One Slight Hitch Sold Out on Nikos Stage 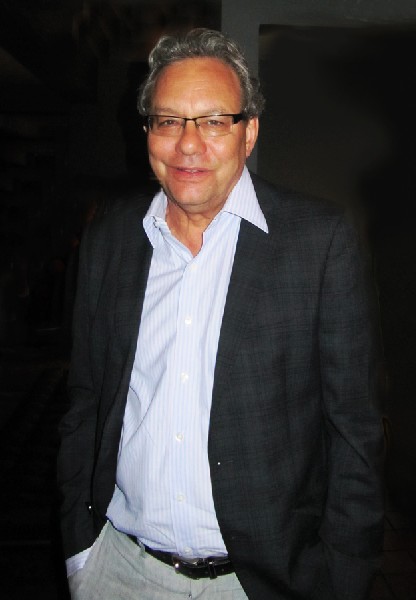 For the past 30 years, off and on, Lewis Black has worked on One Slight Hitch. Giuliano photo. 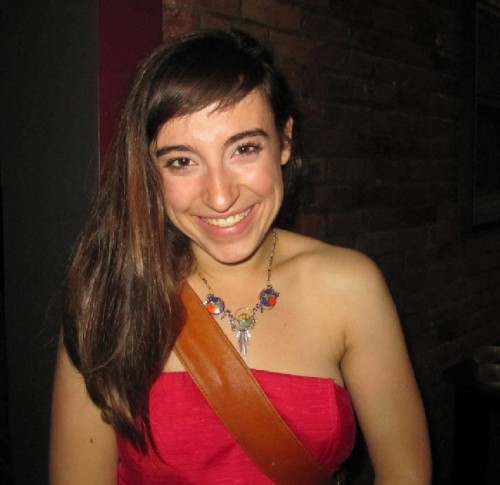 Jeanna Phillips has a bright future as a comic actress. Giuliano photo. 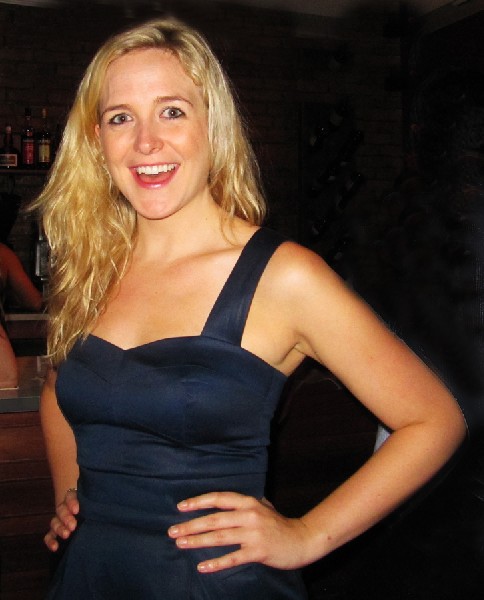 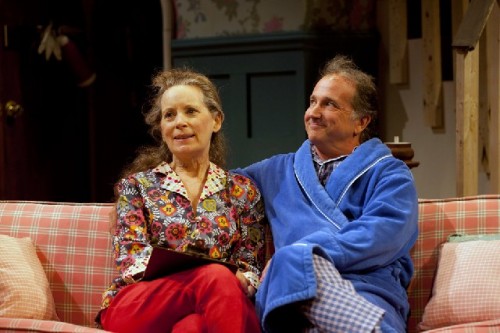 Delia (Lizbeth Mackay) and Doc (Mark Linn-Baker) how that Courtney has the wedding that they never had. T. Charles Erickson photos. 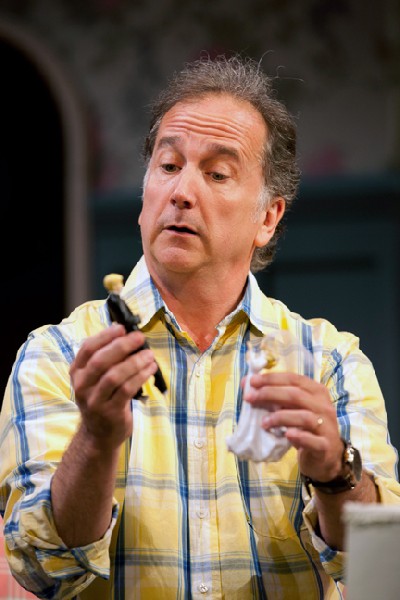 Doc plays with the figures on top of the wedding cake. 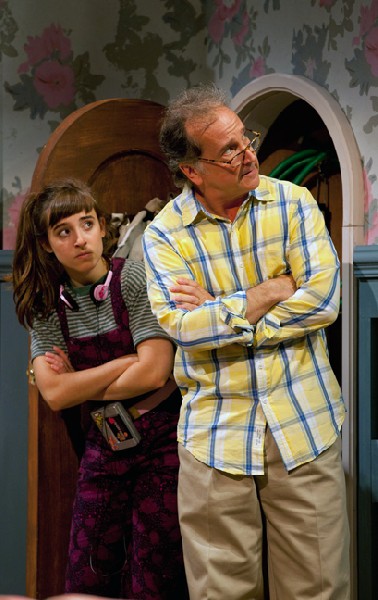 The comedy rocks in scenes between Doc and D.B. 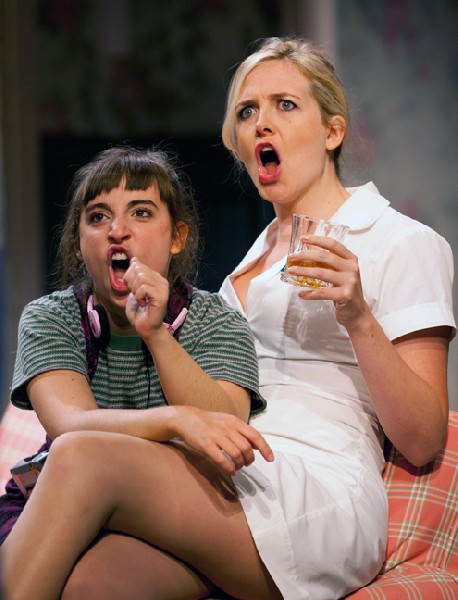 More than age separates these sisters. 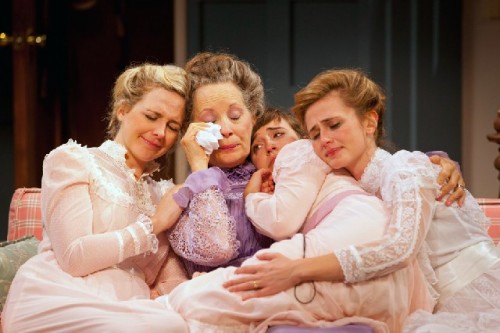 Having a good cry. 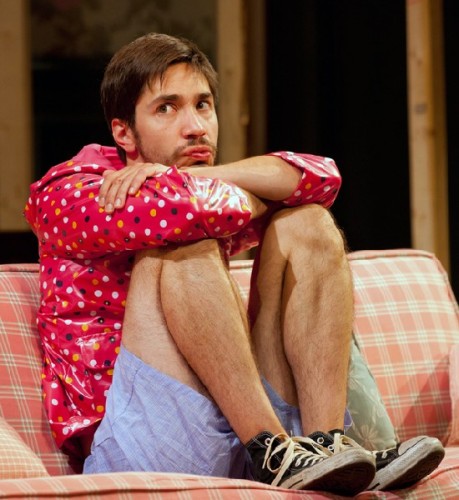 Ryan (Justin Long) is oddly attired while his clothes are inadvertently laundered.

Standup comic, Lewis Black, sat down long enough over the past 30 years, off and on, to write a play “One Slight Hitch” which may still be described as a work in progress. He was writing and editing scenes, including the finale, while the play was in rehearsal under the direction of Joe Grifasi.

Last night, at the Williamstown Theatre Festival’s opening night, there was a rare instance of delivery meeting up with expectation. Even before the reviews are in the comedy, boosted by the star power of Lewis Black, has sold out for its too brief, two week run on the intimate Nikos Stage.

Yes folks, this is a hilarious evening of theatre. It’s going to be real tough to get tickets. But if you know someone who knows someone don’t miss this comedic bon bon. It is surely the great escape of the summer theatre season.

While we endorse this production as a full tilt, flat out boogie, to be fair, there are some caveats.

As the tale of yet another messed up wedding unfolds you may be getting a sense of déjà vu all over again. There is nothing new or different about the trope of wedding mishaps.

We have the bride Courtney Coleman (Megan Ketch) flipping through changes with her sisters, the older and tougher Melanie (Clea Alsip) and he spunky kid sister P.B. (Jeanna Phillips) as well as her ditsy Mom, Delia (Lizbeth Mackay). Mom just wants to marry off her eldest and is agonizing over details such as the flowers that are not delivered and shrimp boats melting prematurely in the back yard of a scorching Cincinatti summer’s day. It is the wedding that she and Doc (Mark Linn-Baker) never had.

The fly in the ointment entails the unexpected appearance of an old boyfriend Ryan (Justin Long) who is hitchhiking cross country and just drops in. During three years of squalor, as would be writers in the Village, he was a nice guy well liked by Courtney’s family. He is starting yet another novel while she is mastering the short form and has had a story published in the New Yorker.

Doc doesn’t want to let Ryan in, particularly with the potential to screw up the wedding. But Ryan needs to use the bathroom wicked bad. Once admitted, add a shower. Then the comedy entails hiding him from Delia and Courtney. The attractive surburban, middle class set by Robin Vest offers the traditional, more or less, five doors of farce. With the resultant discovery and expectations. The first act ends on a sustained sound riff as Mom, her hair in rollers, screeches upon discovering Ryan. The audience howled in laughter.

While Courtney has tried to make it as a writer she appears ready to give that all up for the security of a well bred stiff Harper (Ben Cole). We wonder what she sees in him other than a bailout from trying to make it as an artist. There is little or nothing endearing about Harper either as a character or as performed by Cole. With a really phony accent he is just out of sync with a well meshed cast. It makes liking Ryan a bit too easy and obvious. Everyone loves Ryan except Courtney. That’s supposed to be funny.

So that’s more or less it for plot in a nutty shell. Pretty flimsy, overall, even after three decades of rewrites. “One Slight Hitch”  reeks of a pilot for a sitcom. Perhaps, a very successful one.

Then there is this 1980s thing. Looking back I can’t recall 1981 as having been all that notable. Not like the ‘60s fer shure. The big movie was “Raiders of the Lost Ark.” It was the era of “Dallas” on TV. The big song was “Bette Davis Eyes” sung by Kim Carnes. I did a phone interview with her but she was a one hit wonder.

There are some great lines in this play. Black is a terrific comedy writer. But a lot of what makes this production so hilarious is not on the page. There seems to have been a lot of improv and creative directing between a really incredible cast and a brilliant director in Grifasi.

The play opens and ends with the ersatz disco queen P.B. She is in constant, hilarious gyration to the disco beat coming from her Walkman. Why just walk when you can dance, dance, dance. Jeanna Phillips is the great discovery of this production. Whenever she is on stage we  never stop laughing. Remember the name. Phillips is an absolute comic genius. During the after party I asked her age and was surprised when she said “21.” Playing a 14-year-old? With a laugh she said “I hope so for the next 20 years.” You go girl. She is a member of the Non Equity WTF Company but not for long. This kid has star quality.

Here and there the play lags through scenes of plot exposition. Even in a farce there is a story line to advance. Including a rather long and serious monologue by Delia when Courtney, sobbing in a wedding dress by Susan Hilferty, declares that the wedding is off. Neither the looser ex, Ryan, charming as he is, or the sortah handsome and well heeled Harper, will do. She has to find herself as a woman and writer. It’s that ‘80s thing. Harper has been jilted but he now has the theme for his graduate psych thesis.

Mom gets serious about her generation minding the home front while Doc was off in the Big One, WWII. With a dash of Archie Bunker’s Edith she conveys an era of sacrifice and women wondering whether at the end of the war there would be a wedding or a funeral. Delia wants Courtney to have the wedding that she and Doc never had. They got hitched but without the requisite trimmings. In his uniform Doc was “the best dressed member of the wedding party.”

Kind of heavy duty stuff for a farce. Then Mom and her three daughters curl up on the couch for a big cry. The bathos ends deliciously with the perfect timing of Doc entering in a Tux ready to give the bride away.

Linn-Baker is a wonderful comic actor. He saved many a flagging moment during the evening. The play falters when Linn-Baker and Phillips are absent from the stage. The laughs just tumble out in gales when they have scenes together. You could build a sitcom around them that would run for centuries.

To cope with the stress of the wedding day all members of the Coleman clan hit the sauce. Except the kid who is budding for sure. Mom doesn’t drink than much, compared to the other goldfish in the bowl, but she has been into Doc’s stash of pills. He has the cure for everything. Including living with four women under one roof. He informs us that men are designed to fail. I resemble that.

The most hilarious moment of the evening, other than P.B.’s disco riffs, entails a scene between Doc and Ryan. Things are falling apart as Ryan smokes and Doc hits the sauce. Not having smoked in decades Doc asks for a drag on the butt. This leads to a vaudeville routine as they exchange the cigarette and Doc’s glass of scotch. They go back and forth so brilliantly that the audience burst into applause. Absolutely classic comedy.

The production makes a lot of taking Ryan’s shirt off. It reveals the sculpted Michelangelesque abs of Justin Long. It is clear that he works out. If Courtney doesn’t want him sister Melanie drools over him. She is broadly played as a randy nurse.

While Black was not on stage his presence will be felt at WTF. He hosts the Cabaret tonight as well as on July 21, 22 and 23. He will perform a standup benefit on the Main Stage at 7:30 on Monday, July 18. Tickets are $100 each for a good cause.

It may have taken decades for Black to get the play into its current shape but he has written 40 others.

Based on two weeks of sold out shows “One Slight Hitch” may finally have the momentum to reach Off Broadway. That may take another rewrite. After 30 years, what the heck.

Catch it while and if you can. At WTF, with that terrific cast, it will bust your sides out.