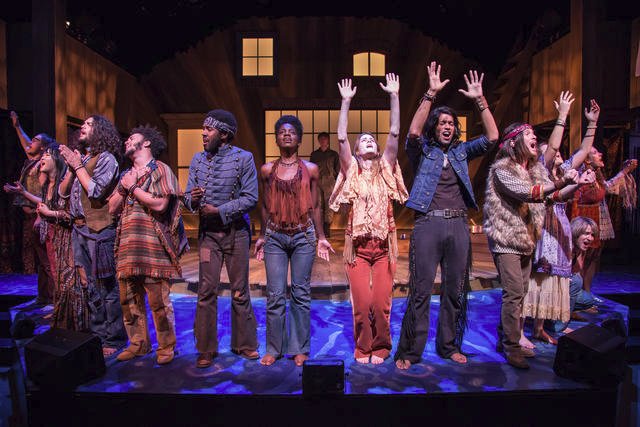 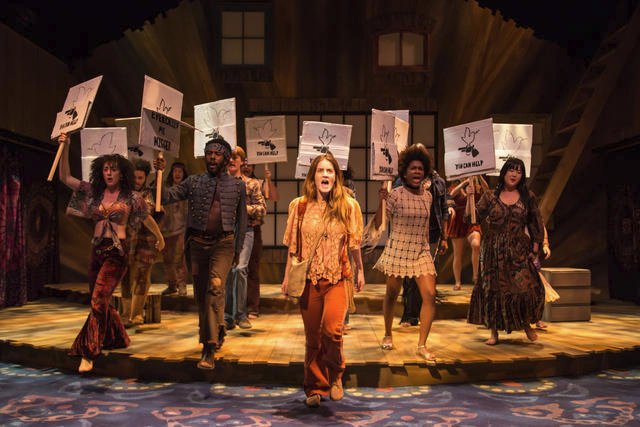 OMG! Is Hair the iconic, hippie, rock musical really fifty years old? Actually plus one as it opened during the Summer of Love in 1967.

In those decades since what has happened to America and its Age of Aquarius?

On many levels there has been enormous interest in the arts and media evaluating that time of love, peace and happiness. The pill, pot, and LSD contributed to a zeitgeist of free love and ersatz brotherhood. At a Be-in a perfect stranger would approach and ask “Hey man, can I have a hit on your joint.”

The macabre downside of long hair, protest, and sexual experimentation was the horror of war in Vietnam. In the streets, communes and tribal gatherings there was Tim Leary’s mantra of “Turn on, Tune in and Drop out.” Too many of the valiant youth of that generation came home in body bags. Those returning from war were not embraced by a divided nation. PTSD was a term we came to know with so many suicides as well Vets homeless on the mean streets.

A riveting theme of Hair is that one of the Tribe, Claude (Andrew Cekala), a confused straight kid, with seemingly few options, is drafted and ends up answering the call to serve his country. The arc of that story line provides conflict and plot to Hair which primarily feels like a musical revue.

There are 22 songs in the first act and another 14 in the second. With a fifteen minute intermission the running time is plus two hours.

The world has changed fifty years later. Former hippies are now senior citizens. The nation is meaner, less humane, more conservative, hypocritical and fundamentalist. The right wing regime puts undocumented in jail and their children in cages. The cost of living has made dropping out all but impossible. Kids can’t just groove on cheap rent and a macrobiotic diet of brown rice. STD’s are way more dangerous.

Seeing Hair on the small Unicorn Stage is mostly a nostalgic trip down memory lane. This version is so benign that it evokes little of the revolution and outrage of when it was fresh and exciting.

Initially, the nude scene was a really big deal. Under director Daisy Walker it ends the first act “Where Do I Go” at the back of the stage in the dark. When the lights come up for intermission we see a pile of clothing. What a friggin cop out!

When the road company of Hair came to Boston Dick Sinnott, the official city censor, did his best to have the show famously “Banned in Boston.” I knew Dick and he was an ok guy with a sense of humor. He was under the thumb of the all powerful Archdiocese of Boston. The show ran with a fully illuminated nude scene for two years. I remember it well.

Also “Sodomy” sung by the skanky Woof (Will Porter) and the Tribe runs through its shocking litany of sexually explicit terms but without accompanying gestures and bawdy language. Those words shocked audiences in 1968. Arguably, then and now, those who can afford to attend theatre are not hippies and dropouts. Looking about last night it was evident that Hair does not preach to the converted. Perhaps that’s why this production seems a bit precious and antique.

But then, I’m among the converted. Fifty years ago I was a dropout and stoner. That ended 25 years ago. Many wonderful moments in Hair brought back warm memories.

That started with the first song “Aquarius” which was sung exquisitely by Latoya Edwards as Dionne. In general, the voices of this superbly talented cast were excellent. As was the musical direction of Eric Svejcar. There was a great rock feeling to the four piece band including delicious guitar licks from Emil Werstler.

There were exceptions like the Jimi Hendrix Experience. He appealed to a primarily white audience, as did Sly and the Family Stone, and, of course, The Supremes. They were more crossover than soul singers Otis Redding, James Brown, Marvin Gaye, Aretha Franklin, Smoky Robinson, Ray Charles, Stevie Wonder, Sam and Dave, Wilson Picket, Joe Tex, the Four Tops, and others.

In that sense Hair is more fantasy than reality. A better take on the 1960s is the Ken Burns PBS series on Vietnam. It is better to approach Hair as art rather than as history.

The cast is game in taking on an era, social and political attitude that is clearly unfamiliar to them. The portrayals are generally authentic and might easily have lapsed into parody.

The dominant character and performance is by Brandon Contreras as Berger. He is the heart and soul of hipness. With long straight black hair, and a big chunk of Navajo jewelry, he is an ersatz Native American member of the Tribe. A large man with broad gestures and an imposing delivery he absorbs our attention. There are some awkward moments and difficult mood transitions but, overall, this is an actor to keep an eye on.

In particular the performance of Eric R. Williams as Hud was outstanding. He has a fine voice and skilled presence. Costume designer Shane E. Ballard has given him paramilitary jackets evoking the style of Hendricks. Back then, we wore army gear as a way of mocking the military and enforcing an anti war sentiment.

While “Aquarius” is the stunning masterpiece of  Hair there are other enduring songs like “Good Morning Starshine” and “What a Piece of Work is Man.”

Of course the finale of “Let the Sun Shine In” is just glorious. “Aquarius” opens Hair with a bang and is superbly bookended by that last song. The cast is spread across the stage in a closing celebration. Behind them stands Claude in combat gear. His exclusion from the Tribe sends an ominous message.

Overall, the costumes of Shriver were tame and restrained. In San Francisco, last year, we saw an incredible Summer of Love exhibition. It contained superb vintage hippie costumes which were more outrageous than those in Stockbridge. Style, invention and groovy psychedelic graphics were essential aspects of Flower Power.

If you plan to see this show, as Scott McKenzie sang in 1967, “If you're going to San Francisco/ Be sure to wear some flowers in your hair.”