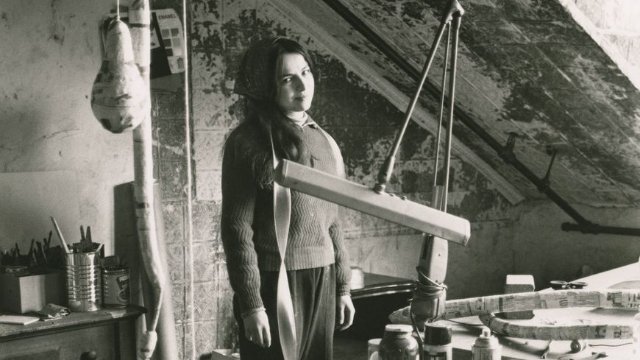 A focused exhibition devoted to influential and experimental artist Eva Hesse (b. 1936, Hamburg, Germany; d. 1970, New York) is on view July 8 through October 16 at the Solomon R. Guggenheim Museum. Eva Hesse: Expanded Expansion is both an examination of the artist’s studio practice and an invitation to explore the transformation and afterlife of a restored monumental work, displayed publicly for the first time in 35 years.

In the late 1960s, Eva Hesse sought to make objects that were neither painting nor sculpture, but a hybrid that was all her own. Simultaneously adopting and pushing against the prevailing Minimalist language of repetitive forms and hard edges, her work is imbued with a haptic experience that reflects her keen interest in materiality and incongruity. To create Expanded Expansion (1969), the show’s central piece, the artist painted pliable layers of natural latex rubber onto cheesecloth panels, and supported them on rigid fiberglass and polyester resin poles, resulting in a massive scrim that expands or contracts to fit its environment. At once commanding and humorous, the towering structure leans against the wall, balanced on a series of awkward “legs”. A short Guggenheim-produced documentary chronicles the piece’s restoration from its status as “unexhibitable,” detailing the museum’s vast research, dialogue, and meticulous conservation processes.

Accompanying Expanded Expansion is a selection of smaller experimental works that reveal Hesse’s skillful hand and visceral manipulation of materials. Visitors are also given a rare look into the artist’s working and living space through unedited footage captured on film by Dorothy Beskind, and in an interview with Hesse by art historian and activist Cindy Nemser—uncovering the artist’s ideas about the connections between her life and her art:

“I remember always working with contradictions and contradictory forms, which is my idea also in life, the whole absurdity of life, everything for me has always been opposites, nothing has ever been in the middle. . . . it was always more interesting than making something average, normal, right-size.”

The show surveys the temporalities of exhibition and interpretation, elucidating the contextual nature of perception and the complexities around preservation and stewardship. Hesse was well aware of the fragility of her chosen media, yet ambivalent about their accelerated demise over time, leaving the museum with a lasting question regarding her feelings about Expanded Expansion’s physical changes. Despite its shifts in color and increasing rigidity, the piece still holds tremendous power as a testament to the pioneering artist who, despite her untimely death in 1970, left a body of work that pushed sculpture beyond Minimalism and Abstract Expressionism, and continues to deeply influence and inspire artists today.