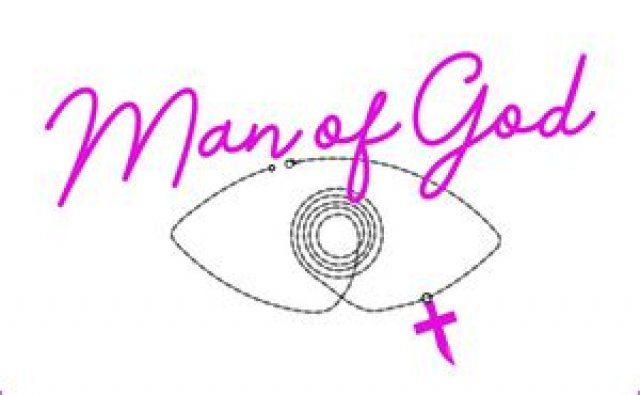 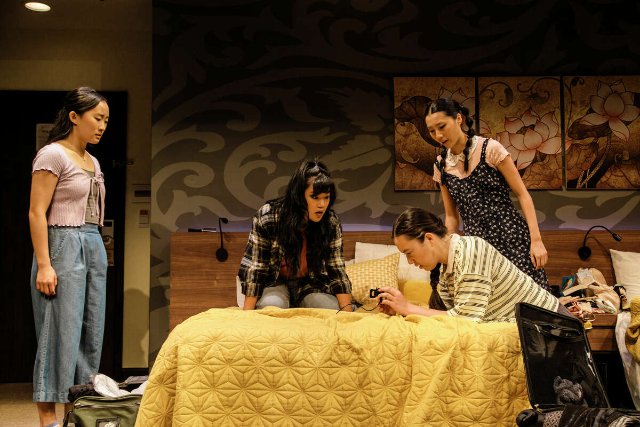 As part of a Christian youth group, led by Pastor (Albert Park), we encounter four Korean American teens. They are bunking (two double beds) in a generic Bangkok hotel room (designed by Se Oh). There is a glass wall looking into a bathroom where significant actions occur. Outside the window a sliver of neon identifies the locale as the red light district.

For the duration of the one act, ninety minute play by Anna Ouyang Moench, the girls are confined to the room. There is a feeling of compression and repression which unfortunately we come to feel as well.

Just what they are doing in that room, and why they have opted for this trip, is never clear. Are they evangelizing. As Kyung-Hwa sees it saving lost souls for Jesus. Or as Mimi puts it passing out leaflets in the market. What has the Pastor offered on this trip in which they seem entirely to be on their own?

We get glimpses of the motivations of the girls (Shirley Chen as Samantha, Emma Galbraith as Jen, Erin Rae Li as Mimi, Ji-young Yoo as Kyung-Hwa). They vary in the depth of their faith while Mimi, the foul mouthed Alpha of the group, appears to have little or none.

Arguably, the most devout is Kyung-Hwa. She is also fragile and vulnerable. It seems that she suffers from bulimia. While on her knees retching she finds a camera placed under the toilet. It is positioned to focus on the genitals of the girls when seated on the commode.

There is understandable panic and revulsion when the discovery is shared. Who could have done this and are there other cameras? There is frantic searching. Part of which entailed a closer look at the small device.

It has a label that reads “Property of New Seoul Christian Church.” There are shades of denial. How is this possible? Can it be that the Pastor has placed it? That’s the question that drives the play as well as the issue of grooming.

It’s difficult to follow the thread of discussion as the girls express their differences by screaming at each other. The sound design (Jonathan Snipes) makes the dialogue ever more shrill and unbearable. The director Maggie Burrows must be faulted for having them perform at this pitch and pace. There is little nuance for the characters who more often appear as a blur of sound and energy.

In a sense that’s a reflection of insecure teens expressing themselves. This is confused by the fact that the four actors appear to be in their 20s although they play down as teens. Samantha, for example, hugs her stuffed animal, while Mimi clutches a pillow.

As the reality of the role of the Pastor sinks in the discussion focuses on what to do about it. They try to reach him but the switchboard is evasive even about his room number. We hear different impressions of him.

For Kyung-Hwa she is comforted when he hugs her but comes to realize that the hugs last too long. Oddly, she reveals that being spied on is not actionable compared to the abuse she experienced from her own family. She spells out the litany of reporting the crimes and then facing in court members of her own family.

These are all too familiar issues which Moench weaves into this oddball “comedy.” She spreads her Me Too agenda over four voices as well as absurdly comical, fantasy acts of revenge.

Given that the Thai police could give a fig about a bit of peeping Tom they decide on murder. Mimi provides discourse on sex tourism in Thailand entailing German men and their ladyboys. She also proves to the others that they are indeed housed in the massage parlor section of town. It’s possible that the Pastor may sell them into the sex trade.

The revenge sequences offer some relief from what has become a claustrophobic screed.

The lithe Samantha engages the Pastor in a sword duel inspired by Kill Bill. The audience marveled at her skill as well as that of the Pastor. He seems to defeat her, as just a weak girl, until she flips and has the sword at his throat.

In another appropriation Mimi, as an ersatz Michael Corleone, shoots him a la Godfather over a bowl of spaghetti. This also evokes a surge of approval from the audience.

The third and most ghoulishly comic approach has the girls in medical gear harvesting his organs in the bathtub. This is accomplished with a small pocket knife as a scalpel.

There are calls through the switchboard to arrange for dinner. There they will slip poison into his meal. But how in Bangkok can they score the lethal stuff? They settle on crushing and dissolving their stash of Xanax.

Caught in such a desperate situation they agree to call home. But they can’t get a signal. There is the expensive option of the hotel phone and the issue of who will pay for the call.

Finally, the Pastor arrives offering an apology. “I take full responsibility” but not for the camera. He has screwed up the departure and they must leave immediately.

Initially, there is debate and resistance but one-by-one they succumb to his authority. The final ten minutes of the play entail tedious silence as they pack and leave. There’s a final twist that we don’t want to spoil.

The play ends in a drawn out and dissatisfying manner. Moench refuses to clean up the mess she has scripted. But it leaves us wondering what happens to the girls when they return home through LA X. Will they be believed? Having been groomed and violated by this Man of God how will they go on with their lives?