Broadway in the Berkshires 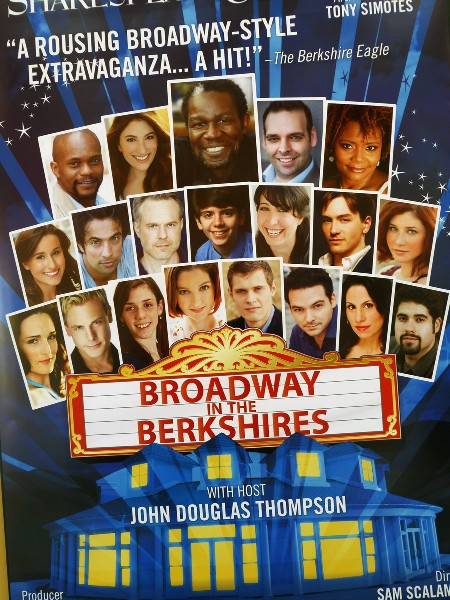 Poster for Broadway in the Berkshires. 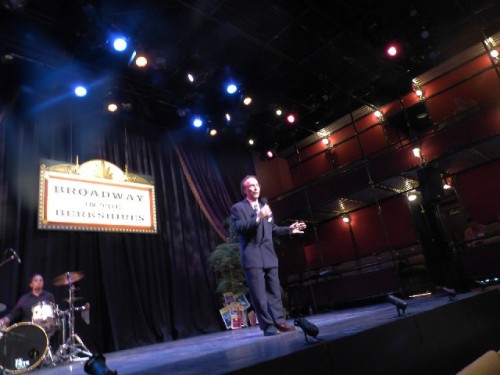 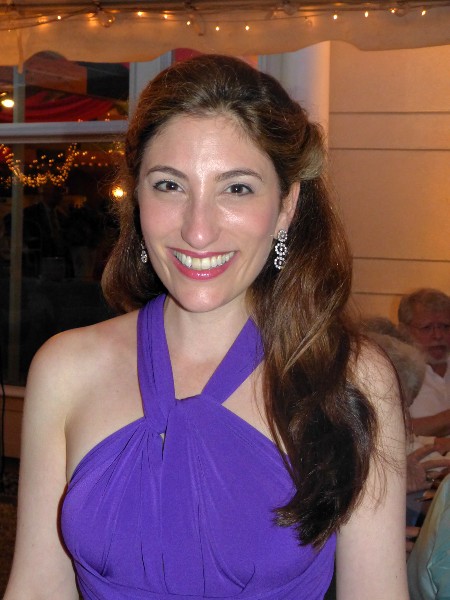 The Gala was organized and produced by singer/ actor Deborah Grausman,. 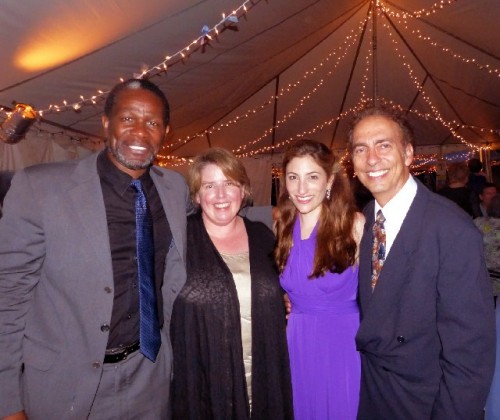 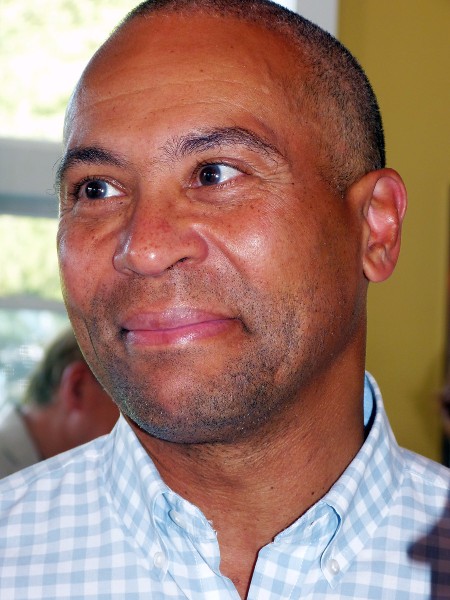 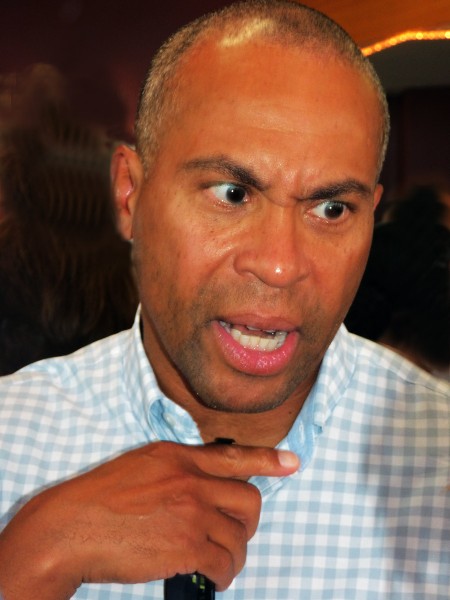 An animated interaction with the Governor. 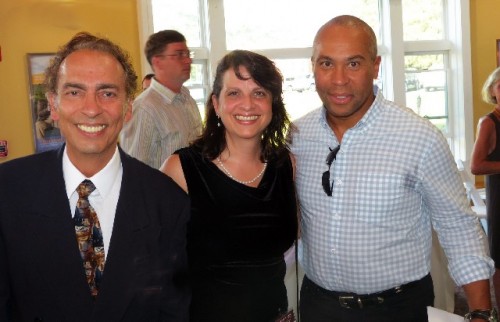 Governor Patrick with Simotes and his wife Lucy. 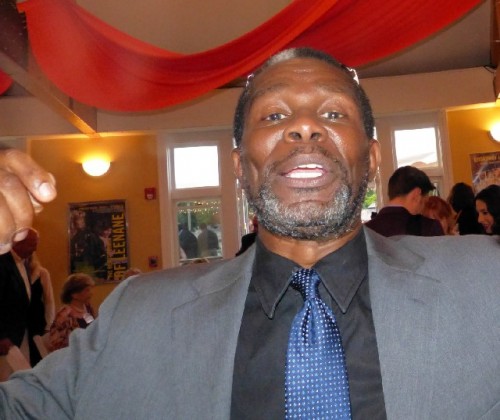 A head’s up from host Thompson. 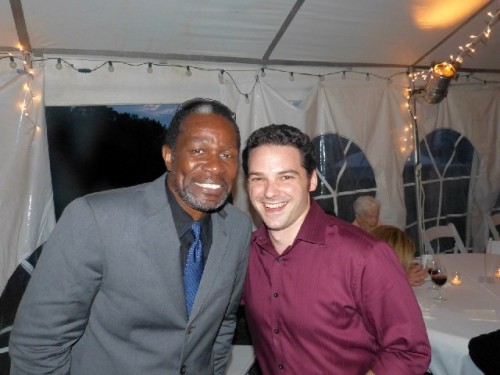 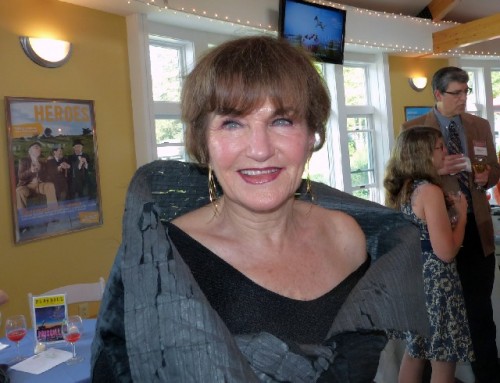 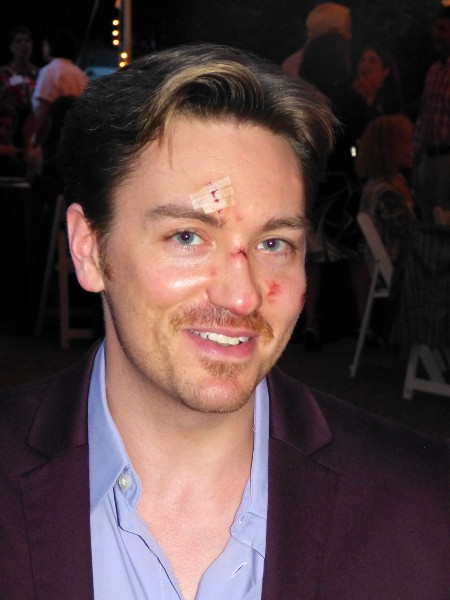 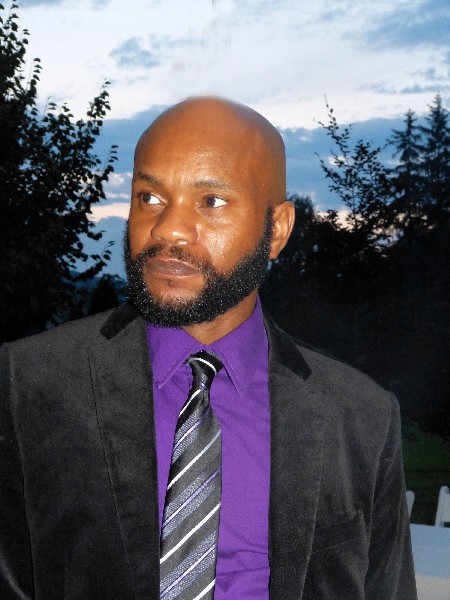 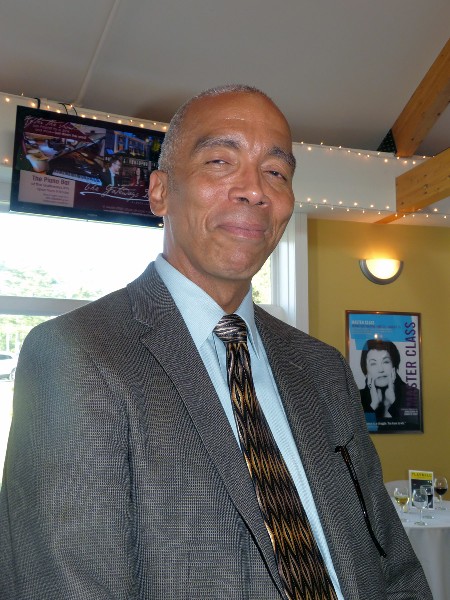 Timothy Douglas is directing Richard II and appeared in The Tempest last season. 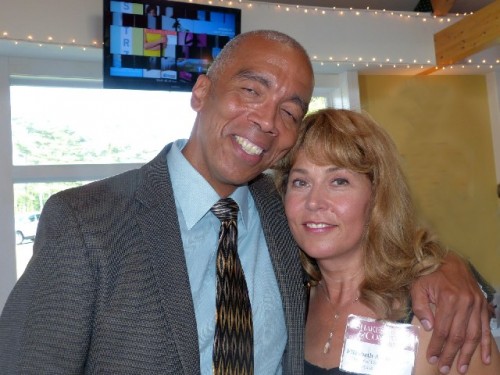 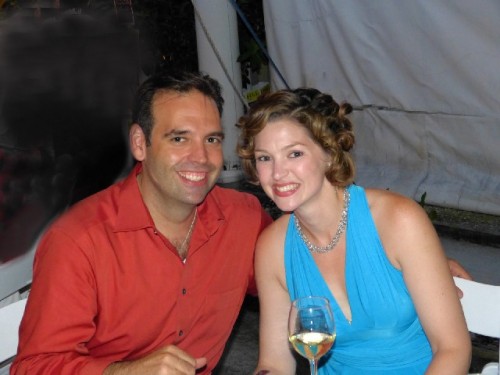 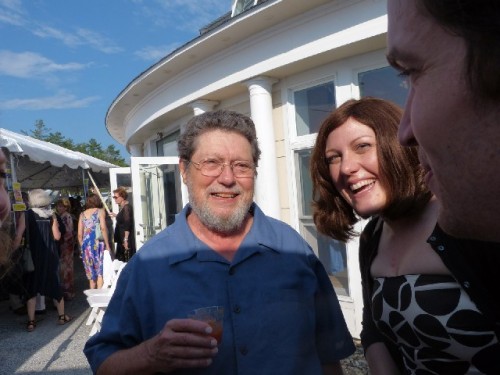 Robert Lohbauer is featured in Heroes this summer. 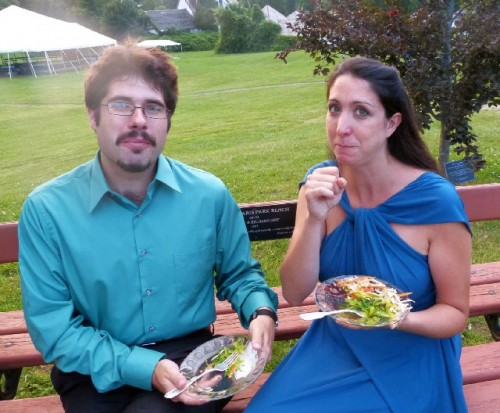 Eleni Delopoulos and Ehren Remal made beautiful music together tie the knot on September 7. 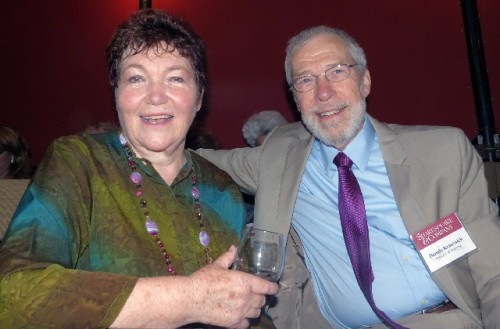 Tina Packer and Dennis Krausnick interacted with patrons and friends. 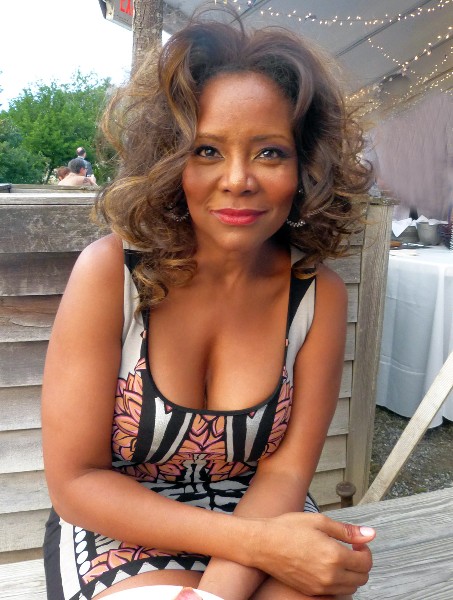 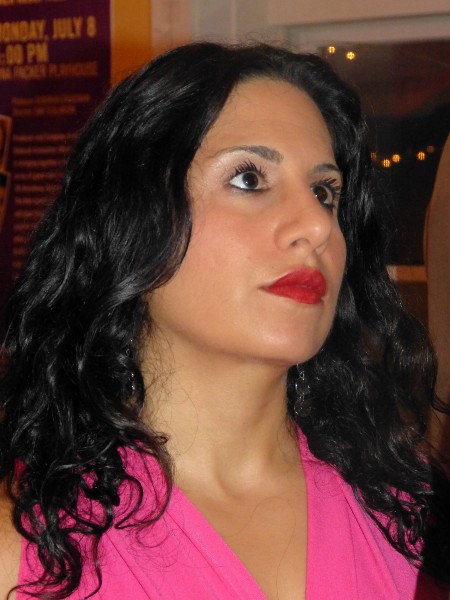 Sarah Corey is an alumna of the Shakespeare & Company Conservatory for Classical Acting.

On a Monday night, when Broadway is dark, singer Deborah Grausman, appearing this season in Master Class, invited some of her theatrical friends to participate in a benefit for the Education and Training programs of Shakespeare & Company.

Both Grausman, and John Douglas Thompson, who hosted an evening of diverse performances, commented that they had participated in those programs which had greatly enriched their professional careers in theatre.

For Grausman, who again has organized a starry gala evening in the Berkshires, it entailed calling in a number of favors. Not just enlisting so many talented performers to appear in the event, but also a couple of items for a live auction.

Over 300 tickets were sold and upwards of 75 Shakespeare & Company artists and other special guests were also in attendance. The benefit raised $110, 000 ($6,100 of which during an exciting on-stage live auction that included two special packages).

Having toured with the remarkable Harvey Fierstein she was able to offer a pair of tickets to Kinky Boots, the Tony winning Best Musical, which he co wrote with Cyndi Lauper. The Kinky Boots package (Two House Seats to the Tony Award winning hit Broadway musical Kinky Boots plus a three course dinner for two with wine pairings at the famed DB Bistro). This package went for a winning bid of $3600 by Robin Gerson Wong and husband Denis Wong, owners of the newly restored Seven Hills Inn in Lenox.

Sweetening the pot, Thompson several times humorously interjected offering to perform the entire Othello, scenes from Richard III, and a complete rendering of “Hello Dolly” instead of just a few bars in his hit solo show Satchmo at the Waldorf.

When that failed to prime the pump Thompson upped the stakes offering to take off all of his clothes and provide a full body massage. Not necessarily in that order. Well, maybe not all his clothes.

That did it. The bidding stopped at around $2,500 and all for a good cause.

As MC Thompson, a last minute substitute for Hugh Jackman, was just fabulous. Introducing the many participants in the eclectic program he read from a script. But often deconstructed the text and provided hilarious ad libs.

It was the first time that we have seen the remarkably disciplined Thompson so totally and irreverently off book. He has been studying clowning. Given this over the top performance he appears ready for comedy.

This summer Thompson is back at S & Co. paired with Olympia Dukakis in Mother Courage. They have already started rehearsals and advance sales have been brisk.

The always sprightly Tony Simotes, the artistic director of Shakespeare & Company, launched the evening and set a festive mood.

Theatre is often described as a family and this is particularly true for S & Co. Many of the actors and administrators, usually dual roles for the company, were present.

Many patrons and friends stopped to chat with founding director Tina Packer and her husband Dennis Krausnick. They are back from extensive touring. Tina has been out with Women of Will including runs in New York and Prague. While Dennis has taken King Lear, which he performed last season in Lenox, on the road.

I asked if being separated for most of the past year had been a hardship? Dennis responded that it gave him an excuse to visit Prague.

Tina, with a knowing smile, confirmed that she is enjoying having more time to perform now that the monkey of running S & Co., after so many years, is off her back. On August 8 she opens with Elizabeth Aspenlieder in Beauty Queen of Leenane.

Looking fit and casual in jeans and shirt Governor Deval Patrick, who lives nearby, appeared to be enjoying an evening of incredible musical variety.

Some of the songs were spoofs written for the occasion. Several actors from the cast of Master Class were featured as well as company regulars like Joseph. It was good to hear them stretch out and rattle their pipes as in the play the Maria Callas character, played by the brilliant Annette Miller, too often cuts them off after just a few notes.

A duet between Grausman and the tall, operatic, Alex Donaldson, was particularly stunning. There were other ravishing pairings including soon to be wed Ehren Remal and Eleni Delopouos as well as old married, well not old but married, Leah Edwards and Dmitri Pittas.

With phenomenal skill Brian Charles Rooney performed a “medley” of iconic male and female roles. Up close we noted fresh wounds and patches on his face. He quipped that they resulted from an audition at nearby Barrington Stage. Later I asked him about it but he declined to comment. It seems there was a recent accident and fortunately nothing was broken. Kudos to him for going on under less than ideal circumstances.

Most of the performances were sung. An exception was a duet, then two solos, by the siblings Peter and Dana Mazurowski. He was one of several actors playing the young Billy Elliot on Broadway. They performed a cabaret pairing followed by her gypsy dance and a ballet solo which Peter choreographed.

Jonathan Rayson brought the house down with a double entendre, gay themed song.

There were so many highlights in a truly fabulous evening.

The show stopper, for me a least, was a riveting and all too brief appearance by Tony Winner, Tonya Pinkins. In addition to a soulful song she read the remarkable letter which, as an 18-year-old, she wrote to the director Hal Prince. It was her first role on Broadway in a show that flopped.

(In 1981, Stephen Sondheim and Hal Prince thought they had a sure hit. They- along with librettist, George Furth- adapted George Kaufman's and Moss Hart's 1934 hit play, Merrily We Roll Along. They put together a great cast of unknowns including, the Broadway debuts of Liz Callaway, Jason Alexander and Tonya Pinkins. For whom Sondheim wrote a bevy of wonderful songs. It opened to great applause, tremendous reviews and became a long running smash...except that it didn't.

(The show opened to mixed reviews, with Frank Rich in the New York Times calling it "a shambles." Ticket buyers stayed away, and the production ran a mere 16 performances. It was one of Prince's and Sondheim's biggest failures.)

In the letter she thanked Prince for his trust and support. Lamenting how just five critics could shut down a show that was so ahead of its time. She added that the Sondheim musical is currently a hit in London.

Don’t it just rip your heart out.

Kudos to Shakespeare & Company and its remarkable education and training programs that provides the aspiring and talented next generation opportunities to share in the agony and ecstasy of a life in theatre.