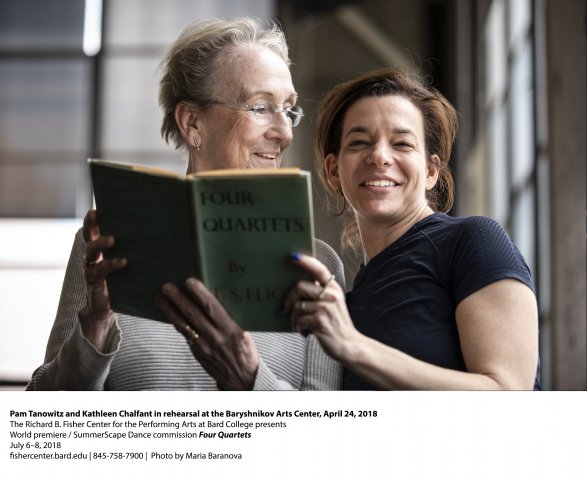 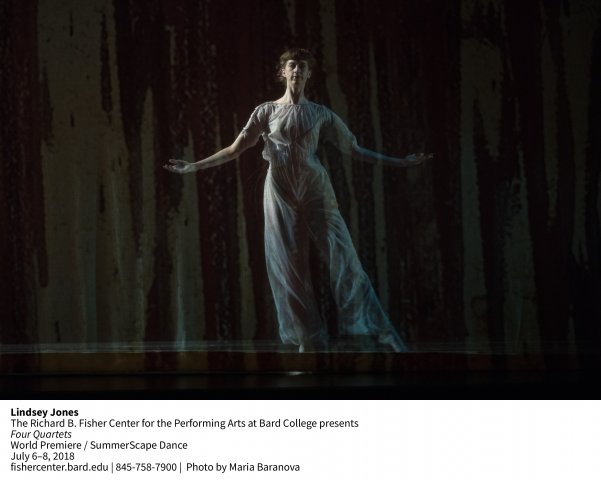 Lindsey Jones speaks with her body in Four Quartets 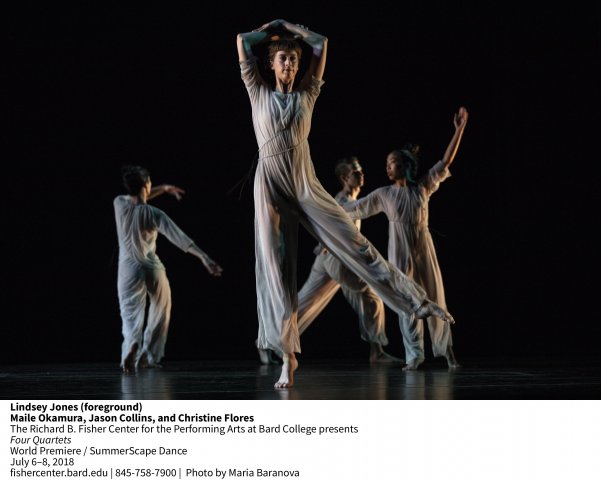 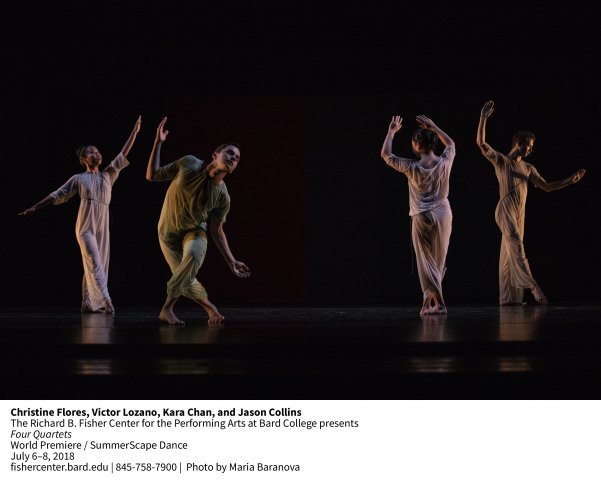 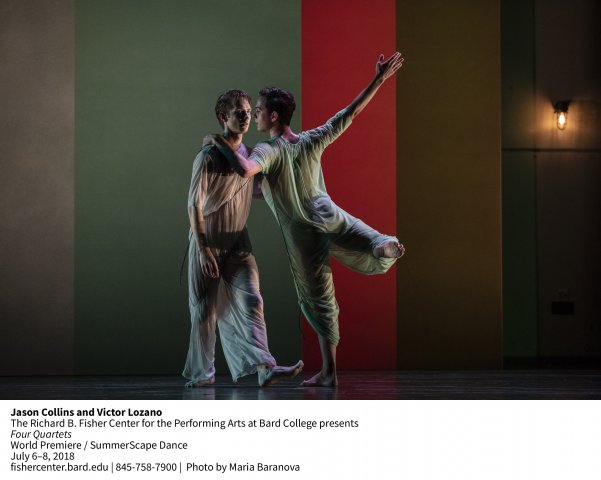 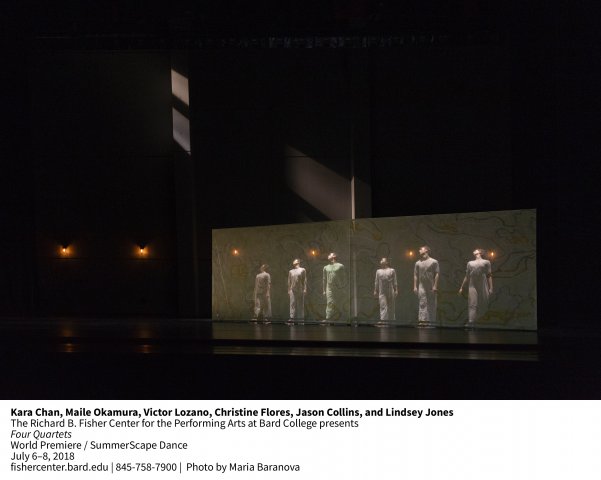 Kara Chan, Maile Okamura, Victor Lozano, Christine Flores, Jason Collins and Lindsey Jones give us time past and time future wrapped up in the present. 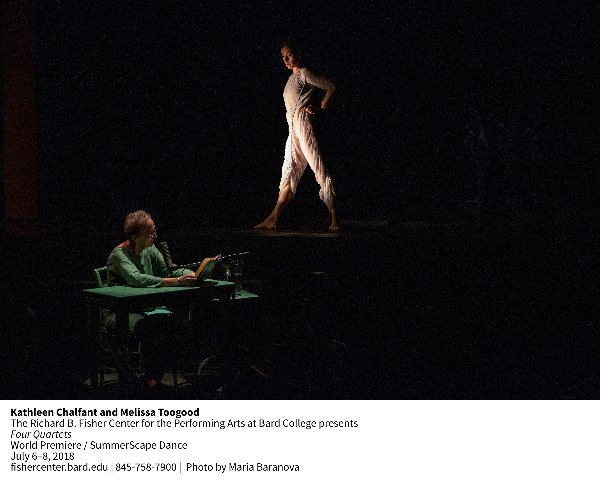 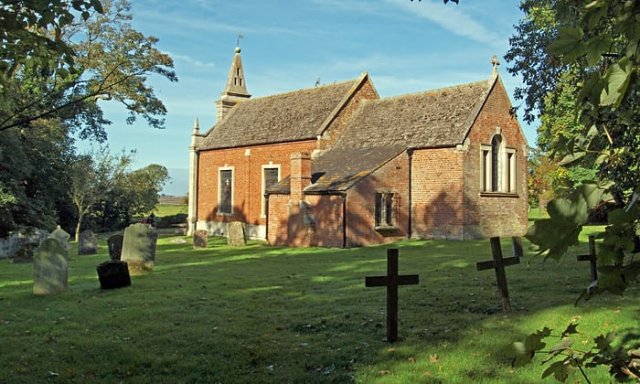 St. John the Evanagilist is an important character in Four Quartets. Here is the church named for him in Little Gidding, Cambridgeshire. Eliot found a sense of timeliness here.

Martha Graham once choreographed one of the Quartets but she could not get permission to mount it. Of course, Graham's idea of dance based on words was to use the music of Alexander Scriabin. Saariaho's music sets the timeless, spectral space of Eliot, but is not used as a prompt for motion.

Pam Tamowitz comes to use the poet's words as her sound template and score. Dancers' bodies interpret the poet's words. This apparently pleased  keepers of the Eliot flame. Not only did they give permission for this production, they invested in it.

Tamowitz and Gideon Lester of Bard's Theater and Dance Department were able to travel to England where three of the quartets are set, They walked the grounds of Burnt Norton, a charming 17th-century manor house, which sits between Chipping Campden and Broadway on the Cotswold escarpment. They also visited East Coker, a village and civil parish in Somerset England, the ancestral home of the Eliots, and the Little Gidding in Cambridgeshire, which Eliot had found timeless. The suggestion that all we have is the moment provides a perfect backdrop for dance, which exists only step by step.

Eliot felt the meaning of words was not enough and their suggestion is extended as they are taken up by the movement of bodies. This choreography is clearly inspired by specific words and short phrases. Words like “turning shadow” and “slow rotation” are noted in gestures of the torso and pelvis. Repeated words jump up as repeated motions. Reversing structures are danced to reversing lines. Decaying is delicious as bodies collapse.

There are times in the dance when you can almost see the empty pools and hedges gone wild as the dancers bend into a circle and fly about wildly. The dancers physically relish words the way the poet does as he reads his work. The words have an elegant measuredness.

Repetition and circles of language become repeated motions and circles of dancing figures. Flowing, gliding, stretching, all the dancers were articulate. Lindsey Jones stood out as a storyteller. Dressed in long, transparent pants which the light shone through to reveal body and movements in varying degrees enhanced the elusive tones.

Kaija Saariaho does not supply music to dance to, but she evokes the timelessness to which the poet is tied in her introductions and bridging passages. An ensemble from The Knights performing with amplified instruments and mixed with electronics wafted other earthly sounds across the Fisher Center. Pressing high and keeping an incessant, earthbound deep pulse, the composer always provides a rich middle range of sound. She creates the four classic elements that make up the work: earth, air, fire and water. Her music ripples and swirls like water, birthing us, carrying and drowning us. Fire both celebrates and extinguishes.

It is amazing that, through the dance and the suggestive periodic notes and phrases, we go neither up nor down, but both. We are surrounded by "a grace of sense, a white light, still" and yet the "slow rotation" suggests permanence.

The artists in coming together bring the quality that Eliot treasures above all others, humility. Kathleen Chalfant reads the work beautifully, looking from time to time to the stage for guidance and rhythms. Transformative moments are brought to the audience one after another, word by word and step by step.