Performing in Person Despite the Pandemic 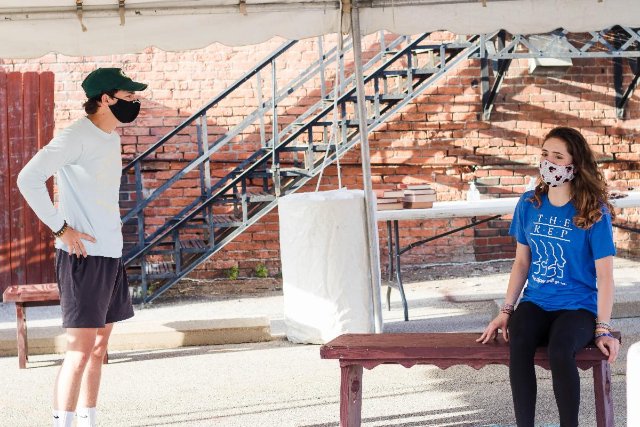 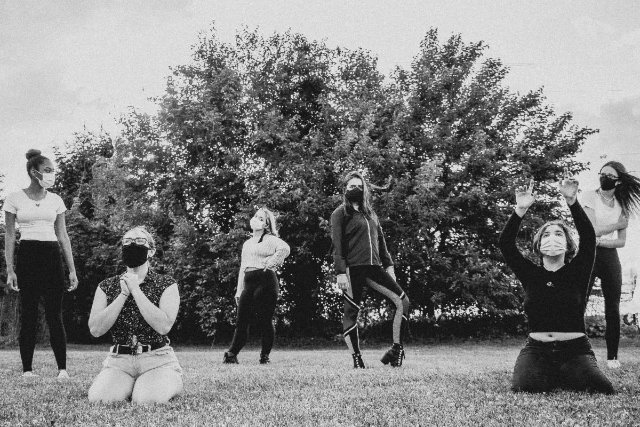 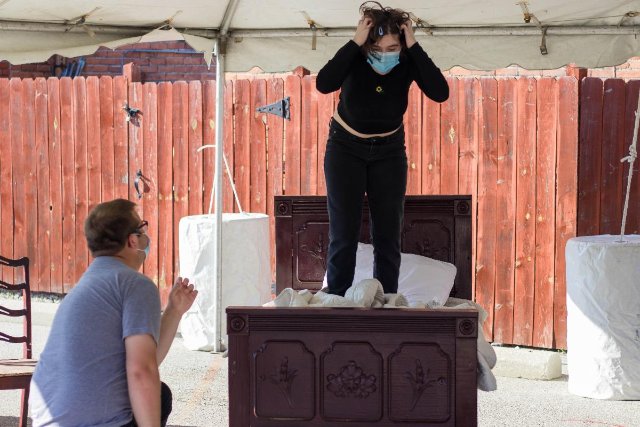 Several Toledo teenage thespians who are performing in person Arthur Miller’s classic, The Crucible, are viewing masks and social distancing as opportunities, not hindrances.

The youngsters, from the Toledo Repertoire Theatre Young Rep group, are appearing in a production featuring four performances. Remaining showtimes are at 7 p.m. Friday, July 10 and Saturday, July 11, in addition to 2:30 p.m. on Sunday, July 12. The company is live streaming the performances on www.toledorep.org.

This production, like some others in the U.S., is live with safety measure compliance. And with careful choreography, including six-feet spacing, mask wearing and no touching, the young Toledo performers seem confident that they’ve created theater safely without sacrificing Miller’s intent.

“I think (other theaters wanting to stage in-person productions) could totally learn from us,” said Cassandra Herrmann, who portrays Elizabeth Proctor.

The Crucible's setting is Salem, Mass. in 1692. The play is a fictionalized version of the Salem witch trials, which actually occurred. The authorities during this time period viewed witchcraft as a serious offense, punishable by death. Indeed, authorities executed many people for “being” witches. In the play, hysteria, hanging, accusations, and revenge swirl around Salem.

Toledo Repertoire Theatre’s teen group began rehearsing on Zoom. However, they eventually decided that performing in person would prove more powerful than a virtual production.

“There’s no match for the energy (that comes with) performing in person,” said Sydney Schauwecker, who is playing Abigail Williams.

But they had to use that energy differently and think differently. With that in mind, the performers used distancing and masks to convey aspects of their characters that they otherwise might not have explored. For instance, in the teens’ production, John Proctor doesn’t touch Abigail because he doesn’t want to worsen his situation. Specifically, John is harboring a secret and struggling with inner demons. So, it makes sense that he's keeping to himself to avoid making another wrong move. Meanwhile, Abigail doesn’t touch John; she doesn’t want him to get mad at her. As for John’s wife, Elizabeth, she doesn't touch her husband because she doesn’t trust him. Also, Schauwecker said that during the play, Abigail and John fight. But instead of grabbing John by the collar, Schauwecker stands on a platform while yelling at John.

To illustrate another example, Herrmann said a powerful moment occurs at the play’s end. Specifically, authorities lead John to his death by hanging. Obviously, Elizabeth’s instinct is to run up to her husband and hug him one last time. Instead, Herrmann’s Elizabeth reaches toward John with a longing expression on her face. This character choice not only complies with social distancing, it makes sense from a character perspective, Herrmann said. Since John is in custody with authorities, these severe and closed-minded officials might not allow Elizabeth to approach, let alone hug him.

As for masks, the cast is using them to identify the characters’ role in the show. For instance, Judge Danforth, and the young women who accuse others of witchcraft, wear red masks. This signifies evil. By contrast, Elizabeth wears a light pink mask. This reinforces her innocence. Director Zatko said that when audiences first see the actors, the masks may stand out. But as the production progresses, the goal is for the masks to become part of the characters.

Actually, the masks provide at least one light-hearted moment, Schauwecker said. Specifically, it comes when Abigail says to John, “Aye, my face. Can you see my face?” Obviously, the answer is that he can’t. Therefore,this moment provides comic relief in a mostly-dark play.

While distancing and mask requirements allowed cast members to make different character choices, the COVID-19 requirements presented challenges. For instance, cast members had to ensure that they spoke loud and clear enough behind their masks for audiences to understand them. In addition, Zatko had to choreograph every move to ensure the performers were maintaining proper distance. In fact, Schauwecker described rehearsals, in part, as choreographing “a big dance number.” However, Schauwecker added that she and her cast mates learned and were comfortable with the staging fairly quickly.

“Julie’s a great director, so she made us very comfortable very quickly,” the young actor said.

Cast members used a tape measure at every rehearsal to ensure that they were standing at least six feet apart. There were some tense moments during rehearsal. One of them involved Schauwecker. During the first rehearsal, she was so “in the moment” that she walked toward Proctor. As a result, “everyone started yelling” to remind her about the distance requirement. The reason Schauwecker was so “in the moment” is because that’s how she acts, she said.

“As an actor, I had to rewire everything I knew,” the teenager said. The distancing rules were “frustrating as an actor,” she added. Even so, the performers rehearsed and are performing together in an outdoor amphitheater. Within the large space, the theater is limiting spaces for live audiences to each performer’s immediate family. Others wishing to watch a performance can do so on Toledo Repertoire Theatre’s website. Find it by logging onto https://www.showtix4u.com/event-details/38545.

Schauwecker said she is thrilled to perform in The Crucible. She learned about the opportunity after another company cancelled a production of Charlie and the Chocolate Factory.  Schauwecker was poised to perform the title role.

“I was so blessed to have The Crucible to fall back on,” she said. She added that Abigail was a “bucket list” role for her. Why? She’s attracted to the part because Abigail has many layers. Besides, she said she loves classic literature, and so the opportunity excited her.

“It turned out so fantastic,” Schauwecker said. “I feel I’ve learned so much about acting” as well as body language.

“I’ve had a lot of fun,” Farrugia said. “I’m beyond blessed that we’re performing at this beautiful amphitheater. if I could play the role again, I would absolutely love to.”

Cast members said that during rehearsal, they tried not to think about health officials possibly shutting down the production due to new coronavirus directives.

Health officials never showed up. And so, the show is going on.

To some audiences, this production might look different from a pre-pandemic one.