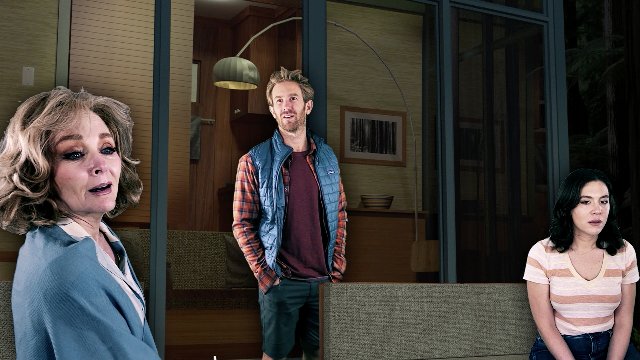 Tiny House, the play that is being streamed by Westport Country Playhouse through July 18, is a puzzle.

Is it meant to be an extended metaphor? A family drama? A comedy? Or what?

Despite fine acting and directing and a lovely set, that uncertainty sinks the play.

Playwright Michael Gotch uses the current trend toward tiny houses – those houses that are under 500 square feet (and often smaller) that forces closeness and massive downsizing of possessions.

Nick and Sam have moved into a tiny house designed by Nick, an architect. It is located deep in the words in New York State and Nick is enthusiastic about their soon-to-be accomplished goal of living totally off-the-grid. No electricity, no internet, nothing.

Even at the beginning, Sam seems less enamored with this lifestyle – or perhaps she is still in mourning for their baby daughter OR unhappy about the anticipated visit of her mother and her uncle OR just depressed. Who knows? We don’t every get to figure it out.

Of course, there must be a backstory. Sam’s father is in jail for an enormous Ponzi scheme (reference is made to Madoff). Not only did the scandal derail Sam’s career, but she is convinced her mother “had to know” and seldom sees or communicates with her.

Bur it is the Fourth of July weekend and her mother (Billie) is arriving along with Sam’s uncle Larry, her father’s brother, a high school science teacher. Perhaps Billie and Larry are now couple OR perhaps they are just friends.  Does Billie want money? Sam is convinced she does. Like Mrs. Madoff, Billie was stripped of her possessions and money.

Nick has invited their aging Hippie neighbors Win and Carol to the dinner, without asking Sam. She views it as a possible disaster. And then there is Bernard, their neighbor higher up the mountain, who stops in proffering a dead muskrat and warnings of coming catastrophes.

What we have is a mixture of comedy as Billie calls the place “Brigadoon with pine needles,” Stephen King hints of horrors (Bernard takes Nick off into the woods), drugs (Carol has brought a cake that contains a variety of hallucinogen agents) and drama as Sam and Billie one up each other about the public shaming each faced after the scandal was made public. Someone slapped Sam on the subway.

The cast tries desperately to hold all these disparate elements together. That they fail is not the fault of them or even Mark Lamos, the director, but the play itself.

It’s just that it raises more confusion then it resolves. Why is it so important that Billie had been a playboy bunny at a Playboy Club as a young woman?  Why does Larry, who has obviously been a teacher for decades have to work a back-breaking summer job? What is going on in Nick and Sam’s marriage? Is Bernard a former CIA agent or just a poseur (perhaps like Sam’s father)?

Perhaps the playwright is creating a microcosm of our world where extremism, lack of empathy and alternative interpretations of reality are the norm. Or is it all about environmental issues?

The production with a set by Hugh Landwehr is good and certainly the editing is excellent. It is hard to tell that the actors were filmed separately and it was all put together in the editing room.

We could ask why that was necessary. Other theaters are now filming productions with the cast together on a stage. While well done, it does give a very “fake” atmosphere.

The cast has a difficult time with these characters who seem more like cardboard figures than really people. Certainly Hassan El-Amin gives Bernard the requisite sense of danger and Sara Bues gives Sam a glum and angry demeanor. Perhaps most successful is Lee E. Ernst as Larry with his enthusiasm for all things science and Elizabeth Helfin who gives Billie more dimension.

But it all boils down to: What is the author trying to say? When that isn’t discernable (it doesn’t have to be clear) good direction, great production values and good acting can’t overcome the obstacles.