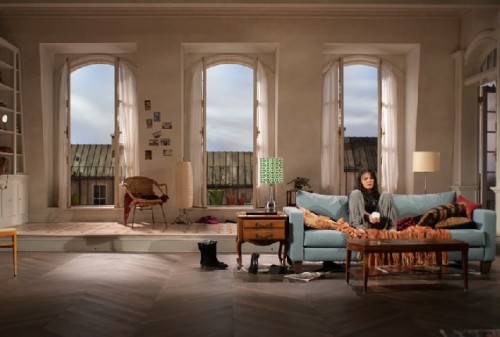 Abby in the living room 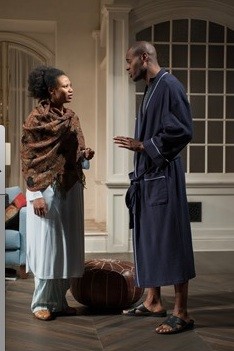 Alana Arenas and Chris Boykin are the plodders in this play.

The Belleville section of Paris, in which Belleville by Amy Herzog is set, is known as one of the hotbeds of the Revolution of 1848, as an ethnic melting pot, and also one of the high points of Paris, literally.  It competes with Montmartre for the best view of the fabled city.

The revolutions that the 21st century has witnessed involve the ascendancy of black people, the fiercely heterogeneous cultures of cities and vision, which is rarely as clear as from a mountaintop, and anything but clear in this fascinating play.

The lives of two young couples abut in Belleville.  One is an American couple who have come to Paris because Zach is doing AIDS research.  The Senegalese couple are property managers of the building owned by Alouine’s uncle.  Alana Arenas is both warm and practical as a mother and wife. Chris Boykin conflicted as landlord and dope-sharing friend.

Zach later describes his glue: I felt like I’d won the lotto when you proposed, Abby.  I have done everything to please you and keep this marriage going.

That is the problem, Abby says.

Dark humor highlights the tense dynamic.  When Zach appropriates Abby’s phone, she grabs it back in the middle of a mutual groping.

The direction expresses the accordion spring from far apart to physical proximity.  Yet revelations distance rather than bind.

Particularly striking and apt is the set designed by James Schuette.  It is longitudinal, and serves to separate Abby and Zach, who often don’t communicate as they speak across an almost barren room.  Tucked in a corner at the back of stage left is a bedroom.  We know it is behind the translucent windows because figures, sometimes stationary and sometimes in motion, are silhouetted.

When a conversation is going on inside the bedroom, we hear a muffled voice, but cannot decipher words.  We get the gist of them, because the familiar distance between two people who are partners but do not know each other is so easy to understand.  It reflects many contemporary relationships.

If Herzog is a female Neil LaBute, her characters are more likeable in their ugliness.  They are more fully developed and their tackiness is driven by a wish to connect that is ever elusive, but not dismissed entirely.

Charles Giuliano admired a play of Herzog’s at the Williamstown Theater three seasons ago.   http://www.berkshirefinearts.com/07-23-2010_after-the-revolution-at-williamstown-theatre-festival.htm  He thought we would hear more from her and we have.

Belleville fascinates because the characters operate at once as real and as literary.  Phrases from pop culture often make Kate Arrington's Abby iconic and Cliff Chamberlain's gesturing Zach weaves a desperate web around both characters.

The ordinary couple, Amina and Alouine is left at the end to tidy up.  Plain and all about the business at hand, they are the survivors.

The Americans, self indulgent, apparently sweet and removed from the world may mean more than just a couple unraveling.

Yet, if the play resonates deeply in society, it is always anchored in a human quartet trying to play together without success.  This is an intriguing evening of theater.