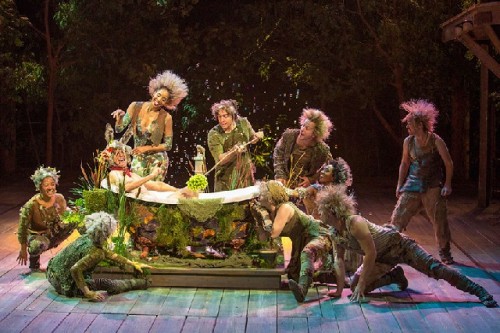 Miles Anderson as Bottom and Krystel Lucas as Titania (third and fourth from left) with the cast of The Old Globeâ€™s Shakespeare Festival production of A Midsummer Nightâ€™s Dream, directed by Ian Talbot, June 2 â€“ Sept. 29, 2013. Photo by Jim Cox. 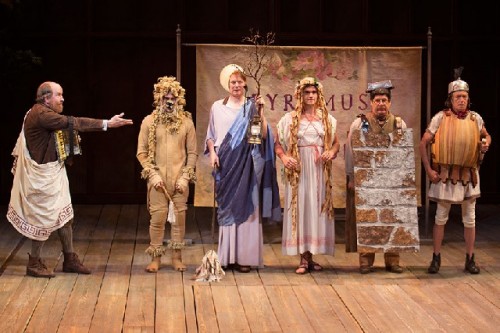 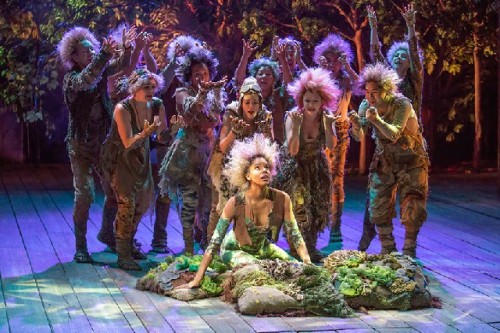 July, August, and September are great months to be in San Diego.  The weather is always comfortable in the daytime, and pleasantly cool in the evenings, which is great for strolling, and is especially enjoyable for audiences of San Diego’s world famous Summer Shakespeare Festival – 47 years young and still counting – which debuted June 23rd, at the Old Globe’s Lowell Davies Outdoor Festival Theatre.

The summer festival produces three productions in repertory-style performance.  The first of two Shakespeare plays:  “ A Midsummer Night’s Dream “ opened last week.    The second “The Merchant of Venice” opened on Friday, June 28th.  Tom Stoppard’s   “Rosencrantz and Guildenstern are Dead” (an almost Shakespeare-like play; after all, the story is based on the characters in “Hamlet” the quintessential Shakespeare play), opened on July 2nd.  All three productions will run through late September of 2013.

It is fitting that “Midsummer…”, creatively directed by Ian Talbot, be the selection to kick off the 2013 Old Globe’s summer festival season.  It’s one of Shakespeare’s most enduring comedies filled with oddball characters and silly liaisons and situations.  For example, there are two sets of human lovers who can’t seem to close their relationship deals.  There is one set of magical lovers who also can’t see the forest of true love for all those pesky trees. Everyone needs a little help to guide them toward their true partners and ultimate destinations. If magic be the solution, then so be it.  It’s the Bard’s paean to love and to the fools that play the game of love.  To steal a title from the Bard concerning “Midsummer…” all’s well that ends well.

It’s also a story anyone can follow and appreciate even if one isn’t completely familiar with Shakespeare’s brilliant rhyme and meter language.  There was an adorable five year-old girl, and her parents, sitting directly behind me on opening night who giggled with glee and delight at the on- stage shenanigans of the various characters. Perhaps, she might be a future theatrical star in the making?  It’s a nice thought anyway

There are twenty-six wonderful performers who comprise the 2013 Festival Company.  Some are returning stars and veterans of past seasons.  Others are new to the Globe stage, thanks to an endless supply of theatrical talent emerging from the Globe’s association with MFA programs at San Diego’s universities and colleges.

The cast of “Midsummer…” led by the internationally acclaimed actor Miles Anderson, playing the sly and comedic Bottom, is ably abetted by the marvelous Jay Whittaker as Oberon/Theseus; a lithe and lovely Krystel Lucas as Titania/Hippolyta; Winslow Corbett as Hermia; Nic Few as Demetrius; Adam Gerber as Lysander; Lucas Hall as a delightfully peripatetic Puck; and Ryman Sneed as Helena; along with an extremely athletic and energetic company of forest fairies.  As an ensemble effort, one would be hard pressed to find a company that works harder than this ensemble does.  And the result of all that effort pays off in a series of strikingly visual tableaux.  The audience just laps up.

As I have said many times The Old Globe has few equals when it comes to the technical arsenal available to their directors.  The creative team led by the inventive Ian Talbot, features the set design skills of the creative Ralph Funicello, the gorgeous costumes of Deirdre Clancy, the lighting designs of Alan Burrett (which always enhances the mood), and the original music and sound designs by Dan Moses Schreier, and music director Elan McMahan.  This time around, veteran voice and dialect director Jan Gist gets to relax just a little bit.  Director Talbot and Festival Artistic Director Noble must have put their heads together and decided it would be okay to deliver the dialogue without the usual RADA imprimatur of the English accent.  Good choice. American ears are more finely tuned to speech that is spoken in the land between the east and the west coasts of this country, and the production isn’t diminished a wit by that decision.

The Festival has been fortunate over the last four seasons to have their outdoor festival productions guided by the immensely talented Adrian Noble, as its Artistic Director.  Mr. Noble turns over the reins at the end of this September.  He leaves the Old Globe with a wonderful track record and a bar set very high indeed.

San Diego’s Old Globe Summer Shakespeare Outdoor Festival is now in full swing through the end of September.  Make sure you attend a performance of  “A Midsummer Night’s Dream”, “The Merchant of Venice”, “Rosencrantz and Guildenstern are Dead”, or better yet, all three productions.  They all run in repertory through September 29, 2013.  Reviews of “Merchant” and “Rosencrantz and Guildenstern” will be covered later this month.