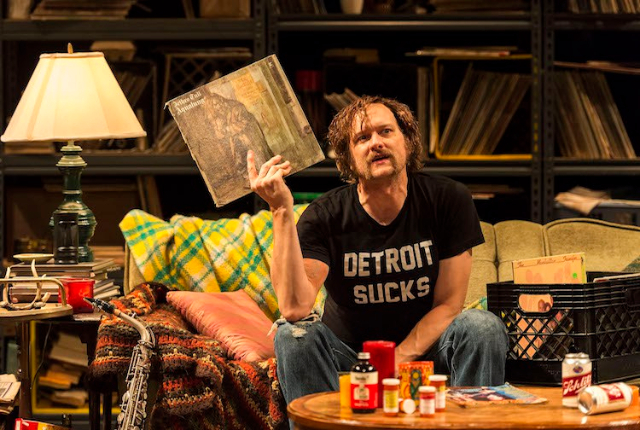 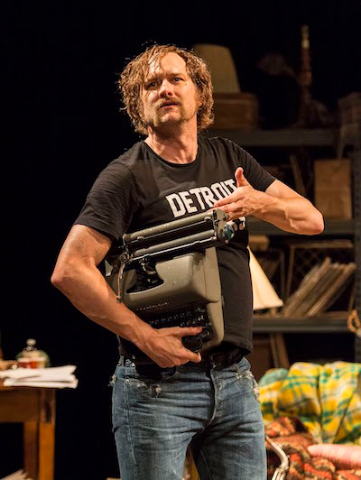 The Smith Corona and its owner.

Two 3CR writers—Nancy and [Karin]—went to see Erik Jensen’s one-man performance of the life and times of rock critic Lester Bangs. Nancy wrote the review and Karin added comments. This is what they thought.

Amidst a sea of beer cans, pill bottles, vodka bottles, cough syrup flasks and record albums, Erik Jensen becomes Lester Bangs, the iconic, profane, rapturous lover of rock and roll music (and hater of anything sappy or sentimental). The sensational new production of How to Be a Rock Critic (Based on the Writings of Lester Bangs) at Steppenwolf Theatre is directed by Jensen’s collaborator and wife, Jessica Blank. Jensen and Blank co-authored the script.

[Like the dual public water dispensers in the snazzy new 1700 Front Bar, we two critics at this opening offer filtered and carbonated, as well as meta, observations on this one-man juggernaut.]

Bangs, unshaven, unkempt and wearing a Detroit Sucks t-shirt, tells the story of his life (raised in a family of Jehovah’s Witnesses by a father who didn’t care and a mother who cared too much). Like many rockers who used music as an escape route from boredom or poverty, Bangs’ life was changed by a song and a sound. His mind was opened to his future when he first heard the Troggs’ “Give It to Me,” a song banned on the radio. Bangs heard “These guitars. Blasting you through the wall, out across the rooftops, straight outta your box into … a troposphering limbo of blizzardnoise at last.“ And once “Give It to Me” was banned, there was always the Troggs’ “Wild Thing.”

[“The whole point of rock-n-roll is to create myths,” said Bangs.]

The play opens with Bangs getting ready to work in his messy office/living room and then realizing he has guests. “Shit. I forgot I invited you over.” He asks us to wait while he finishes a review, but hands out a few cans of Schlitz to members of the audience. From then on, he occasionally interacts with the audience, handing us old music magazines or albums he wants to get rid of. He hands a Loggins and Messina album to a man in the front row. “Take this out of my house. Get it out of here. Don’t even say the name.”

[More at the beginning than at the end of the intermissionless show, Jensen seamlessly wove the script’s wall of words—insightful, philosophically intense dialogue drawn from Bangs’ writing—with organic audience exchanges.]

For the next 90 minutes, Bangs tells us the story of his life, how he got turned on to words reading Allen Ginsberg, Jack Kerouac and William Burroughs, how he discovered the music that changed his life, and how he began to write music reviews. Also how he began to consume pills by the handful (acid, with beer) and Romilar cough syrup by the bottle.

[Bangs’ penchant for dextroproptexphene caused his death by overdose in 1982 at age 33.]

Born and raised in and near El Cajon, California, Bangs had been freelancing reviews locally and sending reviews to Rolling Stone. They are never printed until Bangs sends a scathing review of an MC5 album, Kick Out the Jams, a week after the magazine featured the Detroit band on its cover. Rolling Stone prints the review and Bangs becomes a Rolling Stone regular until he’s fired in 1973 for “disrespecting musicians.” Bangs moves to Detroit to write for Creem. He and editor Dave Marsh coin the term “punk” to describe Detroit bands like the MC5 and Iggy and the Stooges. (Marsh also christened “heavy metal.”)

[“The true reflection of a person’s life is the music they listen to,” Bangs said.]

Bangs admits that “being a critic means wanting to inflict your taste on other people. It’s a very honest impulse. I simply want you to like the same things I like.”

Jensen/Bangs is jittery, in constant motion, roaming around the set, looking for records he wants to play (the Velvet Underground, Van Morrison and The Clash) and tossing away those he hates (the Beatles, James Taylor, Styx, Rod Stewart). The play would be less effective if set in the era of CDs or streaming music. Those 12-inch vinyl album covers are pure gold as stage props.

[Sweating in his shaggy, unkempt wig, Jensen wears self-discomfiture as Bangs likely did.]

He tells us of his excitement at moving to New York (“nothing above 14th Street”) and going to CBGB where he hears Blondie, the Ramones and the Talking Heads—where “the freaks on stage were the same as the freaks in the crowd.” A respected critic in the 1970s, he goes to London (courtesy of CBS Records) to meet this band called The Clash. Seeing them play for the first time, “the band is taut terror from the minute they hit the stage … one of those performances for which the … term ‘electrifying’ is pathetically inadequate.” He meets Mick Jones and Joe Strummer and finds the musicians to be—almost human.

[Destructive hero worship of rock’s messianic figures is a deep theme of the work, as is the lure of New York City, where the creators reside.]

Jensen is mesmerizing as Bangs and Blanks’ direction keeps the momentum going throughout the 90-minute production, which makes great use of Bangs’ rich and profane writing style. Richard Hoover’s scenic design is, shall we say, scenic? Bangs’ messy, littered space is just right for the story. And David Robbins’ sound design gets the tracks playing at the right time and level to enhance Bangs’ story.

[The vintage Smith-Corona typewriter even gets a story and a solo.]

Jensen and Blank have collaborated on plays such as the multi-award winning The Exonerated, for which they interviewed more than 40 wrongfully convicted death row inmates. It was made into a 2005 film.

Karin and Nancy will give this review four stars (out of four) because it’s a fabulous performance by Jensen and an excellent adaptation of Bangs’ opinions and writings. But we give it four stars (on theatreinchicago.com) with a caveat. If you’re not in love with ‘60s and ‘70s rock—if the thought of seeing the Velvets at CBGB doesn’t give you a chill—if you need us to explain CBGB—then you may want to skip this show. But if those things mean something to you, then get to Steppenwolf ASAP because this show only runs three weeks.

[Even if you aren’t familiar with this seminal music period—like the audience member who proclaimed his affection for New Wave—go to understand the universal precept that “a hero is a block to anything you might accomplish on your own.”]

Every evening show is followed by musical performances of some of Bangs’ favorite music by Chicago bands, with the setlists curated by Jim DeRogatis, Bangs’ biographer. On opening weekend, the performance by Bethany Thomas, frontwoman and vocalist for her Chicago powerhouse rock band, included tracks from Iggy and the Stooges, Richard Hell’s “Blank Generation,” David Bowie’s “Stay,” and “I Love a Man in Uniform” by the Gang of Four.

[Bethany Thomas and her band tear the roof off the sucker.]

How to Be a Rock Critic continues at Steppenwolf’s 1700 Theatre, 1700 N. Halsted, through July 22. Performances are Thursday-Saturday and you can buy tickets for $30. Call 312-335-1650 for info. The production is part of Steppenwolf’s Lookout series.