Merchant of Venice at Shakespeare & Company 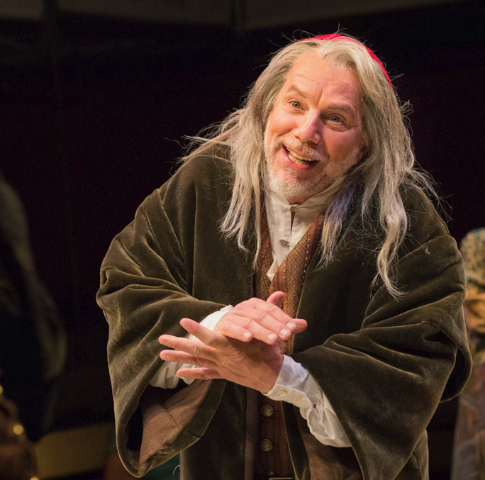 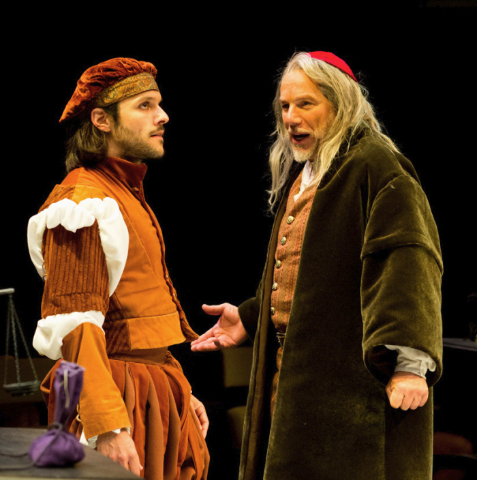 Shahar Isaac as Bassanio with Shylock. 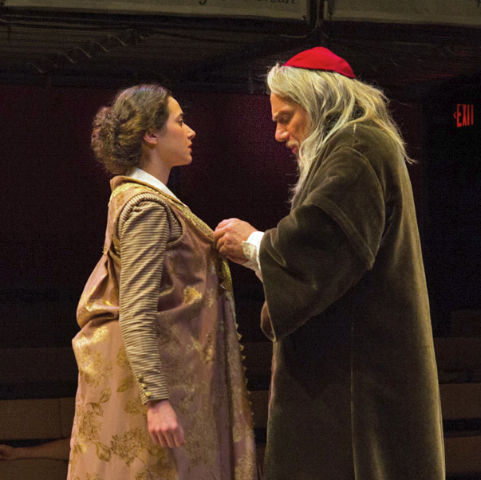 Kate Abruzzese's Jessica wants to be free of her father. 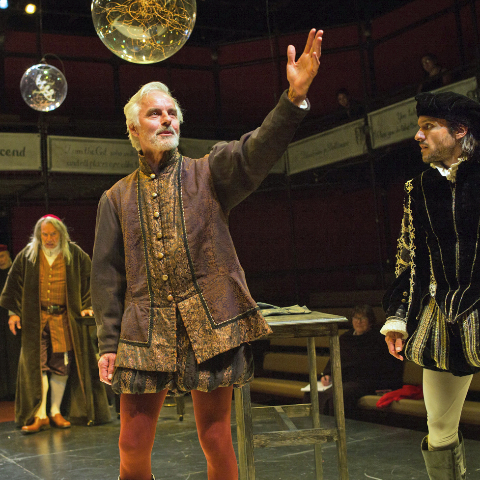 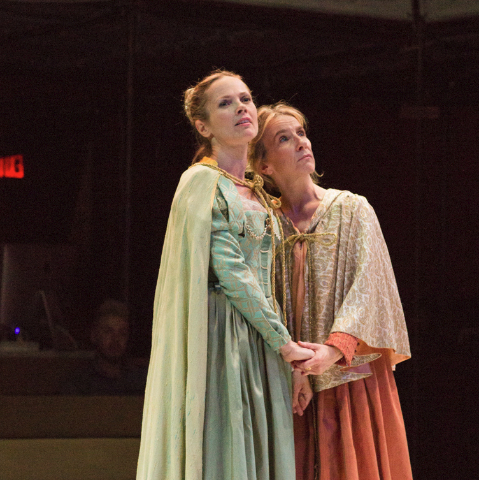 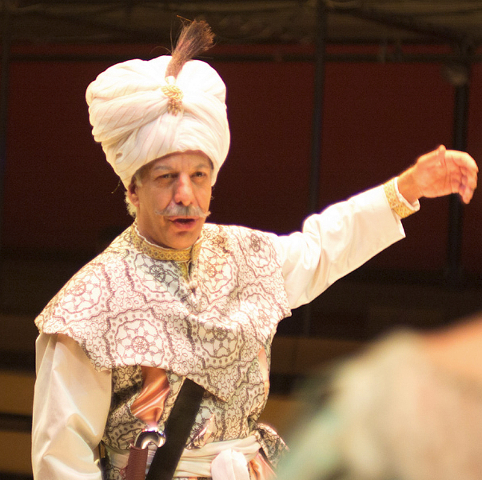 Erick Avari was foolish as the Prince of Morocco. 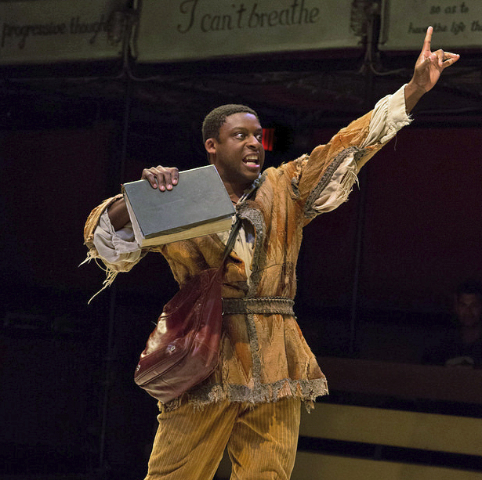 This underscores and justifies his insistence of the default of a “pound of flesh” from his adversary and tormentor Antonio. It is the relentless pursuit of justice for assaults  and insults against himself and his people that drives the money lender to the brink of disaster and even possible execution. In a reversal he is forced to convert to Christianity at the mercy of a Christian.

It is what underlies his plaintive singing of the ancient Aramaic "Kol Nidrei" which prevades the darkened playhouse at the end of the production. It conveys how Jews who were forced to convert remained Jewish. In post Franco Spain, for example, many came forth after centuries of oppression to reclaim their Judaism.

The intent of Shakespeare was to write the play as a comedy. There are comic elements but it is grim humor. This production has an uncanny relevance as America is yet again roiled by racism.

A scholar of the works of Shakespeare the director of the current production, Tina Packer, insists that she is presenting an authentic, take no prisoners, version of the play. This entailed the cooperation of the company in delving deeply into their hearts and minds to find the motivation and conflicts of the characters.

As one might expect the result is unsettling. Its perceived authenticity, and raw edge, will be up to the audience to sort as individual takeaways.

First and foremost any production of this play depends on casting a superb and galvanic Shylock. That is accomplished to a fault in a magnificent performance by the company veteran Jonathan Epstein. His command of the poetic language is fluid and as close to natural as can be expected from classical theatre.

We fall on his every phrase and the words sink deeply as he attempts to build understanding and compassion for a man who would extract a cruel penalty for a defaulted debt.

Given the melancholy apathy of his adversary Antonio, the titular Merchant of Venice, it is difficult to understand the specifics of the deep rooted hatred. As played with well defined restraint by John Hadden we fail to find anything less than admirable about the man.

Underscoring the ‘authenticity’ of Packer’s approach in the early scenes, when Bassanio (Shahar Isaac) approaches Antonio about backing a loan of some 3,000 ducats from Shylock, they are seen kissing on the mouth. This implies more than friendship.

The irony is that Bassanio needs the loan to have financial resources while seeking of the hand of the orphaned Portia (Tamara Hickey).  Pursuing the will of her father she has made finding a husband into a contest of choosing the correct of three caskets; gold, silver and lead.

The winning casket will contain her portrait. In one of the best laughs of the evening, instead of Portia, a losing contestant displays a framed image of Donald Trump.

The ‘switch hitting’ of Bassanio (given a nice turn by Isaac), and how he uses that as leverage with Antonio, is a part of the scholarly outing that permeates this production.

In British society, most vividly in the trial of Oscar Wilde, it was the norm for gay men to marry as social cover for their true sexual orientation. The women understood and respected this arrangement which allowed them social status and financial security.

By this trope is Bassanio  gay or simply manipulative in putting his ‘lover’ at risk? He is certainly lusty in his pursuit of Portia or so it seems. Since he is broke is he really just after her money?

In a complex and mult-layered role Hickey is a delicious and enchanting Portia. Her swoons over Bassanio ring true and here the comedy is richly revealed. Then we see that brilliant, calculating other side of this strong and independent woman.

Disguised as a man she is the judge in the trial brought before the Doge. She abides by the spirit and letter of the law but finds a resolutely Christian verdict.

Although the Bard never visited Venice, that most divine city a mirage floating on now sinking islands in lagoons, he was intrigued by its social, political and economic complexity.

As a maritime community its economy was based on free trade between the Christian West and Islamic East. Its thriving Jewish population was integral to banking and trade. The merchants were dependent on loans to finance their trade with risks involved. In this regard Antonio has had a run of bad luck which led to the default.

By medieval law it was a mortal sin and crime for Christians to loan money and charge interest. This was the mortal sin of usury. Given the anti Semitic laws that restricted Jews from owing land and property, it was one of the few means of making a living available to them. Others were medicine and law.

Eventually, the Christian bankers of Florence, led by the Medici family, found a loophole around usury. In the Brancacci Chapel the story of “Render unto Casear” was depicted in a fresco by Masaccio. Thereafter the florin of Florence became the gold standard of Christian Europe.

As we see in the trial before the Doge, or Duke of Venice, he must remain impartial. It is more than an issue with Shylock, but the perception of his tribe that is at stake.

Is Shylock pursing this trial and its grim consequence because of, or in spite of, being a Jew? Through the play he is never addressed as Shylock but rather as The Jew. Is he a man or a signifier? When eventually addressed as Shylock he corrects the pronunciation. There is confusion about his name and its actual meaning.

For Christian adversaries Shyock embodies all of the vile attributes of his race/religion. As reflected in the reactions and entreaties of a Jewish elder he acts as an individual without the consensus of the community. His actions will cause pain and suffering for all of the Jews of Venice.

While Venice was a Christian city, of necessity, it was known for its restive tolerance but not without cruelty and irony. The Jews were allowed to reside on the island of Ghettone but were locked in at night. From that we get the word ghetto.

As a gesture of friendship, in an attempt to resolve differences, Antonio invites Shylock to dine with him. He refuses as it would entail breaches of Talmudic law.

These are the kinds of constraints that cause his daughter Jessica (Kate Abbruzzese) to escape home. She hopes to roam freely as a Venetian which is systemically impossible.

In the pursuit of authenticity the Tina Packer Playhouse has been reconfigured in the round. Past productions have been notable for economical, bare pipe sets but now there is none at all. Kris Stone, however, is credited as set designer.

Perhaps that is based on the image of a cross laid over a Star of David on the floor with writing superimposed. At an angle around the edge this is undecipherable but visible from the balcony which was unoccupied during the first act of the Gala performance. Some of the audience moved to this better vantage point after intermission.

Another aspect of design entailed passages of text on banners around the outer edge of the balcony.

There were no sets as such during the productions of Shakespeare’s time. We have attended a play in the recreation of the Globe Theatre in London. It is what Packer aspires to but the playhouse named for her is at best a hybrid.

If theatre in the round is a now permanent configuration it entails constraints on future productions particularly of contemporary plays.

While lacking sets the production balances with sumptuous period costumes. The play begins with spectacle in an ersatz carnival introduction. There is a long raucous interval before the first spoken word of the play. It is meant as a mood enhancer evoking the exotic, multi-cultural ambiance that is unique to Venice.

This quality is further enhanced by the non traditional casting of many of the supporting roles. It verges on stereotyping with an oddly inserted African American tinge to the performance of Launcelot Gobbo (Thomas Brazzle). He is a servant of Shylock who deserts his master to work for Bassanio.

While played for laughs the performance of Erick Arvari was smarmy as the Prince of Morocco then silly and unintelligible as the Prince of Aragon. Packer failed to place restraints and definition for this over-the-top comedic excess.

At the snap of his fingers, for example, harem women fall to their knees and even prostrate themselves. It is set up that we are relieved that he does not claim Portia.  One might compare the demeanor of this absurd and dismal Moor to the protagonist of the other Venetian play Othello.

Packer sets the bar high but reaches beyond the grasp of the audience. She does indeed evoke the depth and passion of the performers. One is stunned by their commitment to her mandate. There is, however, a feeling of excess prevailing over reason and restraint.

In remarks before the play and in the program notes she wrote “The Merchant of Venice is a difficult play. It is so full of racism and sexism that it makes it hard to produce. It is written as a comedy but its themes all point to tragedy.”

Under her direction the comic scenes tend to farce while tragic ones range from pathos to bathos. It was left to the actors to find an edge and hold the line.

With admirable restraint it was deeply resonant when the defeated Shylock accepted conversion and removed his red yarmulke tossing it on the stage. This is the tragic essence and consequence of a Jew standing up to Christians.

In Spanish culture that would make him a converso as was his daughter Jessica who married a Christian. In exchanges with Portia we sense how Jessica will and will not be accepted into the mainstream of Venetian society. This is reflected in misgivings by her lover Lorenzo.

The phenomenon of assimilation  was vividly chronicled in Hannah Arendt’s “Origins of Totaletarianism.” She documented how and why the Jews of Germany were the most assimilated and prosperous in all of Europe. The consequence of this led to the Holocaust.

In Merchant of Venice, for all of his insight, arguably, Shakespeare was out of his depth. That’s why productions of this play often founder in the lagoon. It also represents the challenge of why this play is repeatedly revisited and reinterpreted.

Packer has given us pause to rethink this compelling and confounding masterpiece of theatre.