My Dad's Nickname Was 'Cab Franc' 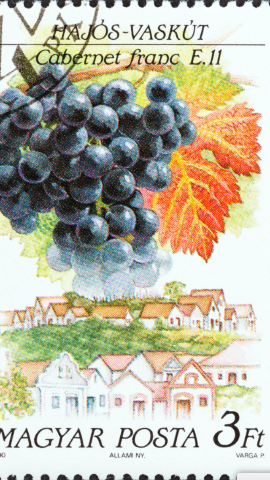 "How Hungarian Cabernet Franc Changed My Dad's Life and Mine"

My Dad was known to his friends as ‘Cab Franc.’

His name was really Joseph and all of his social time with visiting friends was spent talking about his favorite wine and grape from Hungary, Cabernet Franc.

My mother’s side of the family is Hungarian, her sister was born near Villany. Her mother’s last name was Grosz and her father’s given name was Erdelyi. That was the Hungarian connection.

Whenever he went to Hungary for business, he took two extra, empty suitcases, filling them up, upon return, with bottles of Cabernet Franc.

When my parents had their bi-monthly parties at our house in New Orleans, in the 70’s and 80’s, wine spritzers were popular. A wine spritzer is made from equal parts of chilled wine mixed with either club soda or ginger ale.

Eventually, the guests said, forget the club soda and ginger ale and pour the wine Cab Franc only.

That is when they started calling my father, ‘Cab Franc’, instead of Joseph.

I remember dad telling stories to our relatives, Raymond and Roger Weill, who were among America's foremost stamp collectors. They were both wine connoisseurs, especially high end Burgundies and Bordeaux’s. When the Weill brothers came to our house for a Sunday meal (my mom was their favorite cook), they would bring a case of Hungarian Cabernet Franc for my father, as a gift.  They knew my dad’s supply of Cabernet Franc from Hungary frequently ran out.

In fact, my father said to the staff at Martins Wine Cellar, if you can’t educate your customers on how great this grape from Hungry is, I would be happy to buy all of the bottles you can’t sell.

My father was a man of his word.

As the years went by, my interest in wine grew.

I married, living in Nuremberg, Germany, teaching journalism, photography and movie-making at Nuremberg American High School. We owned a Volkswagen camper and had three months every summer to travel. This was in the 90’s.

My summer goal was to camp in Hungary to visit Villany and learn about my father's favorite grape, Cabernet Franc.

My dad passed away in 1989, so it was my duty to visit Villany and learn first hand about Cabernet Franc for both ‘Cab Franc’ and my mother's Hungarian roots.

The visit was a success.

I learned that Cabernet Franc was a relatively new variety in Hungary, having been planted in the early 1900s. It took until the 60’s before the variety began to thrive in Hungary, specifically, Villany. Cab Franc was used mostly in the 90’s in Bordeaux blends. The winemakers realized that in their land of rolling hills and valleys that Villany should be the home of Cabernet Franc. Siklos, to the west of Villany, has cooler limestone hills, producing Cab Franc with more acidity and ripe for blending with Villany’s grapes.

Villany has a Mediterranean climate, with long, hot summers and mild winters. Cabernet Franc is planted everywhere in the region. The end result encompasses a fruit forward wine that is balanced, velvety and has old word earthiness. It’s a clean wine that rolls off your palate and continues to grow and takes minutes to end, due to its long finish.

Cabernet Franc is a fascinating grape.

Historically, I was taught, it’s the father of both Malbec and Cabernet Sauvignon. If that is the case, its juiciness, spice and even structure make this variety a superstar. With high alcoholic content (15% is normal), the tannins do exist in younger vintages, but disappear with aging, turning this wine into an elegant, fruit driven, fresh wine, worthy of international acclaim.

If it weren’t for my father's passion about Cabernet Franc, chances are I would never have entered the wine world. Like my Dad, my goal is to alert the world that Hungarian Cabernet Franc is a ‘World Class’ wine.