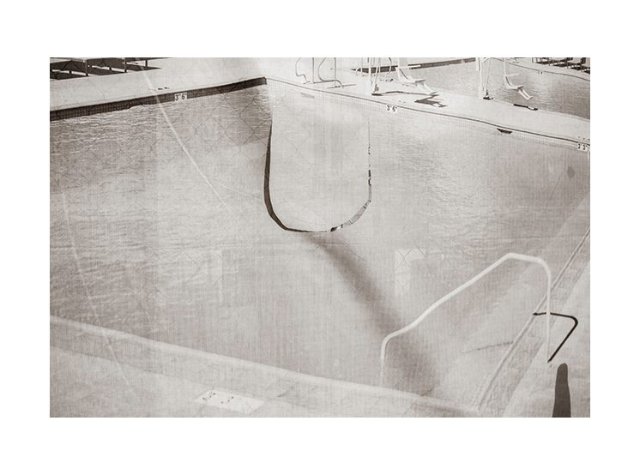 There is an old Maine locution “You can’t get there from here” that is a response to a question from a lost driver getting directions in the Maine backcountry. Factually it states the obvious: it might be hard to describe the way places are connected by convoluted country roads but it also embodies a kind of laconic Yankee spirit that raises the question of why would one bother to go elsewhere when here might be just fine. Joseph Podlesnik adds to this dialogue: once you get there leaves us in a quandary: There may not be a here at all.

In photography and painting perspective has often been the main visual tool that connects the human presence to the here and now which becomes place. The image created by the handheld camera establishes ipso facto a tight bond via the picture plane on the back of the camera to the environment. If it is parallel to the subject matter or at an angle to it, the way the eye is moved by the image can be quite different. In an 8x10 format you can actually manipulate the plane in the back of the camera to be in alignment or not with the subject matter. As a young artist in the 70’s when flatness reigned in the world of Painting I took pleasure in looking at the snap shots of photographers who documented their presence in the world. It was a humanist bent that led me to appreciate the work of Cartier-Bresson. He is a master of the manipulation of perspective as a tool to both submit his subjects to perspective and then liberate them from its hold at the last minute so to speak. The perspectival effect was either achieved through the converging lines of architecture receding or with similar objects each being smaller in scale. In this photo he used both:

The perspective is created both by the receding barrier and the scale of the two men in proportion to each other. One wonders how different the image would be if the man closeup would be looking through a hole at what I presume to be a construction site. The side of his face is parallel to the picture plane of the camera putting him in the photos structure, but his looking away is an escape from the structure of the perspective to something outside the snapshot.

Eggleston is another photographer hypersensitive to the picture plane. Whereas Cartier-Bresson is using the diagonals Eggleston often uses the parallel picture plane as an inert underlying structure on which to hang some other visual strategies. In this picture the trash cans hang like two barbells supported by the food stand. It is a closed system except for the soft candy hues of the stand and their evocation of a warm summer day which like the gaze of the man in the Cartier-Bresson photo is an emotional release.

Podlesnik compresses the space with the same perspectival tools but squeezes the human presence almost completely out of the scene for the most part with no escape, no hope for empathy for the human condition. The suburban/urban space he describes seems drawn from the non-spaces of industrial parks, parking garages, motels off of the highway. But the nihilist aesthetic is so powerful they could just as well be anywhere in the hands of Podlesnik. Cartier-Bresson and Eggleston started us down the route away from the monument, the easily recognizable. Poldesnik takes us ever further afar to the edge of the void with the places almost unrecognizable. But there is a surprisingly unexpected release in all his images but not in the subject matter of the photo: the things he describes are often represented with the marks ,structure and textures of abstract painting. Sometimes we see the influence of minimalism at other times that of postmodern provisionalist painting as defined by Raphael Rubinstein a style of painting shown several years ago in a show at MoMA entitled “Forever Now”.

Can’t get there from here? Just at the moment where Podlesnik seems to abandon the here and now and “the place” seems to be lost in an existential dead end, the viewer is transported by a kind of transcendence into the language of painting. It might be considered in computer parlance as hypertextual the simultaneity provided by the computer in our modern life where one image suggests another.