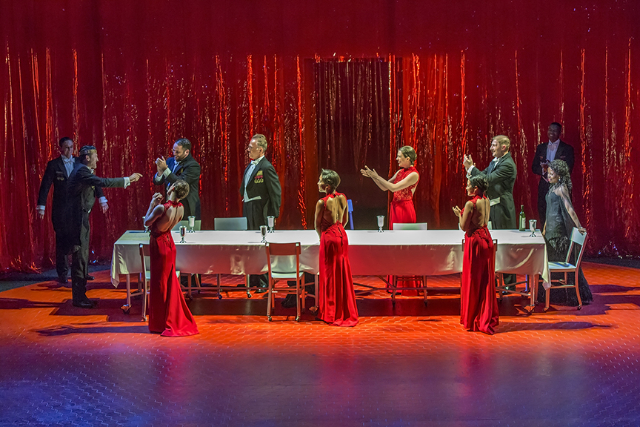 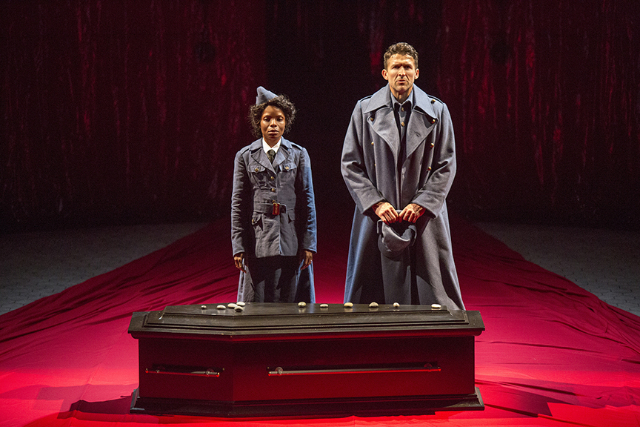 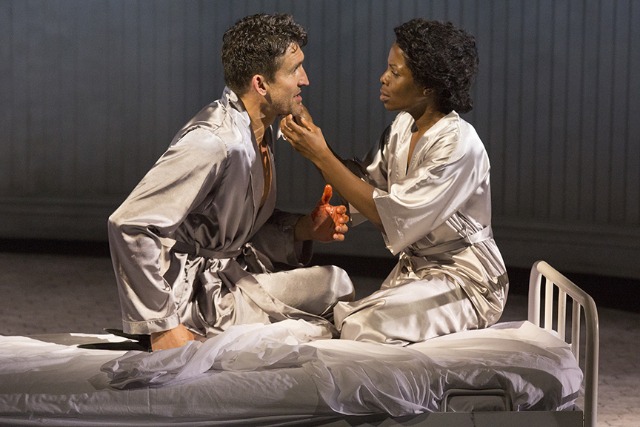 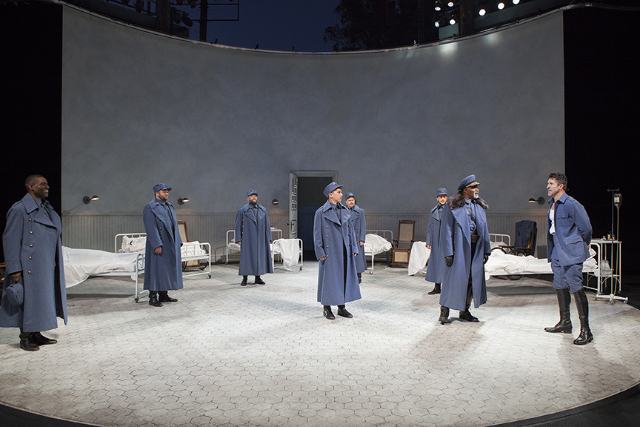 It’s been said that there are only 36 plotlines for even the most brilliant and inspired playwrights to render. The progenitor and genius for English speakers in this regard is Shakespeare.  The master of plot, the conductor and orchestrator of emotions, the person most responsible for inspiring playwrights over the last 400 years.

There are four great tragedies from the pen of Shakespeare that are considered the bedrock of English literature: ‘Hamlet’, ‘King Lear’, “Othello’ and ‘Macbeth’.  All deal with flawed individuals who fall victim to their own ambitions and search for power in all its forms.

San Diego’s venerable Old Globe theatre complex (three venues), launched the 2016 Summer Shakespeare Season in the Lowell Davies Outdoor Festival Theatre with a stunning and powerful portrayal of ‘Macbeth’ by acclaimed Royal Shakespeare Company (RSC) actor Jonathan Cake in the title role. The production also stars Marsha Stephanie Blake as Lady Macbeth. Despite her petite stature this Lady Macbeth is a formidable schemer and partner in crime with her husband as both are driven by the intoxicating and lethal cocktail of ambition and power during the age of the Divine Right of Kings.

Hollywood over the years has glamorized the Middle Age period in history; taking a lot of dramatic license in the process.  In reality life was a harsh existence with a life expectancy of between thirty and fifty years of age. The driven and ambitious had to make their marks early to succeed.  Remember, Alexander the Great was just twenty-one when he sat down and wept because there were no more countries to conquer.

‘Macbeth’, in short, is a story of ambition on steroids, by a man who believes through prophecy, that he is destined to become the King of Scotland. To ensure that the prophecy becomes a reality, Macbeth together with his wife, hatch a plan that includes deceit, betrayal, and murder as a way of obtaining the ultimate adrenaline rush and power trip – becoming the King and Queen of Scotland.

Under the deft direction of Brian Kulick, this ‘Macbeth’ production has been updated to a visual setting more or less around the time of World War I.  However, the language, spirit, and the murderous intrigues that Shakespeare loved so dearly are still present.  It’s a clever way to update the core story that is familiar to all without sacrificing any dramatic elements or story points as conceived by the Bard.

It’s a splendid ensemble cast that generates enough energy and on-stage chemistry to light half of San Diego. The potent performance of Ms. Blake and the towering performance of Mr. Cake is just the icing on this blood-soaked Scottish pastry that makes this dark and villainous tale so compelling.  And just as in Emile Zola’s ‘Therese Raquin’, the lovers are haunted by visions of their dead victims that prevent them from enjoying the fruits of their crimes.

Costume Designer Oana Botze creates beautiful costumes for Lady Macbeth, Lady Macduff, and the other women, however I was struck by the blandness of the male military costumes created by a lot of designers of late.  They all appear to resemble the dark gray look of WW II German soldiers, and I’m perplexed as to why the style appears to be the standard for new designers.  All that is, except for that magnificent Field Marshall coat draping the shoulders of Jerome Preston Bates as King Duncan.  That costume had better be under lock and key every night. It’s a beauty.

‘Macbeth’ is one of Shakespeare’s masterpiece plays that is not mounted very often.  It would a pity to miss it.  This splendid production is performing in the Lowell Davies Outdoor Festival Theatre and runs through July 24, 2016.