Dreaming in Cuban by Cristina Garcia

World Premiere by by Central Works 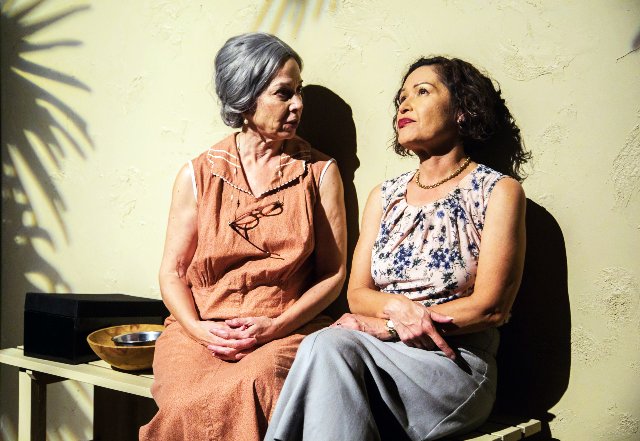 Although the ostensible theme of “Dreaming in Cuban” receives a fairly direct reference in the play, the title relates to how nightdreams, daydreams, and memories, even those of half-truth and fabrication, inform our character and how we lead our lives.  But this is far more than a dreamscape.  Cristina Garcia, who has adapted her 1992 National Book Award finalist novel into a world-premiere play, delves into a number of stock motifs and stock character types, but in a vivid, imaginative, and entertaining way.  The story, which takes place in Havana and Brooklyn in 1979-1980, reveals a family with four determined women of Cuban ancestry; representing three generations; living in two countries; and sharing one common condition – zero male partners impede their personal pursuits at this point in their lives.

The plot centers on the widow Celia, the abuela, or grandmother.  A civil law judge in Cuba, she remains wed to the revolution and all it represents. Her ardor for Castro’s communism may have been a compensation device for her loveless marriage to Jorge, who even had Celia institutionalized for a time in hopes of eradicating her lingering affection for a past lover.  Though Jorge has passed, his spirit often appears as a vision to Celia and her two daughters, adding an element of mysticism that is accentuated by the spare staging and Director Gary Graves’ fine use of accent lighting.

Celia’s rigid adherence to political principal at the expense of family is matched by daughter Lourdes, who escaped to the U.S. shortly after Castro’s ascent.  Goal oriented and severe, she owns a successful bakery in Brooklyn.  Aptly named Yankee Doodle, it reflects Lourdes’ super-American values with a near pathological disdain for communism that is often associated with Cuban emigrees.  When she finally meets her mother face-to-face for the first time in two decades, the political divide is palpable as both see every human transaction through the lens of politics.  The interaction is more like two welterweight boxers feeling each other out and then releasing flurries of punches, rather than the loving reunion of mother and daughter.

Lourdes’ daughter Pilar was two years old when her mother took her from Cuba.  (Note that this fact and more map onto the playwright’s own personal history.)  Consistent with the theme of one generation rejecting the values of the preceding one, Pilar romanticizes Cuba and yearns to visit her abuela, whom she feels will provide the love that she misses from her mother.  Like many teens, however, she fails to appreciate that Lourdes has stepped up for her in important situations.  And like many who claim memories of earliest childhood, Pilar holds to beliefs that really represent images of desire rather than realities.

Celia’s other daughter, Felicia, missed escaping to the U.S., but like Lourdes, she rejects the Cuban political system. Having suffered traumas, she is emotionally fragile.  But Celia considers Felicia a non-conformist, and despite the mother having suffered incarceration herself, she visits a similar punishment upon her daughter.  Putting love of country and its political system before love of family, Celia has Felicia committed to an indoctrination camp in hopes of changing her political philosophy.

The cast is led by Mary Ann Rodgers as Celia, who captures not only the abuela’s dogmatism, but also her wistfulness and loneliness as she revisits unsent letters to her Spanish lover from before her marriage.  Anna Marie Luera ably conveys the often deficient humanity of the fiery Lourdes as she pursues objectives with little regard for unintended consequences.

A lively dynamic occurs as the action shifts back and forth between the U.S. and Cuba, yet there are occasional lapses in narrative pacing as well as acting and timing of interaction.  But there are also several significant events and clashes among characters that bristle with dynamic tension.  The plethora of themes that are explored, particularly concerning the various conflicts of values, yields a provocative theatrical piece that is nicely rendered with great sensitivity.