Last of the Red Hot Lovers Sizzles at WTF 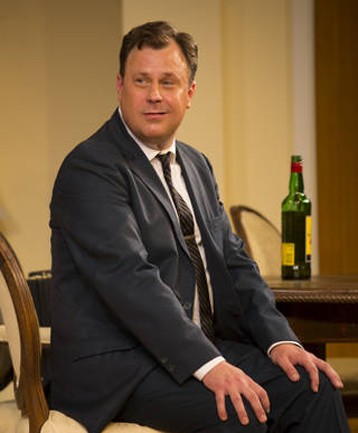 Barney (Brooks Ashmanskas) strives to screw himself out of a midlife crisis in his Mom’s apartment. WTF photos/. 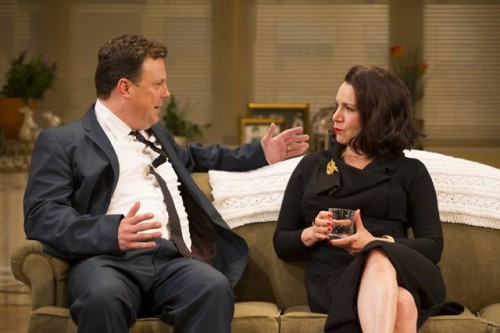 Round one Elaine (Susie Essman) 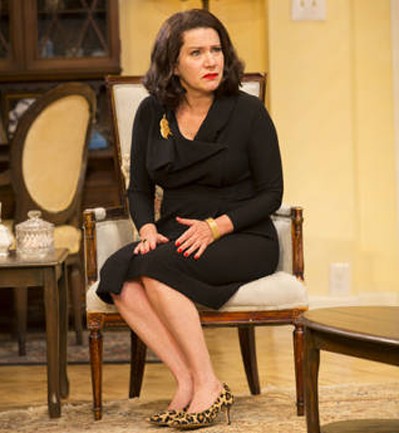 Essman is best known for her foul mouthed role as Jeff’s wife in the Larry David Show on HBO. 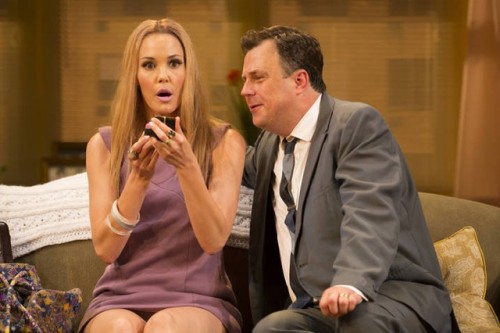 Barney is out of his league with Bobbi (Leslie Bibb).

Bibb has legs that don’t quit. 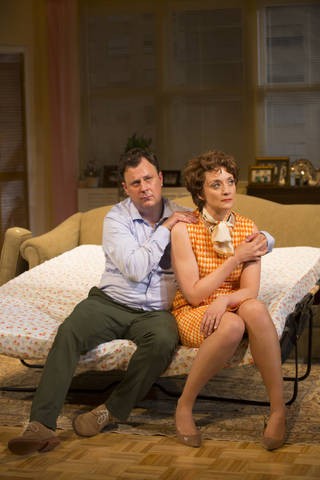 Three strikes and you’re out with Jeanette (Heidi Schreck). 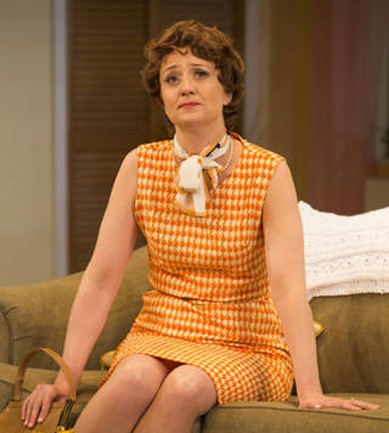 In a brilliant romp, a Williamstown Theatre Festival favorite son, Brooks Ashmanskas, has returned in a rare WTF production of a Neil Simon comedy, Last of the Red Hot Lovers, from the peak of the sexual revolution in 1969.

This is also the 8th season for Jessica Stone at WTF and her second time as a director. She made her directorial debut in 2010 with a smash hit of the Steven Sondheim musical A Funny Thing Happened on the Way to the Forum with the twist of an all male cast.

In February of 2011 Stone directed a staged reading of the Simon play at the Clark Art Institute. Of the actors in that reading Ashmanskas appears in the current production.

There were hints of the potential of the comedy that now have been fully realized in a superb production in the intimate, 173 seat Nikos Stage.

Barely indicated during the reading is what Ashmanskas injects into a performance that is not in the script.

Last night, for example, we were in stitches before he uttered hardly a word.

Barney Cashman, a schlemiel, nebbish, schlub, take your pick of the most apt Yiddish sobriquet, is a nobody who runs as seafood restaurant in Sheepshead Bay, Brooklyn. From handling fish and opening shellfish all day his hands smell. That proves to be a running gag as he attempts to seduce three quite different women in his mother’s apartment.

During that first scene, repeated three times, he enters softly calling her name and hoping that she doesn’t answer. Once a week, from three to five, she does charity work. It is a narrow window of opportunity for him, after 23 years of faithful marriage to Thelma, to latch on to the sexual revolution.

He married his high school sweetheart. Other than Thelma the only other woman he has known was a middle aged hooker in New Jersey while a teenager. Apparently, he threw up all night after a fifteen minute interlude.

Now he wants to give it another shot.

It is winter during his first catastrophic interlude with Elaine (Susie Essman) a customer to whom he slipped an extra shrimp cocktail and a note with the time and place of their rendevous. He is pleased but surprised when she shows up.

The setup is that Mom must never know of his attempts to make the two backed monster on the living room’s pull out couch in a studio apartment.

With the remarkable physical comedy that Ashmanskas is known for, nervously, sweating last night, he creeps around the apartment setting up for the tryst. Carefully he removes wet rubbers. Passing a mirror he jerks back for a look. Flips his hair a bit. Then from a brief case produces items essential to the seduction; a bottle of J&B scotch, two glasses from Bloomingdales (too risky to use Mom’s), mouth wash, aftershave and some perfume for those smelly fingers. Which to the delight of the audience he keeps sniffing.

Even before the tough, middle aged broad, Elaine arrives we are on the floor laughing.

If anything the pace of the comedy slows down as we delve into exposition. This is all quite new to Barney but not for Elaine who wonders when he will stop talking and make a move. Through endless drinks he wants to get to know her as a person before hopping in the sack with a perfect stranger. Barney, a rookie at all this, is hung up on romance.

Initially, it was hard to hear Ashmanskas. I thought he was out of voice or had a cold. Actually, he is keeping his voice down as not to arouse the interest of neighbors who would of course tip off Mom.

The notion of an average guy, in this case a fishmonger from Brooklyn, what an image, jumping into the sexual revolution is very much of the period. He is the surrogate of the everyman locked into a dull marriage while the rest of America is on the pill and humping their brains out.

The Simon classic, which stands up quite well in a very different era, reminded me of The Seven Year Itch in which another boring married guy, Tom Ewell, interacts with his neighbor, Marilyn Monroe, while the family is enjoying summer vacation in the country. The 1955 film by Billy Wilder focused on the same middle class, mid life, male angst that Simon explored a decade plus later.

Informed that there is just a two hour window to get it on, Elaine, who is out front about enjoying sex, is increasingly annoyed as precious minutes slip by with his endless prattle. Plus, she really needs a cigarette. She asks if it will be ok to knock on a neighbor’s door and ask for one. Not exactly.

The scene ends with Elaine realizing that the next time in Barney’s restaurant she won’t get the extra shrimp cocktail.

Between acts Stone has interjected an interesting device. Venetian blinds come down while scene changes occur. Onto the latticed background are projections (by Aaron Rhyne) of period film and musical scores setting a mottled mood of the period. It is a signifier of the street noise below Mom’s high rise, rent controlled, Manhattan apartment.

The device makes us more aware of the enervating, Momish apartment designed with great attention to detail by the renowned  Alexander Dodge. There are all the right accents so generic that they barely attract our attention. Like the soft, yellowish color of the walls. This picks up the hideous green refrigerator in the kitchen which we barely glimpse. The center of the room is dominated by a non-descript pullout couch. Off to the side is a studio piano which nobody plays but serves to display family photos.

As a cover story Barney calls the restaurant and explains that he is Christmas shopping at Bloomingdales, or at the dentist. The premise of Simon’s play is to replicate yet change the circumstances of his colossal failures as a philanderer. The comedic core is how the three encounters differ all with the same result.

There is an interesting evolution as Barney becomes more proficient with each progressive attempt at adultery. He is learning the ropes. For the second woman, in addition to scotch, he has added gin. And cigarettes. Lots of cigarettes. By the third encounter champagne.

While Barney is awkwardly getting the hang of the game each of three women present dauntingly different challenges. In an aside that brings the house down, with exasperation, he exclaims “I sure can pick em.” Yes Barney, that’s your first mistake.

Bobbi (Leslie Bibb) who bounds about dominating the high energy second act is way out of his league. It’s a quixotic impossible dream like Tom Ewell making it with Marilyn Monroe. Bobbi is over the top, eye candy but, as we learn, total gonzo, delusional, suicidal and as explosive as a hand grenade.

Bibb so completely takes charge with an energized, brilliant, witty performance that even the scenery chewing  Ashmanskas is huffing and puffing to keep up. We never quite understand how he has managed to lure her to this den of iniquity. There is something about a meeting in the park when he loaned her $20 for an accompanist to an audition. The part went to a black girl, as usual, she states. She wants to repay the money but doesn’t have a cent. There is an innuendo that she may be having a lesbian affair with her roommate, a neo-Nazi voice trainer. That and other plot twists make for a dizzy and hilarious blur.

Looking out the window she is convinced that the man standing across the street is stalking her. Taking a look Barney explains “That’s the doorman.”

She needs a smoke to calm her nerves. Barney offers his stash of cigarettes. But she has her own. Pot. Prescribed for medicinal purposes but he can join her and get high if he likes. In fact she insists. With suitably comic results.

The second act reaches such an intensity that the arrival of the subdued, anxious, and guilt ridden Jeanette (Heidi Schreck), his wife Thelma’s best friend, triggers an emotional down shift. By now Barney is mastering the game but boffing Jeanette requires more skills than the arrows in his cupid’s quiver. She is a wreck more in need of TLC and therapy than a roll in the hay. She hasn’t had sex with her husband, having an affair, in eight months. Although he has had sex with her. It’s complicated.

Also, she makes clear, he is not physically attractive to her. Too obese. Indeed Ashmanskas does have a paunch which he attempts to minimize by buttoning up his jacket.

The costume designs by Clint Ramos are key to differentiating the period and differences between the three women. Elaine is attired in generic, unflattering black. Initially, Barney is dressed in the blue business suit that his father trained him to wear. Doesn’t he have a sport coat? By act three (summer) he does. For Bobbi, Ramos had fun outfitting her in a mini skirted jumper. It set off legs that just went on forever. The riot of orange plaid and a pillbox hat for Jeanette is the kind of outfit that Peggy Olsen of Madmen would wear.

Interesting. Madmen. There’s another sixties reference and signifier of a return to interest in that chaotic period. Similarly, Simon’s play and Madmen are oriented to the middle class with only suggestions of the war, drugs, sex and rock ‘n’ roll that dominated the era of love, peace and happiness. There is an odd incident in Madmen when Don is back stage, a total misfit, at a Stones concert. And another of Sterling dropping acid at a party.

Wilder, Simon and Madmen present oblique views of the Woodstock era when I came of age. In 1969, I assure you, I wasn’t attempting to seduce women in Mom’s midtown studio apartment. More like back stage passes at a Stones concert.

No matter. We needn’t let history and sociology obscure our appreciation of a terrifically amusing evening of sublime theatre.

Yet again we are astonished by the invention range, brilliance and over the top hilarity of Ashmanskas. Consider the emotional range of whispering  to Elaine in act one, purring with the sex kitten Bobbi in act two, to screaming at Jeanette in act three. The performance, while not for every taste, left me emotionally exhausted. And totally satisfied with his trio of superb ladies.

Now with two great productions under her belt we are hungry to see more of the direction of Jessica Stone. She milked Simon for all his worth. What a hoot.