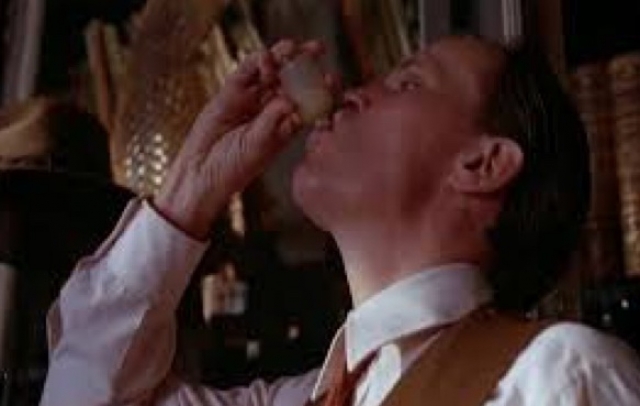 Naked Lunch with live music by Coleman, Coltrane and Threadgill with Ensemble SIgnal.
Ornette Coleman carved his own path as a composer. As he burst upon the scene, he epitomized the atonal explorations of free jazz and then developing his own musical system of “harmolodics” to express himself with saxophone and pen. On Tuesday night, the Lincoln Center Festival kicked off its week-long Coleman tribute with a screening of Naked Lunch, the surreal, disturbing and very funny David Cronenberg film for which Coleman supplied part of the soundtrack.
Naked Lunch was an attempt to film the “unfilmable” 1959 novel by William S. Burroughs of the same title, Although the book is really a series of loosely connected impressions and episodes, the screenplay stitches these elements together neatly, using quotes and episodes of the book to keep its disquieting flavor. The “needle” is a Burroughs-like protagonist named William Lee (Peter Weller) who starts the movie as a drug-using New York exterminator but becomes a writer. He does this on a series of typewriters that have transformed into talking insects. On these, mysterious creatures (”Mugwumps”) force him to write reports of his strange adventures as a “secret agent” for the perusal of “Central Control.” (These reports, in the film become the Burroughs novel.) And then some more weird stuff happens.
The plot (such as it is) kicks into motion in 1953. Lee kills bugs for a living but he and his wife Joan (Judy Davis) spend most of their time getting high off his supply of yellow “bug powder.” Attempting to kick his habit, he is introduced to “black meat”, a fine powder made from centipedes (yum!). Then, tripping from the second drug, he accidentally kills Joan and escapes to “Interzone”, an international community in Northern Africa where he has more adventures, meets Joan’s doppelgänger, takes. Lots of drugs, confronts a dominatrix and writes a novel. In the last act, he kills Joan again, reflecting the cyclical nature of the story and the fact that in reality, Burroughs accidentally shot and killed his wife in a drunken game of “William Tell.”
Cronenberg, the fiercely independent Canadian auteur, first became famous for his early gross-out horror flicks (Scanners, Videodrome) as well as moody crime thrillers A History of Vionence, Eastern Promises.) This film falls somewhere in between. The insect animatronics are nasty, proudly analogue puppets. The Cronenbergian fascination of flesh meeting technology is explored full-bore here.Wings and fly mandibles combine with human orifices in the kind of body horror that the filmmaker last depicted in The Fly. Typewriters undergo wild, fleshy evolution into organic forms. One grows genitalia and sexually molests Weller and his co-star Judy Davis before hurling itself off a balcony and smashing itself into ribbon, keys and carriage return on the pavement.
Over all this is the score, moody tectonic slabs of orchestration from the pen of Canadian composer Howard Shore. These are a blank palimpsest for the stylus of  Ornette’s saxophone runs, which express the anguish of the characters, the chaos of the situation, or at times, the liberating, illusory joys of Bill’s drug-addled existence. These were played by a crack four-piece combo located stage right: Henry Threadgill on alto and flute, Ravi Coltrane on tenor sax (his father John’s instrument), Coleman student Charnett Moffett on bass and the composer’s son Denardo Coleman on drums.
Each player had his own role. Threadgill spoke with Ornette's  voice, a wail of agony or a jagged, sharp knife of sound  that tore through the luxe musical fabric. Coltrane took the sideman role (something his father did for years with Miles Davis) referencing the latter’s modal approach In some passages but occasionally unleashing sheets of sound. Moffett switched between bow and pizzicato, creating a restless, propulsive bass line that occasionally soared in atmospheric lyrical flight. Denardo Coleman was everywhere at once, playing rolls, fills and splashes across snare, cymbals and low tom, a blizzard of percussion that echoed the stormier moments on film.
The art of playing concerts to films is not recent but it has gained in popularity of late. Lincoln Center Festival must be credited for choosing this combination of artists and cinema. Naked Lunch is never going to be a mainstream film, but the opportunity to peer into the twisty subconscious of the creative mind and the keen brilliance of a jazzman the caliber of Ornette Coleman was a perfect coming together of two seemingly opposed forces. And no Interzone insectoid typewriter would argue with that.  (Reprinted by permission from Superconductor.com)
Back to Front Page Section Home