Anne-Sophie Mutter in All Mozart Program 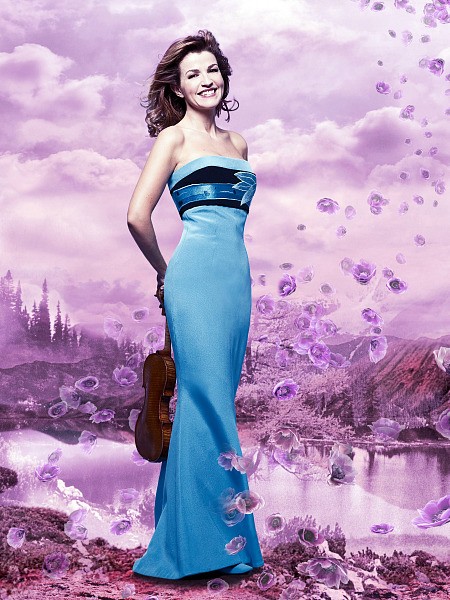 Anne-Sophie Mutter led the BSO in an all Mozart program at Tanglewood.

It has been a busy week for the stunning, German born, 49-year-old violin virtuoso, Anne-Sophie Mutter, making her first visit to Tanglewood since 1992.

For a number of years she took summers off from touring to be with her children by the late Detlef Wuderlich, Arabella, 21 and Richard, 18.

On Wednesday she performed in Ozawa Hall accompanied by pianist Lambert Orkis. On Friday she led a baroque orchestra in an all Mozart program. Tonight she will be a guest among many participating in the Gala 75th Anniversary concert. She has also met with students in the Tanglewood summer program.

Poured into one of her signature, blue/ turquoise, strapless gowns Mutter looked anything but matronly last night. It was a sultry and drippingly humid evening. Decorously, she wiped her neck, chin and shoulders with a white cloth which also served to cushion the instrument while performing.

All of that oppressive humidity must have made the execution of her playing a bit more challenging. Significantly, she never lost her cool composure. Now and then she gave a quick twist on the end of her bow to adjust the tension. It was an indicator of the precision that she brings to her performance which was richly modulated with astonishing technical prowess and a gut wrenching range of emotional evocations.

There were many signifiers that the audience was treated to a rare performance by one of the greatest artists of her generation. And surely none more gracious and beautiful.

Much has been made of the notion that she is now “conducting” as well as playing. It was intriguing to experience first hand precisely what that entails. It was in fact the norm for the period of music she performed. Because of its complexities she will not conduct works after the baroque.

If she conducted the well rehearsed group of superb musicians it was indeed subtle. Now and then she would set the tempo or briefly guide the musicians through ensemble passages. More often there was just a nod to the first chair. A couple of times she leaned over with whispered instructions.

Shall we say she had a light touch which emphasized soft, rich, solo passages which stood out like stunning jewels in a crown of glorious music.

She will return tonight for the 75th celebration. What follows is the BSO press release.

Luminaries of the classical music world and beyond—including Yo-Yo Ma, James Taylor, John Williams, Keith Lockhart, Emanuel Ax, Anne-Sophie Mutter, Peter Serkin, Andris Nelsons, and David Zinman—will gather to celebrate Tanglewood’s 75th anniversary season with a gala program that will also spotlight the festivals’ three major orchestral forces—the Boston Symphony, Boston Pops, and the Tanglewood Music Center orchestras, as well as the Tanglewood Festival Chorus. The program will open with works by two artists closely associated with the festival during its early history;  Aaron Copland’s Fanfare for the Common Man, followed by Three Dance Episodes from Leonard Bernstein’s  On the Town.  The Tanglewood 75th Celebration Gala Concert, which brings together some of the festival’s most distinguished and longtime guest artists and patrons, will also feature works by Haydn, Tchaikovsky, and Ravel, and performances by vocal fellows of the Tanglewood Music Center, the BSO’s prestigious summer music academy. A full program listing appears at the end of this document.

A highlight of the gala evening will be the presentation by John Williams of the first-ever Tanglewood Medal to Seiji Ozawa in absentia;  Yo-Yo Ma will read a response from Mr. Ozawa from the stage at approximately 10:30 p.m.  In addition to his myriad contributions to the BSO’s performance, touring, and recording activities during his 29-year tenure as BSO music director, Seiji Ozawa has also played a major role in nurturing Tanglewood’s artistic life and expanding its profile as an international festival of the first rank.

Program for the Gala 75th Concert