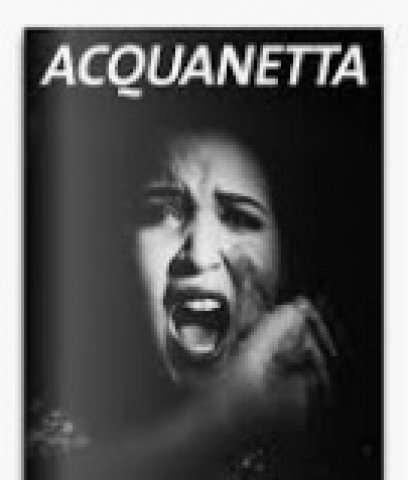 Acquanetta, the video opera by Michael Gordon, a multi-dimensional composer on the contemporary scene, was premiered as grand opera in Aachen, Germany in 2006.  Beth Morrison Productions commissioned a chamber form which is currently mounted at Bard SummerScape.

Grand or not grand, the sound in this version, sung with members of the Bang on the Can Ensemble, is big.  Loud was the word used in warning.  The nature of the production, details of which remain closely held, enables the electronic bass and also the string instruments to resound throughout the hall.  The music makes the show, as it should in opera.

Gordon is considered an eclectic composer, but this work, like many other compositions, has a distinctive texture which distinguishes the composer.  Mixing memory of capture, the desire elicited by female beauty, an eerie, noir sensibility is created. Gordon combines his steady bass beat, his repetitions and truncated scales moving up and down, to suggest subtle mystery and brass animal impulses. The ensemble instruments are amplified.  So too, the chorus from The Choir of Trinity Church and the five principal leads.

While the images before us on the screen are often explicit, they are also assembled as details. The only full portrait is that of Aquanetta, the film actress who briefly rose to stardom in movies like Jungle Woman, and the film referenced here, Captive Wild Woman. Sung and acted beautifully on screen by Rebecca L. Hargrove, she deserved her title, "Venezuelan Volcano."

Harsh, arresting sounds fill the hall as the black screen fills the stage flecked with an almost imperceptible oval.  The footage here is scratched and flickers like a old piece of film.  In time, the oval becomes an eye.  The eye becomes clearly human. An eyebrow lifts to the beat of the music.  Eye lashes dance.  Hargrove then appears to us as a gorgeous woman created by a mad doctor from an ape.

Connections are not made.  We are introduced to the ape (Eliza Bagg), and the brainy woman (Amelia Watkins), who is dressed like a cross between Nurse Ratched and Marilyn Monroe. Timur, the feisty, creepy tenor, sings the inventive doctor boldly. We are not sure if the ape's animal instincts rise up. Yet all get bloodied in the process.  Or if all get bloodied in the process of the surgery.  What is happening escalates in intensity, but not in clarity.  This is a work that at best washes over you.  It is an impression of what it was like to be a B movie star, whose own identity made clarity undesirable.

The production is live, but like all works presented on a screen in a theater, the machinations of producing are hidden, until a surprise at the very end.  We see that this has been one long, frightening and intriguing take, of a camera circling the choir and the five principal characters.

The rich overlays of texture in the music keep us in their thrall throughout.  If we are mesmerized by the screen action, the music keeps us very conscious of our own reactions, which range from thrill to terror, Grade B style.  Nothing is Grade B about the terrific score. Acquanetta is a surprising and delightful video opera.