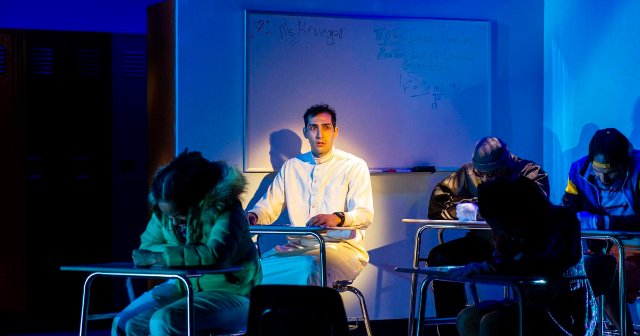 Barrington Stage Company in its tradition of encouraging new voices is providing playwright May Treuhaft-Ali with her first professional production. She has created a topical work based on ripped from the headlines reporting on the crisis in American public education.

In the early going of the one act, 94 minutes evening, it relates more as an op ed piece but eventually evolves into a drama. This is largely due to the performances of some but not all of the characters.

Her writing and direction by Daniel J. Bryant came at us in spurts with many quick scenes. These vignettes do not elide into a deeper understanding of characters we experience in these staccato increments. This is a nervous, jerky production that appears to be ever on the move rushing to the next scene with little allowance for embracing and fully grasping the characters and their motivations.

This frenetic energy, however, is brilliantly enhanced by the inspired set designed by Baron E. Pugh. It’s the era of No Child Left Behind (2002-2015), signed into law by President George W. Bush; the principal law for childhood education from kindergarten through 12th grade. That entailed standardized tests which rewarded schools that achieved and punished those that did not.

The playwright dichotomizes this as the contrast between the dominantly black and Latinx, Carnegie Middle School, and Columbia Prep, a public magnet school whose elite student body is primarily white and Asian American.

In the design by Pugh we see left and right rows of lockers and, behind them, another row of lockers with a door to an auditorium in the middle. We are startled when stage hands first turn the modular unit of lockers to reveal a range of offices, class rooms, homes, and even seats on a bus. These quick set changes help in adjusting to abrupt, if somewhat herky-jerky narrative shifts.

Yes, this is a message play and we recognize its relevance but the treatment feels like the cliff notes or cheat sheet of complex issues that demand greater depth. For her purpose the playwright has reduced the educational crisis to the dissection of documented issues of cheating at both administrative and faculty levels, as well as,  a virtual pandemic among students.

There is, however, a difference in motivation. The principle of Carnegie, Ellis a former basketball coach (Melvin Ashton) uses sports analogies “take one for the team” in prevailing on his former star student and basketball star Devon Lawrence (Brandon St. Clair) and history teacher Mika Ramos (Jess Diaz Griffin) to doctor (erase and replace) the ABCD answers in the standard tests. It is a matter of the very survival of the school.

The motivation of the super achieving students at the high end Columbia is to enhance their GPA’s to the level of Ivy League standards. The highly motivated, Iranian born, Bilal (Justin Adhoot), a math and physics wiz, has done the research. He needs to raise his GPA by five points to meet the threshold for his first choice, Harvard.

For a nerd and straight arrow, largely ignored and shunned by classmates, the thought of cheating never occurs to him. Until it is raised by Sunghee (Pearl Shin) who is something of a drama queen and good at Spanish while Ibrahim is not. She, in turn, is not so great at math and physics. Her persuasive bent is that everyone is doing it and let’s make a deal.

As it turns out Bilal will provide correct answers not just to Sunghee and a couple of friends but indeed some 140. Overnight he has gone from outcast to top gun. He objects that one on the list deserves to fail as he has done zero work. But his father is a big shot and of course he will be admitted to Columbia.

Bilal has no so such leverage as the son of a man who runs a falafel and kebab shop. In the old country he was professor. Yes, social inequity. What else is new?

Because Treuhaft-Ali has created an editorial on what’s wrong with education of course the play comes to a bad ending. Characters get fired and expelled. Not that I disagree with her.

I saw the No Child Left Behind, cheating epidemic from a different perspective. Having been taught the test, or cheated their way through it, the freshmen in my college level classes were generally unprepared or unwilling to do the work. Initial grades came as a shock to them.

The scene between Bilal’s father Ibrahim, Juri Henley-Cohn, and the teacher, Joanna Krueger (Chavez Ravine), regarding grade inflation struck home with me. I had a number of those conversations with students. He states that “You gave Bilal an A-minus, which he tells me is the new B-plus. He needs an A to get into Harvard.” There are good schools other than Harvard, and A-minus is a very good grade, she replies. Right on.

Ibrahim presses that Bilal tells him that other teachers hand out more A’s. Her appropriate answers is that she has her own standards.

There are moments that ring true during the ninety minutes of presto changeo. Tamara Gardner (Toree Gardner) is only in her second year at Carnegie. She is having a hard time applying what she learned in grad school where she was an outstanding student. “You had your pick of schools” Davon her boyfriend states. She opted for Carnegie because she wanted to teach English to black kids. But as part of the deal she didn’t agree to take on roles as nurse and janitor.

She illustrated this by relating an incident where a kid got sick in class. The school has no nurse to send him to. When he threw up she had to clean the vomit. That disrupted the class which meant falling behind on the lesson plan. It is just the kind of systemic failure that leads to burnout and apathy in the classroom. It’s difficult to motivate students when there is a lack of support and resources.

Because Davon and Mika doctored the results, for the first time, students passed the Language Arts Proficiency Assessment. It sends a false positive and the corrupt Principle declares Gardner as “teacher of the year.” To celebrate there is a spontaneous dance celebration. That’s a pure hoot and great fun to see the cast make their funky moves.

Another delightful moment entailed Bilal and Sunghee during a long bus ride. Her energy and enthusiasm stands in stark contrast to his shy reserve. A flat out party girl she has scored vodka and proposes that they play a game of slap, drink, kiss. It’s obvious that he has done none of this before, which results in hilarious teasing. The scene brings out the best in the most outstanding actors in the cast. Their characters are the most developed and resolved.

We left this evening of theatre feeling that it provided a stern lesson. Overall, given a bit of grade inflation, I would give this play a B. Which is the new B minus.