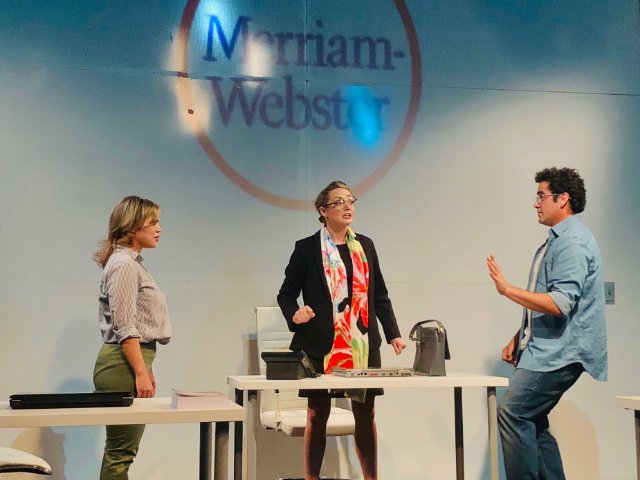 Photo courtesy of City Theatre and Thinking Cap Theatre An intense scene plays out in "Webster's Bitch," one of several short plays comprising the inaugural season line-up of "She Shorts." 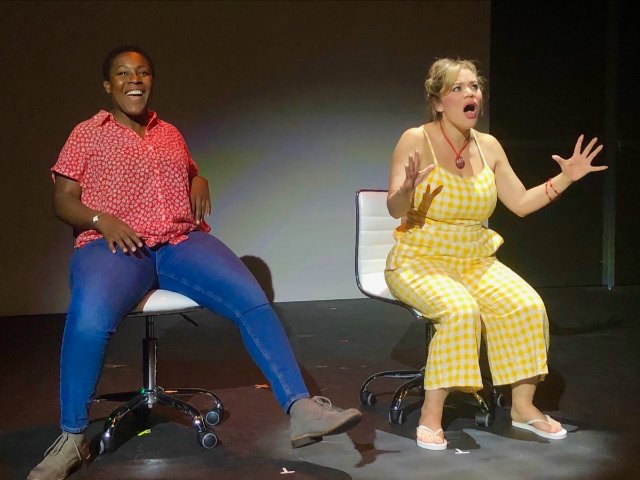 Photo courtesy of City Theatre and Thinking Cap Theatre Emotions range from laid back to disbelief and intense in the inaugural "She Shorts."

To begin with, throughout its 23 years, Miami-based City Theatre, the nation’s champion, developer and producer of short-form theater, has developed an impressive roster of “Shorts.”

Meanwhile, since its founding in 2010, the award-winning Ft. Lauderdale-based professional Thinking Cap Theatre has programmed plays and other events speaking to women and the LGBTQ population.

As a result of the companies’ collaboration, She Shorts hatched.

This program comprising short plays is about women. Further, the creatives and actors behind the series are largely women. She Shorts is in its first year. It opened recently at Thinking Cap Theatre’s resident performance space in Ft. Lauderdale. It runs through Aug. 4.

And judging from the inaugural event, this is an often-funny, sometimes thought-stimulating and empowering series of “Shorts.” It should enjoy a long theatrical life.

Certainly, #MeToo-inspired audience members, and those who simply care about equality, will feel emboldened.

But beyond that, She Shorts generally offers everyone a lighthearted, entertaining, yet meaty theatrical experience.

Of course, when a playwright has a maximum of about 10 minutes to tell a story and convey a message, discipline is key. For instance, overdone exposition and extraneous characters or material won’t suffice.

Indeed, audience members must get to know and identify key characters within the first few minutes. Also, the playwright must set the story into action quickly and ensure the piece has a clear beginning, middle and ending.

Within the inaugural series of She Shorts, some plays succeed better than others in the above areas.

Certainly, whether a play is lengthy or brief, audiences and critics generally prize creativity and originality. And so, it’s hard not to marvel at Egg Timer. The 10-minute play by Cristina Luzarraga is experiencing its southeastern premiere as part of the debut She Shorts line-up. By the way, this play is a City Theatre 2019 National Award Finalist.

In fact, merely reading a “blurb” synopsis will certainly pique your curiosity and interest. “Looking at baby pictures on Facebook, a woman is haunted by her ova, which want her to procreate pronto!”

The play begins simply. A woman with whom many others should be able to identify is agitated. She’s not getting any younger, and scrolling through Facebook photos of babies is reminding her that her child-bearing days may be numbered. Then Luzarraga slams us with the unexpected.

Strange-looking female creatures creep up on her. At least one sports an odd head dress, another wears a bow tie and nerdy glasses, while yet another’s hair is obviously dyed red. One speaks in a squeaky voice, suggesting perhaps a Munchkin or Oompa-Loompa.

These beings are none other than the woman’s eggs. And they want her to have a baby – now! They creepily, in a stalking-like, slow manner, circle around her. Bright, blinding lights rotate and illuminate the stage. So, too, does an intense orange hue.

Certainly, such expressionistic techniques create the desired dizzying affect. This allow us to sense what the woman is experiencing in her mind as her eggs chant or shout at her in unison.

But the conflict doesn’t stop there. Soon, a cool, cocky, hip and sultry person with sunglasses (think Elvis or another crooning, confident Rock star,) enters. She’s birth control personified. You can only imagine the tension that ensues as these diametric forces do battle.

Curiously, in this production (and not in the script) someone dressed in white and wearing a kind of steampunk head gear equipped with a light first appears. He scampers to and away from us, seemingly lost. It’s not clear, without asking, just who or what this being is. Sure, it produces some laughs. However, it seems to detract from the action. But overall, this production amounts to a creatively staged mounting of an original, unique, vivid and funny short piece. It’s one that might alert the ladies in the audience regarding their own child-bearing clock.

One of the staging’s strengths is the creative, varied manner in which director Elena Maria Garcia moves the actors about the stage.

Unfortunately, one cannot say the same for the mounting of Rights Restored, by Liv Matthews. This “short,” which is essentially a monologue, features first-time voter Gina. She tries to convince a voting precinct worker to take a picture of her wearing a voting sticker. The young woman wants to post the photograph to social media.

Oddly, actor Stephon Duncan mostly stands in one place while delivering her lines. As a result, the staging lacks variety. However, Duncan speaks in a joyful, cheery manner which helps enliven the play.

In fact, Gina has a right to feel upbeat. Rights Restored is an uplifting piece about second chances. In particular, it is based on the “Second Chances Act.” Florida voters approved the measure in 2018. It restores “the eligibility to vote to Floridians who have done their time and paid their debts.”

For her part, Matthews doesn’t glorify Gina’s past behavior. Clearly, this young lady isn’t perfect. But she’s paid her debt to society. And you can’t help but smile as she cheerfully shows off her “I Voted” sticker.

Politics, gender, female empowerment and sexual identity are themes in other “shorts” among this year’s line-up.

One of the funnier and touching pieces is Miles of Home Made Candy. It centers on a mother who gets a different but all-too-real scare on Halloween night. Indeed, “The Times They Are-a-Changin.” But change is occurring faster than Edna can keep up. And for her, it’s personal, because it involves her teenage son.

Chances are, you can imagine how Edna’s home becomes a house of horrors for her when she sees her son dressed as a girl. In fact, he may even prefer that gender. Oh, and he may very well be gay, she suddenly learns. It all hits her at once, like an unexpected punch to the stomach from a boxing champion.

As a matter of fact, Gangloff-Levy disappears into her character. She conveys authentic, painful emotions through her voice and face. In short, the performer makes you forget that she’s acting. Those wide-eyed, watery eyes communicate fear, shock and pain better than words can.

Speaking of words, their power to inflict damage and shock is on display in the inaugural She Shorts.

But overall, women come out on top in this light-hearted evening of “shorts,” featuring strong female characters.

And by the end of the evening (or afternoon), you’ll likely leave the theater with one empowering phrase in mind: You Go Girl!

She Shorts continues its run through Aug. 4 at The Vanguard Sanctuary for the Arts, 1501 S. Andrews Ave. in Ft. Lauderdale. Show times are 8 p.m. Thursday through Saturday as well as 3 p.m. Sunday. General admission tickets are $40. To purchase tickets, visit https://brownpapertickets.com/event/3922646. For more information, visit http://vanguardarts.org or call (954) 610-7263.