The Times They Are A-Changin 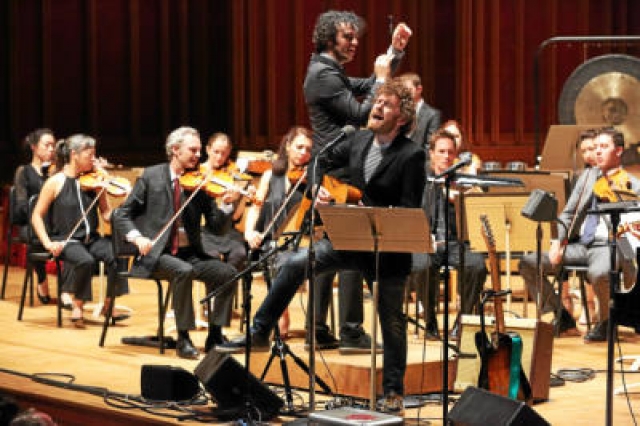 Brooklyn based chamber music orchestra, akin to Big Band sounds, The Knights, played to a capacity audience at Ozawa Hall on the Lenox property of Tanglewood.

The program for the evening was titled, ‘The Times Are A-Changin’, a song or even an anthem, made famous by a recent Tanglewood performer, Bob Dylan. The song closed the evening’s program.

The Knights did try to keep up with the theme of the concert, The Times Are A-Changin. Haydn’s Symphony 64, Tempora mutantor, translates to ‘times change’, the focus of the evening.

Talented band member, Gabriel Kahane, was the ‘rock star’ of the band, showing off his talents on vocals, electric guitar and piano. The Knights functioned as a back-up band for musician Gabriel Kahane, who played the audience masterfully. He danced around the stage like Fred Astaire and sang like Paul McCartney.

Kahane studied at the New England Conservatory before finishing his degree at Brown. He is a new breed of songwriter, having written songs for the LA Chamber Orchestra, the Punch Brothers, who he has been touring with, as well as works for Carnegie Hall.

The Knights music for the program did not bridge a gap. It was the night of the big divide, joining a Shubert symphony, a jazz song from the '30s and a Bob Dylan protest song together.

It is now common place to merge musical styles together rather then highlight one sound.

That is the strength of The Knights, a band that I would return to see, night after Knight.