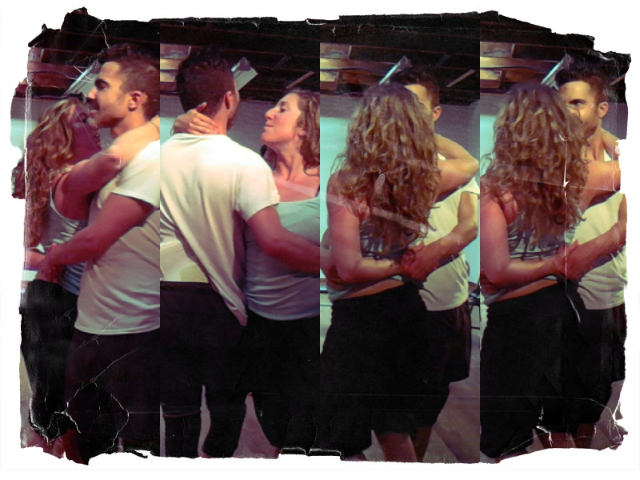 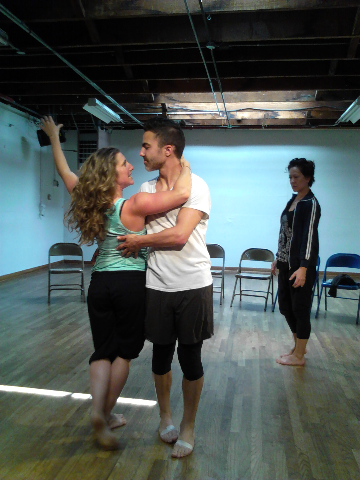 "I love the smell of napalm in the morning," Robert Duvall in the movie "Apocalypse Now."

A man.  A woman. An unadorned stage.  Screaming.  Loving.  Bounding.  Lying.  Ravaging.  Ravishing.   This is "Tender Napalm," a verbal and physical firestorm.  Philip Ridley has written a two-hander of relentless intensity reflective of the "in yer face" theater movement style.  The artists deliver the work with consummate skill and total conviction.  But while the production quality is highly compelling, some may feel disoriented by the chaotic plot points or crushed by the gravity of the material in the play.

Our unnamed characters are a couple that shares passion and loss.  The play is a series of many vignettes, mostly annotated from the point of view of one character or the other.  Often, the partners build on one another's stories, but sometimes in contradiction to the previous one.  The timeline is non-linear, and reality and fantasy often cannot be discriminated, if indeed there is a difference.

Several recurring themes frame the arc to provide color to the story telling.  Detailed sexual activity with graphic anatomical references as well as analogies such as bullets and exploding grenades are often described.  Unfortunately, the tsunami of f-bombs reduce their effectiveness and seem like a child's learning a nasty word and mindlessly repeating it until it becomes meaningless.

The couple are figuratively marooned on an island with a legion of monkeys, but some incidents are in flashback to other places.  In some, the woman is related to gods and sea creatures and has an octopus's tentacles.  In others, unicorns appear.  While some are interesting or poignant, contexts shift so often that it is difficult to capture the meaning of all of the symbols, assuming that each is intended to mean something.

The strongest points of the production are the performers and the choreography.  Willem Long and Anastasia Barron are outstanding as the characters.  They both exude stage presence.  Long commands the stage with an animal-like stalking ferocity, and Barron matches him in formidable yet feminine response.  They each roar with enthusiasm throughout - gritting, smirking, tantalizing, and taunting.  One strength of Ridley's dramatic design is that it places focus on the actors, as well as tremendous burden.  These actors answer the call.

Choreographer Bridgette Loriaux has created sensational end-to-end movement design involving robust elements of acrobatics and modern dance, with nods to pas de deux and ninja and more.  The choreography coordinates beautifully with and enhances the drama.  Often, the actors are vocalizing at full bore while twirling, thrusting, leaping, writhing, or wrestling.  It's like delivering a maximum volume, extremely emotional acting performance and a highly athletic dance performance - at the same time.  Loriaux and director Robert Estes  extract about as much power from the script as you can expect.

The East Bay has a pretty remarkable performance scene.  Berkeley has long been a center of well-supported theater and high-brow entertainment.  Oakland has been an earthier font for many forms of contemporary urban music.  But recently, Oakland has sprouted edgy and socially conscious theater companies.  Ubuntu Theater Project won the 2016 Critics Circle Award for best new company in the Bay Area.  Ragged Wing Ensemble and several other small performance companies reside at the Flight Deck downtown.

The peripatetic Anton's Well, led by artistic director Estes,  produces challenging plays like this one in both cities.  "Tender Napalm" is a perfect fit, as its resource requirements are small, and its impact is high.  Yet, the play is akin to wine.  To some, even in its finest vintage is only a drink.

Reposted courtesy of For All Events,