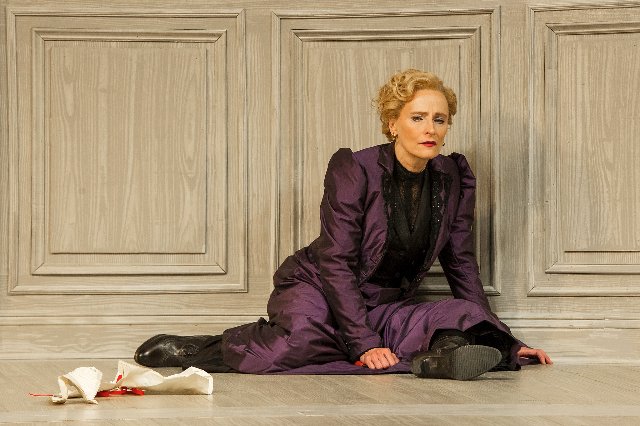 A dejected Laila Robins as Nora. Photos by Daniel Rader.

There's a knock at the door. 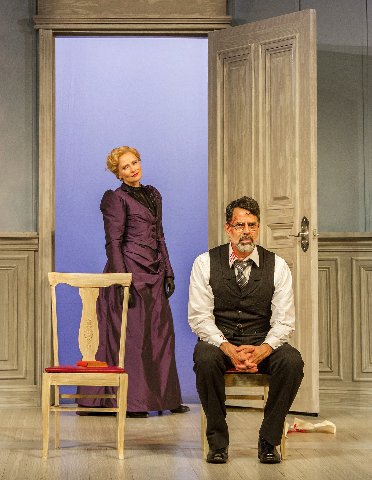 This parting is not sweet sorrow. 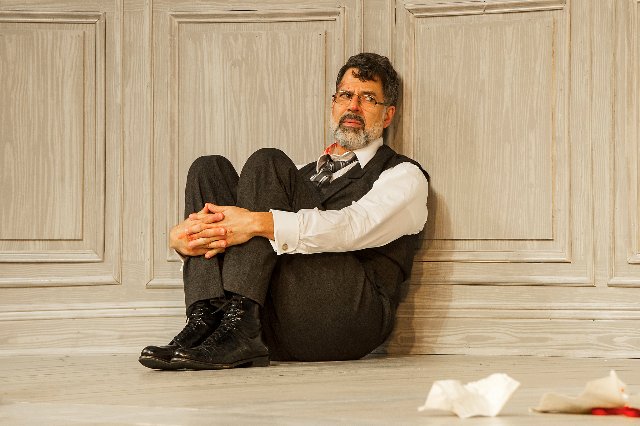 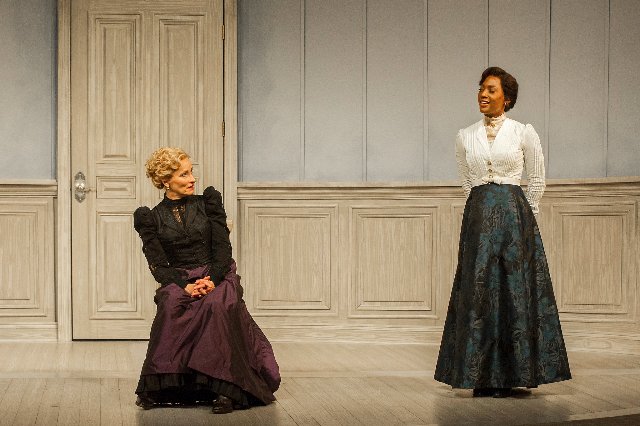 The overly precocious teenager Emmy (Ashley Bufkin) has the upper hand over her feminist mother.

A Doll’s House, by Henrick Ibsen, premiered in Norway on 21 December, 1879. The title references how Torvald Helmer treated his wife Nora as a fragile, easily manipulated pet and plaything under his total and legal control.

During eight years of marriage Nora bore two sons and a daughter. Her transgression was to forge papers secretly to borrow money financing convalescence in a warmer climate to cure her husband. She has been blackmailed and disclosure of the crime will expose the family to dire consequences. It will end his career in banking.

Rather than gratitude for her life-saving risk Torvald turns on her ferociously. In the final scene, a stunning reversal, Nora walks away from him and their children. The play ends as she slams the door. It was a shocking sound that reverberated through theatre then and now.

It has provoked debate ever since focused on issues of the sanctity of marriage, a woman’s rights vs. responsibilities as a wife and mother. How could a woman abandon her children? Was it an act of courageous self discovery and liberation or selfish and cruel? Without the support of a husband, and no negotiable skills, what fate lies ahead? For fallen or abandoned women and widows the options ranged from menial labor to prostitution.

The Ibsen play premiered two years after the publication of Anna Karenina by Leo Tolstoy. Instead of liberation and self discovery she left her family and children for an affair with the bachelor Count Vronsky. Shunned by society, then abandoned by her lover, a thousand pages later she ends her life leaping in front of a train. That was an analogy to the social mores which utterly crushed her.

A commonality of the works by Ibsen and Tolstoy focuses on the legal rights of husbands who refuse to divorce wives that disgrace and abandon them. In Anna’s case she might have followed the rules by discretely pursuing an affair while maintaining the charade of marriage. That was the norm for society in the 19th century.

As the reworking by Lucas Hnath, Doll’s House Part 2, postulates Nora has prospered, but at devastating cost to herself and the family she abandoned.

If the slamming door was the iconic metaphor of Ibsen’s play it is the logo for Hnath's.

As Gloria Gaynor put it in the 1970s "I Will Survive," an anthem for abused women, "Go on now, go, walk out the door/
Just turn around now/  'Cause you're not welcome anymore.”

In the austere set designed by Brian Prather the dominant door is at the center of a curving, wainscoted wall in the foyer of Torvald’s home. Hovering above is an oval ceiling. The space is utterly bare save for two period chairs which are moved about so forcefully that they become characters in the tense unfolding drama. Anticipating interactions Nora (Laila Robins) makes a great fuss about arranging them.

The sumptuous silk dress with jacket, black lace blouse and floor length, flowing skirt, designed by Jen Caprio, signify that Nora has thrived in the fifteen years since returning to the house. In an exchange with the maid, Anne Marie (Mary Stout), we get the back story.

Initially there are hugs and warm greetings. Then a guessing game as Nora teases her into speculating just how she has become so independent and financially secure. Are you a lawyer?  With a rich man? No, it seems that she writes books.  A thinly veiled story of her failed marriage, written under a pseudonym, is a best seller. As a proto feminist Nora dispenses advice to women.

At first, with no money, she lived in a boarding house and used her only skill, sewing, to make a meager living. She saved enough  eventually to live alone in an abandoned cabin far north in the woods. There she had time and solitude to pursue writing, We learn that she has had lovers but no sustained relationship.

What emerges is a profile of a successful, independent, but ultimately selfish woman. She has returned not for sentiment or reunion but to seek a divorce. To Anne Marie, whom she hopes to recruit in her plan,  she reveals several options. It seems, if still married, Torvald has control over her royalties. She has been surprised to learn that he never divorced her.

In this initial exchange Robins conveys control, cheer and optimism. There is little remorse or curiosity. We feel an unsympathetic distance from a cold woman who expresses no interest in seeing the children whom Anna Marie has raised. There is a curious parallel explored that the maid has abandoned her own child to care for those of her employer. This imbues her with divided loyalties in the ensuing conflict.

It is difficult to buy into Hnath’s take on Nora as she is directed by Joe Calarco and performed by Robins. It is a next chapter of classic Ibsen that is too informed by the conceit that hindsight is 20/20. Hnath presents her as prophet of what evolved from her revolutionary actions. It lands on us too neat, clean and cold.

As I recall Nora was more equivocal, compassionate and vulnerable. There was a difficult, soul searching, heart wrenching process that led to her actions.  This version of Nora reeks with arrogance and triumphant independence. She is more harridan than heroine. Where is a humanizing shred of regret? We all make difficult life choices which weigh on us. There is none of that in this take on Nora exacerbated by glamour and high fashion. Here aura is the hauteur of the renowned courtesans. She is more Melania Trump than Gloria Steinem.

That’s hinted at when she looks around the bare room. On the wall is the ghost of a removed picture frame. It was a portrait of her mother. Where is my piano she asks? It seems that every item associated with her has been trashed or sold.

That serves as an analogy of her loss. The empty house signifies a struggling single parent Torvald (Christopher Innvar) deeply damaged and frozen in time. The slammed door was the beginning of her life and the end of his.

The intent of Nora was to visit the house while he was working at the bank. He has unexpectedly come home at mid day. He does not appear to recognize her. Then his response is paralyzed shock. He rearranges the chair she has so carefully placed so as not even to look at her. He will listen but with emotional distance.

The Torvald we remember was handsome, charming, manipulative, sexist, domineering and patronizing. Innvar plays him as a shattered shell who has barely survived while she has soared and prospered. It’s not a pretty sight and there is a less than credible explosive, furniture smashing, confrontation. Until that outburt Innvar plays him as a zombie. The reversal is not a return of the old Torvald but a surprising new one. Bathos turns to comedy when he bellows “I just can’t win!” Indeed, poor pathetic Torvald. What a wimp. Nora always has the upper hand.

The end of the first play is repeated in Part 2. Yet again. we watch her put on a high couture jacket and sleek gloves then walk out the symbolic door. For the damned Nora is it a surrogate of the Gate of Hell? There is no reverberating  slam this time, but yet again, the slumped and numbed Torvald is utterly whipped and devastated. Hnath is tougher on him than even Ibsen was.

The scene with her daughter Emmy (Ashley Bufkin) is gratuitous. She told Anne Marie that she wasn’t interested in seeing the children. Is that credible? The dramatic device for the meeting is that Nora needs help to secure a divorce from the stubborn Torvald. It’s his last shred of control and vengeance.

If Emmy was two she is now 17 and engaged to a banker. Her intended works for Torvald. She is wise beyond her years, as written archly by Hnath, and more than a match for Nora. The role is played well but rings false. She is far too coy, vicious, calculating and sophisticated. There is a vengeful, oh so sweet twist, as she suggests another plan. The troubles will all go away if only Nora will die. A faked death certificate will solve everything. Oh my, really?

In the imagination of Hnath the daughter, raised by an abandoned but loving father and loyal maid, has become a fine young woman. She is everything her mother is not. Espousing eagerness to submit to marriage Emmy denounces Nora. How has her mother's screed led women to abandon their families? How many lives has she ruined?  Nora has an impossible challenge defending feminism to her own daughter.

All of which makes good old Torvald not so bad after all. That's not what Ibsen intended. And, by the way, his characters never said shit and fuck you. That's on Hnath and why his play is a shuck.