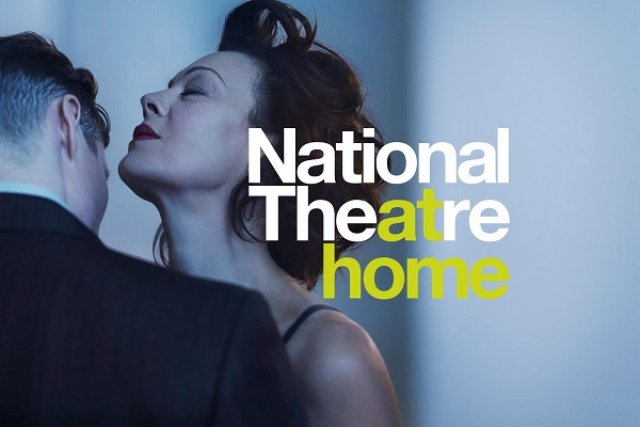 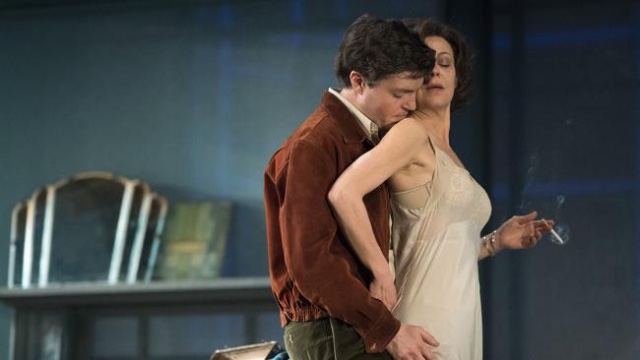 Tom Burke and Helen McCrory What is this thing called love? 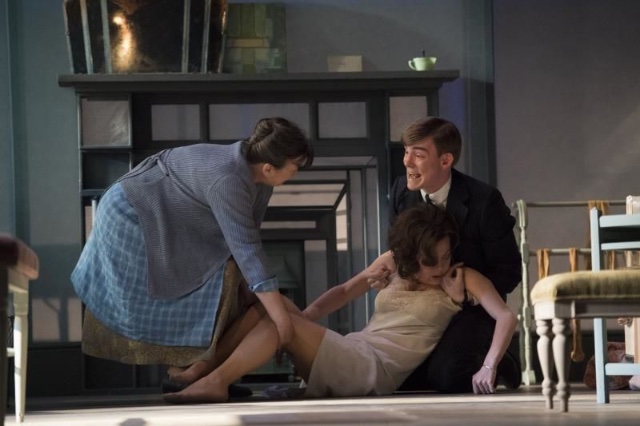 Marion Bailey, Helen McCrory and Philip Burton 'Till death do us part"

Carrie Cracknell directs Helen McCrory in Terrence Rattigan’s Deep Blue Sea. The play, first produced in 1952, is often called Rattigan’s best. The role of Hester Collyer, estranged wife of a British Judge, is one of the finest for a female actor.

This production takes the play into a new zone. Love as presented is no simple movie emotion.  Instead, as attraction so often does for real humans, it “passeth all understanding.”  This phrase from the St. James Bible is used to describe a religious experience.  The ‘love’ experienced by Hester dwells in a space closer to religious ecstasy than most characterizations.

Can you imagine Lady Chatterly’s husband Clifford telling her that her lover, the gardiner Mellors, is beneath her intellectually?  Hester’s husband says just this.  By the time he makes the observation, we find him absurd, because we have bought into the illogical feeling that McCrory enacts.  Who cares about intellectual equality when you are swept up in an encompassing storm of attraction. Hester's feeling is unchecked by criticism and freed of will.

In the past, like Edward Albee’s Virginia Woolf, discussion has centered on the homosexuality of the playwright and the suggestion that male/female pairing is really male/male. In fact, the play has been adapted for male actors. What is central in the National Theater’s production is Rattigan’s own interest, “the illogicity of passion,” no matter what the sex of the object.

McCrory, aided by Cracknell, succeeds in emitting this sense  and produces a tour-de-force performance. We really never question Hester’s feeling for Freddie, even if, after we meet him, we don’t feel the same way ourselves.

Love here is subjective and so transporting that the longed-for mutual connection becomes beside the point.

Hester may be swept up in Freddie (Tom Burke), a pilot in the Second World War. Out there facing death daily is the high point of his life.  A decade has passed.  He is not shell-shocked like Septimus Warren Smith in Virginia Woolf's Mrs. Dalloway. His return flattens experience. Being the object of unbounded passion may have intrigued him for a while.  Its demands have become more taxing than they are worth.  He exchanges a weekend golfing for celebration of Hester’s birthday.

Hester attempts to kill herself. We meet her facing death in front of her fireplace. The end of Freddie means that she is not dancing with someone else’s death defiance, but her own.

It is surprising that Freddie is sufficiently self-aware to understand that he cannot bear being the object of such large feeling.  He must exit.  At the end, he flirts with Hester’s comforts for a moment.  Hester is at last able to push him away.  He cannot receive her feeling.  She has explained to her husband William that at least from time to time Fredie was really there for her.  Implying of course that the Judge was not.

Among the neighbors who move in and out of Hester’s world, a doctor (Nick Fletcher) who appears to have had his license removed comes to Hester’s help, bringing her back from gas and pills at the play’s opening, and then talking about her paintings and explaining that life can be worth it, even without inexpressible feelings for another.

The play is a rich portrait of British society, played out in characters from various backgrounds who are tenants in the building. They move in and out of Hester’s tawdry space.

Streams from the National Theatre end with Amadeus. Airing now is a 2016 production of ‘Amadeus’ by Peter Shaffer. The Amadeus in question is, of course, Wolfgang Amadeus Mozart – here, a young prodigy whose success is in the hands of Vienna director of opera Antonio Salieri, played by masterful National Theatre regular Lucian Msamati. This particular production was directed by Michael Longhurst and chucked the Southbank Sinfonia into the mix, a move that made this ‘total theatre.'