At Don and Ann Brown Theatre. 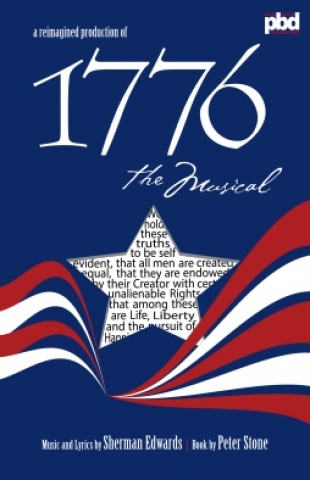 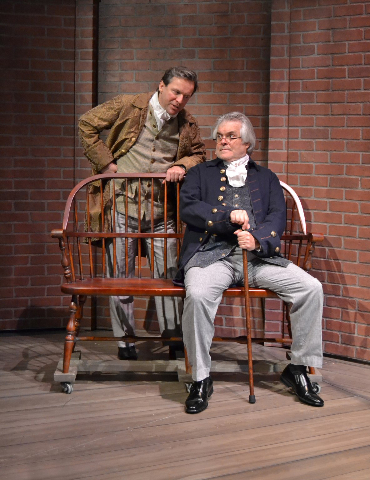 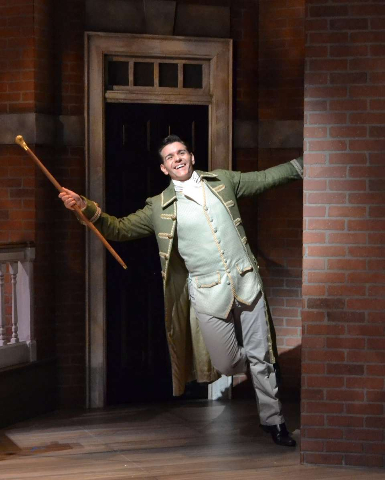 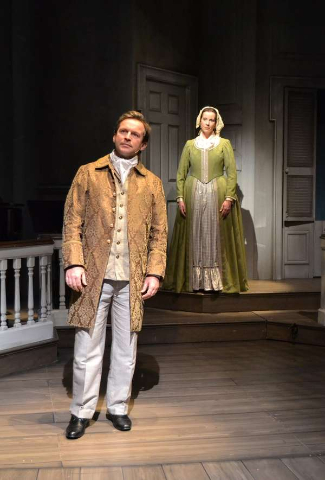 Setting the musical “1776” in present-day England is probably not a good idea.

Fortunately, no such piece-destroying choice is made by Clive Cholerton, director of Palm Beach Dramaworks’ brilliant current production.

The well-known historical musical about our founding fathers’ mission to make America independent from England is on stage through July 24 in the intimate, semi-circular Don and Ann Brown Theatre.

His  version deftly shows how some things never change, especially in politics.

The following flashes across the screen: “It’s never been this bad! You sure?”

We then go back in time to the scorching summer of 1776 Philadelphia. We see an Independence Hall that doesn’t quite resemble the one you might have visited during a trip to the City of Brotherly Love. The set, designed by Michael Amico with red bricks and dark colors, reinforces the historical character of the place. Still, you get the sense this spacious setting could stand for any number of places (suggesting, perhaps, that political deals these days are kept hush-hush and take place in secretive spots?)

Also missing from Amico’s set is an old-fashioned manual board containing the names of the colonies with “yeas” and “nays” under each of them. The PBD production brings “1776” into the digital age, with a technology-driven board and one that signifies the date. Throughout, it changes as the action creeps closer to July 4, 1776. That, by the way, is NOT the day the Declaration of Independence was signed (liberties are taken with historical facts, although the story is based on actual events). The declaration document was approved on July 4 by our founding fathers. According to a note in the program, the bulk of the signing occurred on Aug. 2, and continued for at least another two months.

One of the directorial choices is to have actors wheeled onto the stage on chairs. They’re also spun around and moved to the opposite side of the stage during a date change or as we imagine they’re taking a vote. Might this suggest the notion that many politicians are manipulated --merely puppets or mechanical beings driven by others to vote one way or another rather than through their own volition?

Cholerton arranges the actors in such a way that they’re not seated orderly on chairs behind a bench with the colony they represent noted in front of them. Rather, they’re arranged haphazardly. Some are seated in a stand-alone chair, others on a bench, while yet others stand and some delegates aren’t even in the room during discussion; they enter only when a vote is taken. One of the delegates reads a book while the congress is in session. This disorganization and apathy in the case of the book-reading delegate can suggest the state of disarray in which government has found itself during our country’s history. One could interpret this production’s directorial choices as warnings to modern politicians: take governing seriously and pay attention.

PBD’s vigorous, convincing production pares down the musical’s traditionally large cast, so that actors, with the exception of the performer playing John Adams, play multiple roles – one conservative character and one liberal. As a result, we’re forced to consider both viewpoints. Now that’s something our one-minded, argumentative politicians could benefit from.

This is also a non-traditional production in that it has some female actors playing some men’s roles. The hairstyles of the day in 1776 for males weren’t exactly manly. Besides, the cast of a traditional production of “1776” is dominated by male actors, with just a handful of actresses. Having women play men brings diversity to the cast and reinforces the fact that the second continental congress comprised a diverse group of individuals. They had their own set of beliefs, convictions and came from diverse backgrounds. It’s only at the end that the characters become a unified whole, one by one standing up to sign the Declaration of Independence.

One of the musical’s biggest strengths is that despite its predictability (the end result, of course, is never in doubt) book writer Stone tells a suspenseful story, not a boring history lecture. We’re riveted to the stage as we wonder whether these stubborn, opinionated folks will finally and unanimously agree to approve and sign the declaration. Cholerton and his crew ensure that the tension is palpable throughout.

The acting, singing and the work of the musicians is top-notch. Scenes of dialogue transition seamlessly into song, and the performers make singing seem as natural to them as breathing. The actors are blessed with robust, expressive singing voices, backed by a small but clear and strong-sounding group of musicians. The performers disappear into their characters, living fully in each moment during that scorching summer of 1776.

The atmosphere is enhanced by the mostly deft technical work, including John D. Hall’s varied lighting design. It’s dark and unrealistic during intimate and suspenseful scenes, as well as those taking place in Adams’ imagination. By contrast, the lighting is bright during upbeat, cheery scenes.

One of the production’s shining stars is Gary Cadwallader, who brings a Jack Lemmon-like intensity to Adams. Cadwallader imbues the character with an intense, fiery disposition, always leaning forward as though ready to pounce. The actor speaks in a sharp, belligerent and passionate tone, never leaving any doubt as to how the historical character stands on the issue of independence.

But “1776” isn’t a history lecture, nor is it a means to depict these characters as talking figureheads or saints on a pedestal. These are well-drawn, fallible human beings, people we might recognize from our lives.

Cadwallader’s Adams helps illustrate this. We not only witness the argumentative, passionate side of Adams, but his sensitive side. This is true especially during his scenes with his wife, Abigail (a compassionate, devoted Laura Hodos). During these scenes, set largely in Adams’ imagination, Cadwallader tones down his voice considerably, convincingly sounding like a vulnerable human being in need of advice. We sympathize with him as he gently holds his wife’s hands. The two back away slowly, their arms reaching out as though they’re hesitant to leave each other.

Nicholas Richberg matches the intensity of Cadwallader’s Adams. Richberg portrays John Dickinson, the leader of the conservative opposition to Adams. Richberg invests Dickinson with an in-your-face, sharp-tongued passion. Watching the pair, you feel as though you’re witnessing two formidable trial attorneys going at each other.

Richberg doubles as Richard Henry Lee in a playful performance full of glee. The actor is nimble during the number “The Lees of Old Virginia,” during which the character celebrates how Virginia was famous for the many Lees who lived there. The song comes early in the musical, after it’s suggested that a resolution for independence would stand a better chance if proposed by someone other than Adams. Enter Lee, who extols the Lees virtues and sings of his commitment to deliver a resolution. The song moves the plot forward, and some of the lyrics are clever, but the melody’s and certain lyrics’ playfulness seem out of place. The melody also sounds derivative of the tune to “Old McDonald.” Are we watching a children’s show?

Some have suggested “1776” could work better as a straight play. The third scene holds the record for the longest time in a Broadway musical without a note of music; more than a half hour passes between “The Lees of Old Virginia” and the next song, “But, Mr. Adams.”  The latter song allows characters Benjamin Franklin (a charming, affable Allan Baker), Roger Sherman (an honorable James Berkley) and Robert Livingston (a gracious Sandi Stock) to convey their humility after they’re each asked to author the declaration.

Shane R. Tanner imbues southern firebrand Edward Rutledge with a stinging, disagreeable personality, particularly in the song “Molasses to Rum.” Tanner sings it in a strong, fierce voice to express Rutledge’s belief in the necessity of slaves. His voice and facial expressions take on a sarcastic tone when he criticizes his northern colleagues’ hypocrisy; they denounce slavery just as they benefit financially from it, he claims. Tanner does what he’s supposed to do -- make us hate Rutledge

The song “He Plays the Violin” gives Mallory Newbrough as Martha Jefferson, Thomas’ wife, a chance to shine. The song serves mainly to humanize her husband, allowing us to see a different side of the declaration’s principle author. In the song, Newbrough convincingly conveys tenderness and bliss, as well as dreaminess as her graceful Martha moves as freely as a swan. The song’s delicacy mirrors that of playing a violin.

Another production highlight is “Cool, Cool Considerate Men,” a minuet-like song that serves as an anthem for conservatives, and is sung gracefully and with serenity by the actors playing the conservatives. The song’s as soft and pleasant to the ear as the violin song. However, its lyrics would ring harsh to those who supported Bernie Sanders in his bid for the 2016 Democratic presidential nomination.

We sing hosanna, hosanna
To our breeding and our banner
We are cool

“Piddle Twiddle and Resolve” rings familiar to us because it references basically a “do nothing” congress.  The song “The Egg,” meanwhile, is a vivid metaphor for how America was “hatched” from England.

“The eagle’s going to crack the shell of the egg that England laid,” Adams sings, referring to the bird the congressmen decide, after some debate, will stand for the country.

With a contentious election year that’s sure to be filled with fireworks, it’s the perfect musical to perform now in America. It may not include the character of Alexander Hamilton, but is the next best thing to a certain theatrical phenomenon that’s an impossible ticket on Broadway. It, too, is set in the summer of 1776, focusing on scrappy individuals, particularly the title character, playing key roles in the revolution.

With many wondering and worried where this country is headed, “1776” can also renew our pride in America, reminding us why this nation was founded and how hard our founding fathers fought to create it. Perhaps seeing “1776” can spur us into action in some way as well.

Despite all their bickering, our founding fathers showed flashes of optimism.

“Yet through all the gloom, I can see the rays of ravishing light and glory,” Adams says in the musical.