1984 On Stage in Pompano Beach 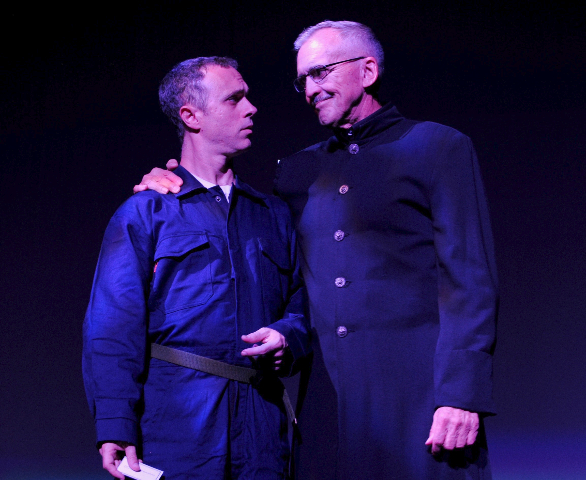 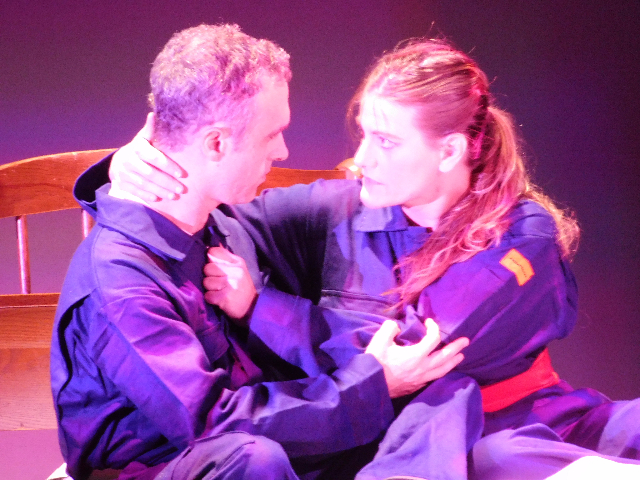 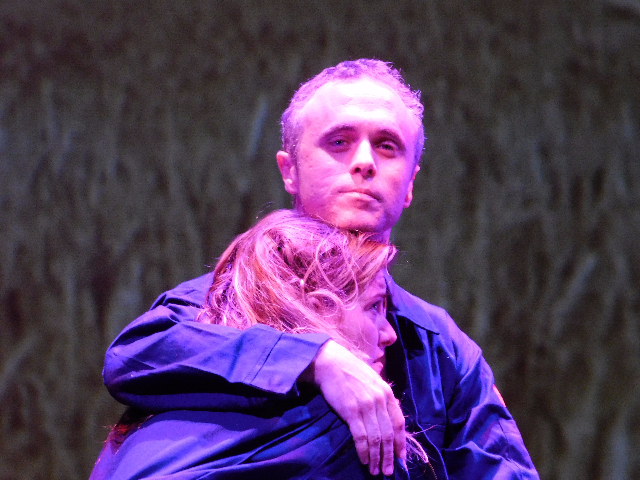 There’s no question “Big Brother” is staring at us in Outre Theatre Company’s production of the disturbing, thought-provoking George Orwell classic 1984. It runs through July 30 at the Pompano Beach Cultural Arts Center.

Several images on stage show an elderly, cross, if not outright intimidating man looking straight at us.

This reinforces the fact that Orwell wrote his cautionary tale to warn the public (us) about totalitarian states replacing Democratic countries.

It's hard to watch at least half of Outre’s production – not because it’s particularly unsettling. No, much of the pre-intermission portion is rather tedious. Under Skye Whitcomb’s measured direction, for at least the first half of the show, there’s little hint of tension.

The characters are living in a dystopian future during which “Freedom is Slavery,” “War is Peace” and the government tells you what is the “truth” (sound familiar)?

Freedoms we take for granted don’t exist in the characters’ country, named Oceania, one of three fictitious superstates. If you have forbidden thoughts, or have sex and a guard catches you, the government might kill you.

Yet for all the reasons to be scared or at least tense, the actors pre-intermission mostly play their parts in a strangely laid-back, seemingly disinterested manner. It’s even hard to hear the actors and voice-overs at times.

On the other hand, the lower volume of those voice-overs could suggest that in Orwell’s imagined society, a person can quiet, but not silence them; they’re a constant reminder, however soft, of the ruling party and “Big Brother's" permanence.

The first act may have shortcomings, but it isn’t a complete failure and the production as a whole has strong points. When citizens adhering to the party’s dictates gather to protest a dissident, the noise renders that person inaudible as he speaks from a projector screen. The chants and mocking from the actors playing the citizens are forceful and deafening. You’d think these folks were Civil Rights marchers confronted by people hidden under white robes and hoods.

Lighting designer Guy Haubrich enhances the set's bleak look (he designed the sound, lighting and projection). The designer leaves much of the stage dark, except for spotlights on actors.

Orwell wrote his novel in 1949 -- a few years following fascism’s defeat and during the beginning of the Cold War. It’s unclear why Orwell settled on the year 1984 for his novel, which became a bestseller on Amazon soon after Donald Trump’s inauguration.

The program doesn’t specify the time period, but just as the 1980s was the future for Orwell, director Whitcomb has clearly set the play in what for us is the future.

Strange-looking lights illuminated on a black screen might suggest eyes staring at the characters. One could also interpret these lights, which lend the setting a futuristic flavor, as cameras amid the dark. The implication: It might be pitch black outside, but someone/something is capturing your every move.

This probably wasn’t Whitcomb’s intention, but several dark lighting devices poke out from backstage and into our view. Somehow, they resemble cameras or other devices. This further reinforces the production’s emphasis on a future featuring constant surveillance. Even today, certain devices can pinpoint our exact location -- and who knows who's able to access those devices.

The play is an adaptation by Andrew White which, despite haphazardly arranged scenes during the first act, is largely faithful to Orwell’s chilling, descriptive novel. The past exists merely in dream states. We witness a sleeping Smith imagining his more carefree childhood, walking amid snow that of course no longer exists; global warming has made sure the white stuff disappeared.

One of the frightening things about 1984 is that the party in charge is somehow able to “erase” history, which then ceases to exist. It never existed, in their version of a fact (alternative fact?), because they told you it didn’t. Among the history being erased is the intricacies of the English language. Party members remove complicated words and nuance in an effort to keep people from thinking.

Fortunately, there is nuance in several performances, which at times pack power. That’s particularly true with Jennipher Murphy as Smith’s love interest, Julia. She's charming and carefree when necessary. However, after guards discover she and Smith making love, they roughly carry her away. She unleashes painful-sounding shrieks which seem so real you want to help the poor woman.

Peter W. Galman plays prominent party leader O’Brien with the right mix of sternness, a disarming charm and subtlety. While his O’Brien isn’t explosive, it’s clear he means business and Smith should cross him at his own peril.

According to media reports, a current Broadway production of a different adaptation of 1984 is immensely disturbing. The interrogation scene between O’Brien and Smith is reportedly so unsettling, audience members have vomited and fainted.

White’s adaptation, and Outre’s production of it, features some disturbing scenes without making audiences queasy. Smith is strapped to what resembles an electric chair and, like in the novel, the movement of a lever increases pain that jolts throughout his body. A few feet in front of the chair is a grave-like opening. We can’t help but wonder: Will O’Brien and the guards toss him in there to be swallowed up by the earth?

The daring and edgy Outre Theatre Company deserves credit for not shying away from this bold, disturbing tale. More theaters need to follow Outre's lead in staging it. Many parts of Orwell’s novel sound like exaggeration and “just a story.” But the novelist forces us to consider: Can we, in this era of “Fake News” and “Alternative Facts” really dismiss everything that happens in 1984 as exaggeration? Can it become reality?

If Orwell were alive to witness what’s happening in our country and the world at large, he might utter four words.

I told you so.