On a Clear Day You Can See Forever

Musical at Irish Rep in NY 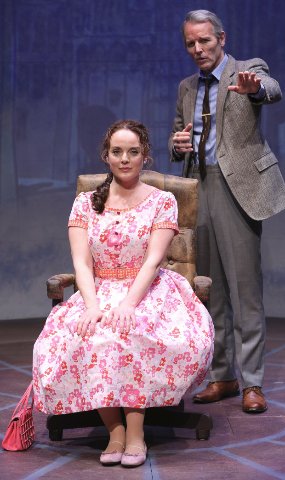 On a Clear Day You Can See Forever, the Alan Jay Lerner/Burton Lane musical, is getting a delightful production at the Irish Rep under the skilled hand of director (and adaptor) Charlotte Moore.

This show has a checkered past. It opened in 1965 on Broadway, Lerner’s first show without longtime collaborator Fritz Loewe. It ran under a year, garnering only three Tony award nominations and winning none. A 1970 movie version had significant plot changes from the original and starred Barbra Streisand. Since then – even more changes in the plot including the 2011 short-lived Broadway revision that changed the sex of one leading character and the time periods!

Along the way, not only songs, but scenes and supporting characters have come and gone.

This production keeps most of the basic elements of the original plot, removing two ancillary characters, some ensemble numbers that were required in the 1950s and ’60 in musicals, and a few songs.

The result is a clearer show that lets the fine performances of Melissa Errico and Stephen Bogardus, plus the singing of John Cudia shine through. For this show, the Irish Rep has a small musical ensemble including a harp off to the side.

The plot – which even Lerner said couldn’t be considered realistic in anyway – has some connection to Brigadoon: the attraction of the idealized past to the imperfect present.

Set in the 1960s, Daisy Gamble is having difficulty getting a job at a high end NYC law firm because she can’t stop smoking. So at the urging of some friends she goes to a session conducted by Dr. Mark Bruckner who specializes in hypnosis to overcome various problems. When she quickly and accidently goes into a trance (Bruckner was hypnotizing someone else), he becomes intrigued. Over the course of some days/weeks, under hypnosis she reveals a previous life as Melinda Welles, a wealthy heiress in 18th century London who defines convention by marrying a portrait painter for love and later dies tragically. (Theater lovers may catch the references to other plays in the names of characters and things.)

Bruckner finds himself attracted to Melinda (more so than Daisy) and doesn’t tell Daisy about her previous life. Is reincarnation possible? His colleagues at the Institute warn him to stop his investigation; none believe it is real. Of course, the story hits the press, Daisy discovers the truth about her previous life and Mark’s attraction to Melinda and not her, and Mark realizes that Melinda is just part of Daisy whom he really does love.

The scenes switch between NYC in the ‘60s and England during Melinda’s lifetime. The ensemble (eight people) play multiple roles as Daisy’s friends, Mark’s colleagues and secretary as well as Melinda’s father, mother, potential suitors and others in that period.

This adaptation removes some of the original songs, but keeps those that are most memorable – “Hurry, It’s Lovely Up Here,” “He Wasn’t You,” “Melinda,” “What Did I Have that I Don’t Have,” and “Come Back to Me,” plus the title song.

The highlights of this production are the three leads, the ensemble and many elements of the production. The set is defined mainly by projections by James Morgan who establishes location through the use of post-impressionistic drawings somewhat reminiscent of Rouault’s work. The sound design by M. Florian Staab is also excellent.

Less successful is the costume design by Whitney Locher. The 1960s dresses worn by Daisy seem neither attractive nor representative of the period – I lived through it. Though Daisy is a “quirky” character, her ‘60s costumes seem on the conservative side. In addition, though the idea of having her don a 18th century gown like a dressing gown is clever, it doesn’t always work well.

Stephen Bogardus and Melissa Errico are terrific as Mark and Daisy/Melinda. It’s been too long since I’ve seen Bogardus in musical and I was once again impressed with his voice and his overall performance. His Mark shows us the uncertainty, the growing awareness, the stubbornness and much more. Errico once again impresses with her voice and the dual dimensions of the character. Both deserve to be back on Broadway in major shows.

Cudia as Melinda’s husband has a gorgeous voice for the “She Wasn’t You” but he seems overly stiff.

The result is a very nice production of a show that will never be considered a top ranked musical.

The pluses – fine performances, some very tuneful songs, and a nice production – makes this show well worth seeing.

It has been extended to Sept. 6.