Nan and the Lower Body by Jessica Dickey 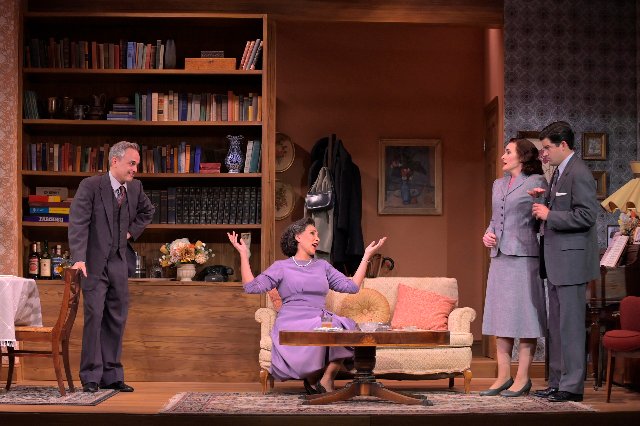 Who knew that the Pap smear was actually named after somebody?  Playwright Jessica Dickey takes us on a somewhat factual, somewhat fanciful journey that occurs at Cornell University in 1952.  Dr. George Papanicolaou has devised the landmark test for cervical cancer, and he is welcoming Nan Day to assist in his further research into women’s health issues.  While that may seem like pretty dry material for theatrical entertainment, the playwright injects sufficient conflict and complication among compelling characters, and the actors provide brilliant performances.  The result is a rousing world premiere success, full of poignancy and humor.

The play opens with Dr. Pap addressing a classroom – the audience.  The content of the lecture is unimportant, yet those brief moments absolutely hook the viewer.  There is no waiting to get involved with the story line.  In character as Dr. Pap, actor Christopher Daftsios appears unlikely to exude confidence and exhibit outstanding comic timing, but he brims with enthusiasm and turns words that would be humdrum on the page into comic thunder.

Elissa Beth Stebbins as Nan is a suitably focused and serious young woman who has the courage to know when to draw lines, even though women at that time had little leverage at work or at home.  What Dr. Pap had not realized in hiring Nan was that she has a trailing spouse (decades before that concept received critical mass).  Her husband, Ted, is a minister, and he is in a make-do situation but is looking for a permanent position.

This story touches on many themes that are as relevant today as they were in 1952, accentuated by the recent and regressive Supreme Court decision on reproductive rights.  The play is about women’s place in the world – their rights, their health, their careers, and their relationship with men.  It also concerns other groups that suffer discrimination, specifically immigrants from non-Anglo populations.  Dr. Pap relates how he suffers insults, being cast as a dirty Greek.  In his case, that disdain ties into another form of rejection.  Even scientists, who seek truth and look to push back the boundaries of knowledge, can resist breakthroughs by interlopers that don’t conform with the received wisdom.  So it is with Pap’s discovery and his colleagues’ refusal to accept him as an equal.

On the light side, the play pokes fun at society’s discomfort in speaking about clinical matters when they involve sex.  In his opening classroom lecture, Pap blurts out “Vagina, vagina, vagina” just to desensitize the students.  He is also mischievous, as he likes to see people squirm at the word, and he uses it several times in conversation with Ted, to the latter’s dismay.  Later and on separate occasions, Nan and Pap’s wife, Mache, regale Ted with the threatening word.  Rather than becoming accustomed to it, Ted’s discomfort only increases as Mache talks about her vagina being a private little place where she could hide things and nobody would know!

One interesting clash between the two male characters is the difference in their beliefs and practices concerning women’s equality and rights.  Dr. Pap argues that women are superior because humans are birthed and produced with material provided by the woman.  In practice, he shows his feminism by selecting Nan, who was the only female applicant for his assistantship.  He even suggests that she could become his partner in research if she remains at his lab.  Yet, while he says that Mache, played by a sometimes imperious and mysterious Lisa Ramirez, has completely shared with him throughout their marriage, some of her unexplained actions and vibes suggest that she maybe doesn’t feel an equal.

Ted is charmingly portrayed by Jeffrey Brian Adams as a jocular and uncommonly liberal minister for the day.  His position on women’s station says that women’s birth function should be set aside and that they should simply be considered equals.  Yet when it comes to the fork in the road on whose career takes precedence, he opts to promote his rather than Nan’s.  Of course, this begs the question – does this suggest that he doesn’t really believe in gender equality, just because he wants to advance his own career?  Clearly, one of them will have to “win,” and why shouldn’t it be him?  More broadly, how is a zero-sum game between equals resolved?

The latter part of the play is largely a soliloquy, an epilogue conducted by one of Nan’s granddaughters.  Its message is one that so many of us miss in our unmindful and self-centered youth, while our parents and grandparents are still living.  How many of us have realized too late that they witnessed history and had stories to tell about themselves and the very different world around them in the decades before?  The greater regret is that when we fail to unlock the lessons from the past, it makes us less prepared to confront the challenges of the future.

For this production, Director Giovanna Sardelli’s whole design team is female.  All of the contributions work well, but special recognition goes to Nina Ball’s scenery comprised of two detailed movable sets.  The one glitch in the performance is that the female cast voices are not strong enough to carry the house when not facing toward the audience.