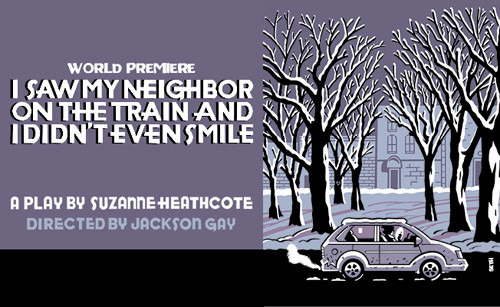 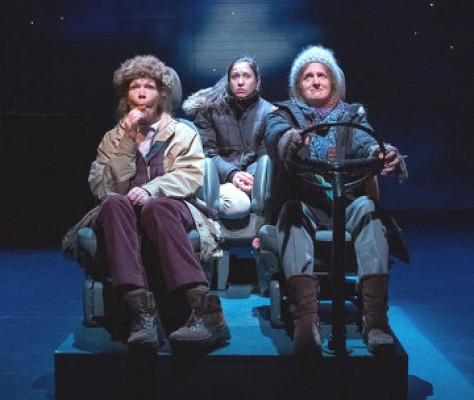 There is everything to like about a perky production of a hilarious play I Saw My Neighbor on the Train and Didn’t Even Smile by the terribly young and brilliant Susanne Heathcote having its world premiere in Stockbridge at The Unicorn Theatre.

In a bold move with impressive risk taking it is a co-production of the venerable Berkshire Theatre Festival (now merged as Berkshire Theatre Group) and the brand new, remarkably fresh and ambitious New Neighborhood.

This is the very first production by New Neighborhood and it’s a corker. Given the gale of laughter last night this is a company to keep an eye on. Here in our own back yard is the kind of fresh new direction and emerging future of theatre that one expects from Humana and the Edinburgh Fringe festivals.

But the good news this summer is that you just have to drive to Stockbridge. Kick yourself if you don’t. So far this is the most hilarious production of the season. Hey, who knew? Now the cat’s out of the bag that there’s a new kid on the block.

Most of the credit goes to the zingy writing of Heathcote, a young Brit, who amazingly has captured the sounds and textures of lower middle class, vulgate Americana. The dysfunctional family she depicts with such vim and vigor is just a few notches above trailer trash.

Her hard drinking, wild and crazy, loose lipped grandmother Daphne (Linda Gehringer) suggests that if she insists on dressing like a slut, newly arrived from California and her gonzo mother, she dress like an Illinois slut. It’s winter for cripes sake and she has next to nothing on even refusing to wear a winter coat. Arguably, it will conceal her assets.

Gazing at the intimate Unicorn stage we see the masonry wall of what appears to be an apartment building. Projections by Nicholas Hussong suggest winter and snow. Costumes by Jessica Ford have the actors geared up in parkas and boots. Baby its cold out there in this suburb of Chicago.

It’s the last place on earth that Sadie wants to be; particularly when compared to sunny California.

She has been parked there by her dad Jamie (Andrew Rothenberg) who is bound for Bali and yet another romantic marriage. His daughter and fiancé don’t get along and surely Sadie would make every effort to ruin the wedding.

This is why he prevails on his sister, the reluctant Rebecca (Keira Naughton), to baby sit for a couple of weeks. Given her very credible resistance he even offers to pay her. What, is her response, is that in addition to what you already owe me?

Their exchange in a diner was so hilarious that a female audience member was just out of control. Her bellowing laughter started even before the punch lines were delivered.

I prefer to worship in solitude which is why I no longer attend mass. But I hate it when neighbors bellow in my ears. Similarly, I had the misfortune of being next to a gaffer at S&Co. which just ruined my ability to enjoy the play.

Trust me, I was tempted to bolt out of my seat and clock her. Had there been an intermission I would have given her a piece of my mind and then some.

At the beginning of the play Daniel O’Connell walked on stage from the audience, turned and looked at us. Without a word he retreated to the rear of the stage and sat at the piano. He would play the music, composed by Ryan Kattner, for the intervals.

There was a clever use of modular elements which were rolled out to create scenes for home and kitchen, living room, a door for entrances, school, and a car. These transitions designed by Paul Whitaker were inventive and worked nicely.

Part of the plan to keep Sadie busy and out of Rebecca’s hair is to enroll her in high school. But it’s just for two weeks, his sister argues. They don’t have to know that he counters.

It turns out that in addition to hoin’ Sadie is something of a math prodigy. She finds a nerdy friend in Eric (Adam Langdon). He is clearly smitten as they do homework together. Eric tries to recruit her to the math club and team. She’s thinking about it.

When grandma encounters the young man in the house he explains that he is “not sexually active" so she is not to worry. About what is the subtext that brings the house down.

It seems that Grandma, dragging along a bottle, pops in to watch telly. But Rebecca is studying and nixes that. Why don’t you get cable she asks? But, Grandma, pissed at missing her favorite shows is on the dole and one step from rehab or the loonie bin.

Which is precisely why she is such a fun character. She chews the scenery to our utter delight.

We learn to care about Rebecca who deeply mourns the loss of her dog. But that was a year ago is the comic reminder. The pooch, however, was the only love of her spinster life.

Together in the car the teenager has a bright idea. Taking a selfie of Rebecca it is posted on line. It takes a kid to initiate this. Within seconds they are scrolling through images and descriptions of potential suitors. Rebecca is amazed particularly when responses are texted back and forth. There are many comic nuances when the lonely woman contemplates the new age technology and protocols of “hooking up.”

By the end of the evening we really care about the characters. All of the performances were superb. Gehringer’s drunken zingers were just off the wall and landed like poison darts in the Amazon jungle.

Of course, forgive me Lord for I have sinned, I just loved, loved, loved Venturi’s Sadie. She was the wonderful goo and glue that smooshed this all together.

For a brand new company this was a sophisticated and polished production. Let’s hope that New Neighborhood continues to collaborate with Berkshire Theatre Group. In making a bold move Kate Maguire played her cards right and came up a winner.

Right now this is the must see show in the Berkshires.