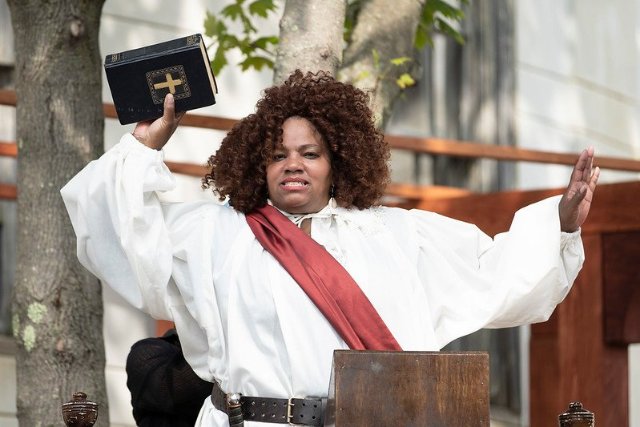 The stunning matinee production of the monologue Becoming Othello: a Black Girl’s Journey at Shakespeare &Co. this July is set outside in the Roman Garden Theater. On a broiling hot summer day the air rippled with energy as the tall, imposing actor who wrote and conceived of the play, the award-winning Debra Ann Byrd, opened with a chaotic scene at a difficult time of her life, when options seemed blocked and things were not working out for her personally or professionally.

At her wits’s end, she calls out for help and receives if from song (she has a vibrant, ecstatic range), a disembodied god-like voice, and from launching into a speech from Shakespeare’s play Othello. As if to explain her circumstances, she takes the audience on a spellbinding trip through the layers of her childhood in Spanish Harlem, her education, background and eventual entrance into theater. She dynamically twists tragic experiences again and again into gripping theater, song and recitation.

Her early years are poignantly expressed through enthusiastic bouncy child energy, where, shedding her family’s sorrows she sparkles to life on the street with her best friends. She enters the body of each age she describes, making us believe she is that child, that young bereft woman. But later, anything that can befall a vulnerable black woman/child happens to her. A broken family, a boyfriend who leaves her pregnant yet vows to kill her if she has an abortion; raising a child with a chronic, potentially fatal disease; a trusted older man who turns out to be little better than a pimp.

During the play, liberally interspersed with Shakespearean dialogue, and also humor, one starts to wonder, why Othello? Then Byrd leads us through college years with mentors who helped and believed in her, and others who did not, telling her, for instance, that she should forget Shakespeare. In a later marriage to a pastor, she falls in love with the music of the King James Bible, and studies to be a pastor herself. In her free time she acts, and sings, but without any pretension of becoming professional. Ultimately she falls in love with Shakespeare and theater.

To counter the lack of roles and opportunities for women, young people and people of color, she founds the Harlem Shakespeare Festival and her own production company, Take Wing and Soar. Countering the hard life played her early on, she rises up to become a well known Shakespearean actor, while running the Festival and company.

Meanwhile the weather, spiraling heat and dark rumblings of distant thunder forced the last half hour of the production inside. Byrd miraculously adapted to the change, just as she is transforming into Othello in the play, a role she once insisted on taking in a Harlem festival. During an on-stage costume change through which she narrates her present life, Byrd becomes Othello down to her black leggings, white tunic and expansive black velvet cape. The inclusion of Othello’s speech, (a black Moorish general beset with betrayal and despair, one of Shakespeare’s few powerful black characters) becomes more and more relevant – and sonorous. As he says, “I have made my way through more impediments/ Than twenty times your stop…Who can control his fate?” (Shakespeare, Othello, Act V, Sc ii)

Bryd’s persona grows larger and more powerful with each word she speaks, as she passionately shares the purposes of theater and art with the audience, imploring  all of us to share the truth of our lives and see the necessity of blurring lines between genres, genders and cultures – working together, finally, to save our shared life on earth. To survive, she seems to be saying, requires nothing less of us. All the raw pain of life can be transmuted through art and sharing, and that energy must make our new world. The effect of this commanding androgynous Othello and the clear emotion with which Byrd delivers her final lines underscore how weaving the elements of her own life with the arch-drama of Shakespeare is a way of saying: I am that powerful black persona.

Tina Parker, who directed Byrd in Becoming Othello, introduced the show and sat in the audience. One could feel her direct and passionate engagement with the material and with Byrd.