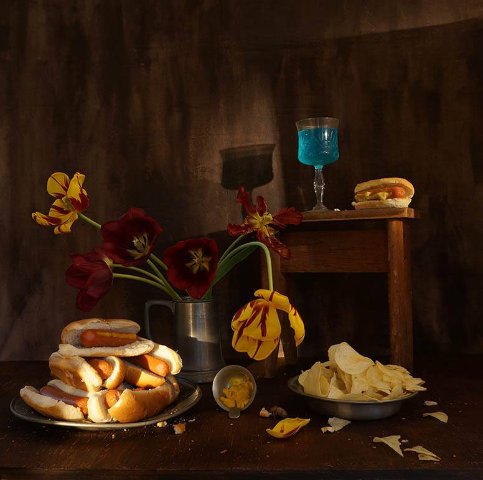 Still Life with Hot Dogs. Images courtesy of and copyright the artist. 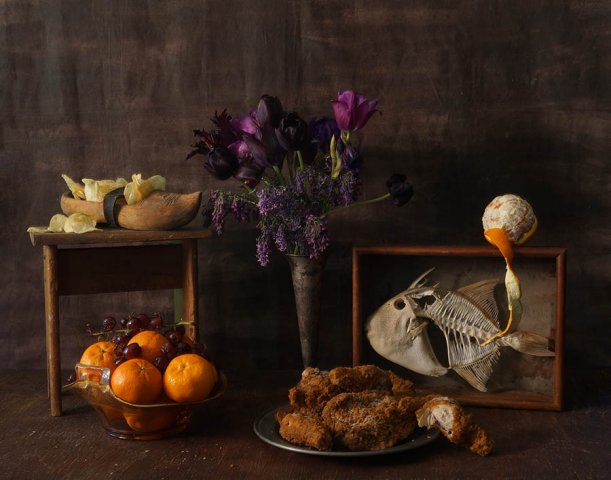 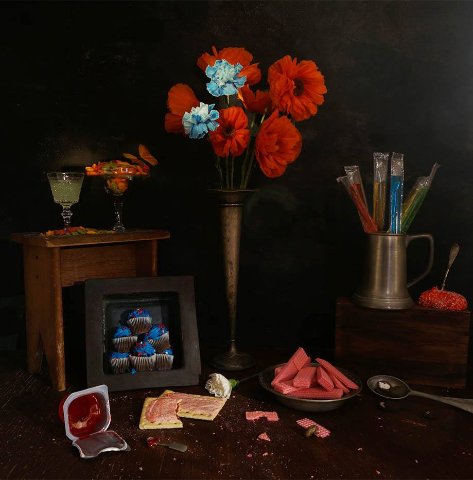 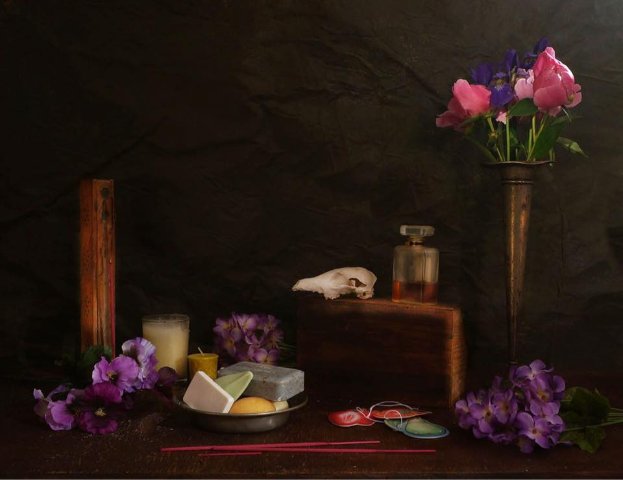 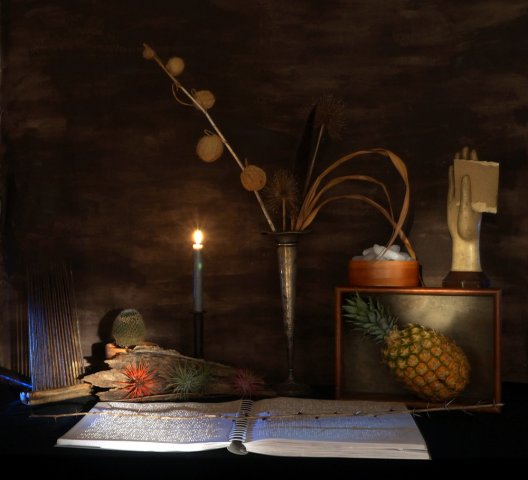 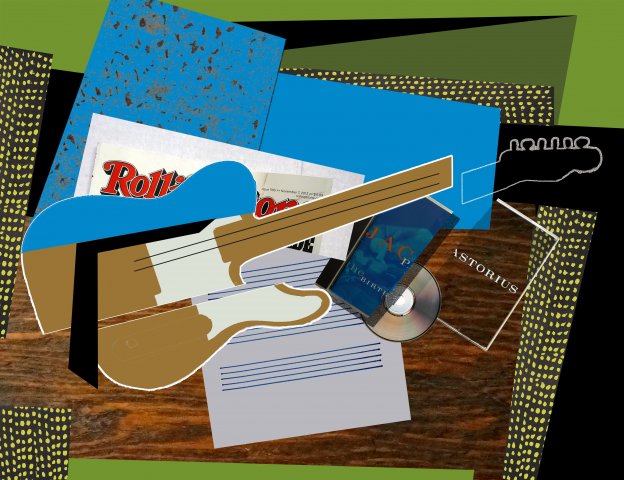 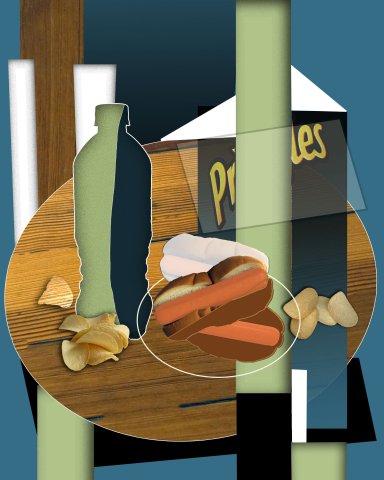 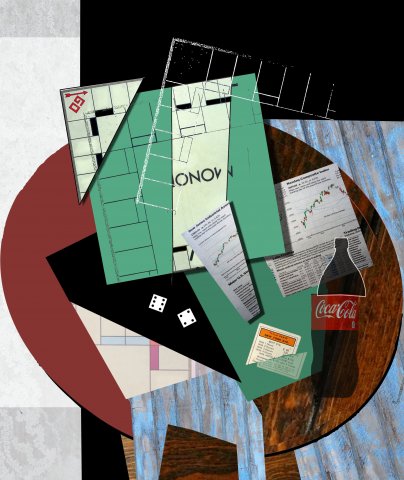 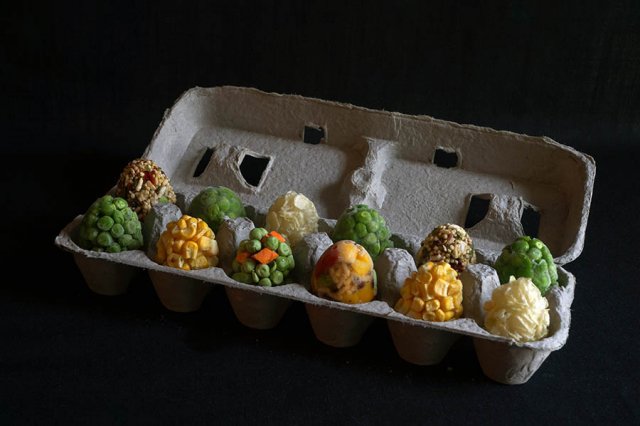 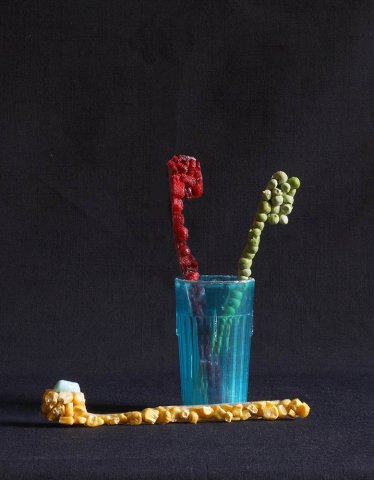 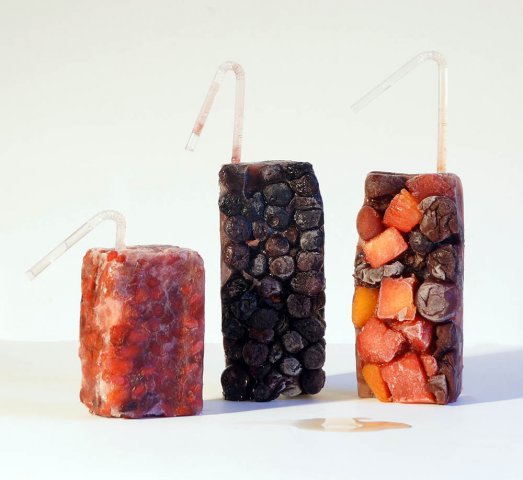 We met our friends Benno Friedman and Stephanie Blumenthal at A.J.’s Trailside Pub in Adams. They came by bikes from Pittsfield.

It had been awhile with a lot to catch up on.

She commented on being included in Art of the Hills: Visual Evidence a juried show at the Berkshire Museum in Pittsfield. As she was last year as well.

Since it sold off highlights of its collection, including two masterpieces donated to the people of the Berkshires by Norman Rockwell, The Pariah Museum of Art has been on my no fly zone.

But I was intrigued by her description of the work. She had been inspired by the Vanitas subset of 17th century Dutch still life paintings. The objects depicted human skulls, spilled glasses of wine, candles, and books signify the iconography of memento mori.

While devout Christians the popular genre paintings of that era reflected the ill gotten prosperity of the Age of Exploration. In addition to the Dutch East India Company they settled and traded in the New World. Colonists in New Amsterdam engaged in the slave trade and sold rum and muskets to the Indians. The Dutch introduced tobacco to Europe and we know the fine mess that led to.

Inspired by those works, with meticulous arrangement and placement of  objects her moralizing imagery has been upgraded to fast food. It is stunning to see it so magnificently arranged, lit and lovingly captured.

The link to her website  www.sblumenthalphotography.com proved to be captivating. I was intrigued by the pop elements of her cubist series. That is historically accurate as Picasso and Braque incorporated objects from everyday life from bottles of beer to cigarette rolling papers.

I asked for more information about the work.

She replied “Here you go!  I extended still life to include Vanitas, a sub-genre of the Still lifes, which refers to the Latin word for emptiness.

“Those paintings reminded the viewer not to get too lost in enjoying oneself with wealth and gluttony but rather to focus more on the spiritual aspects of life. Fast food is a perfect symbol of gluttony, excess and a lost connection to real food or at the very least, where it comes from.

By accident, I came upon a book about the original Dutch Still Life genre, Vanitas, Latin for emptiness or vanity. The more I read about this genre the more it seemed to be the perfect background for junk food.

As you know, the “still-life” became popular in the 17th century during the Protestant Reformation during which the depiction of religious subjects was forbidden. At the same time, Amsterdam became the largest trading port in the world, bringing to market an abundance of goods never before available to the local consumers. The Vanitas paintings reminded the viewer not to get too lost in enjoying oneself with wealth and gluttony but rather to focus more on the spiritual aspects of life. Fast food seemed to me to be a usable metaphor for gluttony, excess and a lost connection by local consumers to real food.

After finishing the Dutch Still Life series, I decided to try to integrate contemporary food into another genre, so I picked cubism. Rather than a softly lit realistic rendering of carefully arranged objects, I flattened and fragmented items. Instead of creating a setting/arrangement and photographing it, I photographed the items separately and reassembled them. In this series, rather than making fast food beautiful, my interest shifted to taking mundane objects (a Coca Cola bottle or Monopoly set), transforming them using Cubist convention.

My son had left sushi in his car overnight and since it was in the middle of winter, the sushi had frozen into a block of food. It reminded me of an Irving Penn photograph of arranged blocks of frozen food, inspiring this series. The juice boxes came first, the juice’s flavor dictating the choice of fruit to be frozen.

Charles Giuliano Do you have more fast food images? I only found two on your site.

Stephanie Blumenthal There are 3: hot dogs, fried chicken, and hamburgers.

CG The frozen food inventions are wonderful as is the cubism.

CG What was your training as an artist?

SB I grew up in a family of artists; my father painted and did monoprints and my mother was a sculptor. I was a sculpture major in college but didn't take it seriously.

CG How and when did you become a graphic artist?

SB Around 1975. My first job out of college was at an advertising agency; I was an assistant to the Art Directors. It was there that I heard about graphic design. Intrigued, I started taking classes at SVA (School of Visual Arts) in mechanicals and typography.  After that I basically faked it as a graphic designer and got employed as a designer. I was very lucky and worked with some wonderful people, such as Maira Kalman at M & Co. and later as a book designer at Random House.

CG When and how did it evolve into fine arts work? How did the formal setups for the still lifes come about?

SB My favorite genre in art is surrealism. Many of my series deal with taking elements out of their natural environments, such as the flower, vine and still life series.  I had played with the idea of making fast food look beautiful and the Dutch Still Lifes came to mind. For props, I used items that Benno's mother had at her antique store and painted my background on canvas. Since I had never taken any photography classes I Googled lessons on lightning. Luckily Benno had kept his 30 year old photographic equipment which I was able to use.

CG I see a lot of graphic design in the cubist series. What programs have you used to create the images?

CG What was the inspiration for the frozen food eggs and toothbrush?

SB My son had left his sushi in his car overnight and since it was in the middle of winter, the sushi had frozen into a block of food. It reminded me of an Irving Penn photograph and I decided to play with it.

CG Where the work may be seen

SB On my website. The vines and spaces/interiors are on Carrie Haddad's website. https://www.carriehaddadgallery.com/ . The gallery is located in Hudson New York

CG Thanks for sharing this work with us.