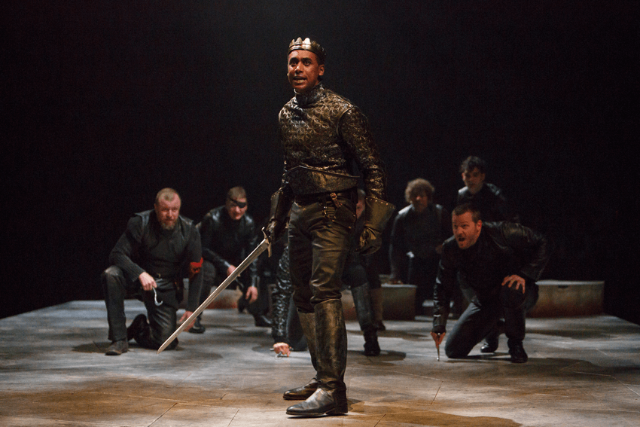 This monstrous project has so many rich rewards for an audience that I suppose that it really ought to be experienced by those attending Canada’s Stratford Festival this season.  But there are also so many problems inherent in its staging and flaws in its current decisions and compromises that I don’t think this a viable continuing or revivable dramatic creation.  Essentially, the idea is to stage Shakespeare’s History plays from Richard II through Henry V with the same, large, varied cast in two segments of two plays each, cut and combined.  Most audiences seem to prefer seeing them all together in two segments called “The Breath of Kings  Rebellion” – Shakespeare’s Richard II and Henry IV, Part 1; and the second segment, “The Breath of Kings  Redemption “ – Shakespeare’s Henry IV, Part 2 and Henry V.  I saw them scheduled that way in a matinee and evening performance. They each run about three hours, including an intermission, so they are a good deal more than merely trimmed. If these plays were uncut, and without any intermission, the four segments would run for more than ten hours.

Even a great ensemble like Stratford’s would inevitably have some problems in casting these famous roles, and this eccentric experiment adds the inventive oddity of not just Nontraditional casting but inconsistent  casting: in one play a fearsome male antagonist is a well-known actor: in another he  becomes a woman. In what’s left of Richard II, the King’s supporters, the Duke of Norfolk, the Bishop of Carlisle, the Archbishop of York, the Earl of Salisbury, Sir John Bushy, and Sir Stephen Scroop are all played by women.  So the questions about whether Richard might have been a tad effeminate seem here to be hilariously obtuse.   And since I know some very, very gifted and versatile male Stratford actors who are feeling rather underused this season, the notion of limited resources causing these odd castings is unconvincing.

And yet there are moments in this peculiar sampling from Richard II  that are thrillingly memorable.  Tom Rooney is both eccentrically old and foolish as Richard, and yet he has heartbreaking moments of nobility and wit and poetic intellect.  Richard’s great speeches, like the famous, “For God’s sake let us sit upon the ground/ And tell sad stories of the death of kings…” get delivery from Rooney that makes me yearn for a recording.  Graham Abbey, who imagined, created, and put this madness together, builds his Bolingbroke from a barely controlled ambitious fury to a haunting, regretful death scene in the Henry IV Part 2 segment. One of the many oddities in these plays offbeat costumes and make-up is that Abbey’s physically weak and anguished dying king appears to have the best-looking chest of all the muscular actors in that war-story.

But in these two plays his Henry IV is irresistibly becoming a king and yet never entirely secure in the rightness of his victories. Araya Mengesche is a good-looking Prince Hal, but not one who convincingly enjoys his raucous misbehavior with the rambunctious crew at the Boar’s Head tavern.  He’s better at princely than playboy. Geraint Wyn Davies is a slightly more controlled – and decidedly more sharp-witted – Falstaff than most. But he gives us the essence of the great comic character and, as usual loses himself in the role.  I don’t think that there is an acting, singing, physically challenging role that Wyn Davies can’t perform masterfully. And we get Michelle Giroux moving from Richard’s elegant Queen to Falstaff’s raunchy Doll Tearsheet.  I’m growing tired of the rehashed high-jinks of Falstaff and crew at the long opening of Henry IV, Part 2, so the vitality of Henry IV Part 1, contrasted with the tragedy and poetry of Richard II seems to me to make this opening pair the stronger half of this compilation.