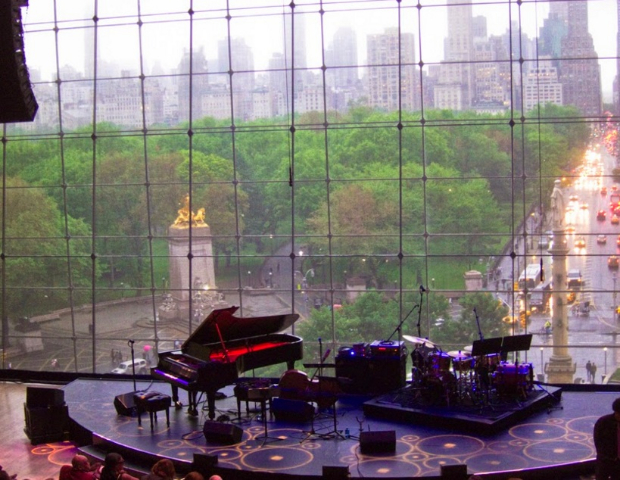 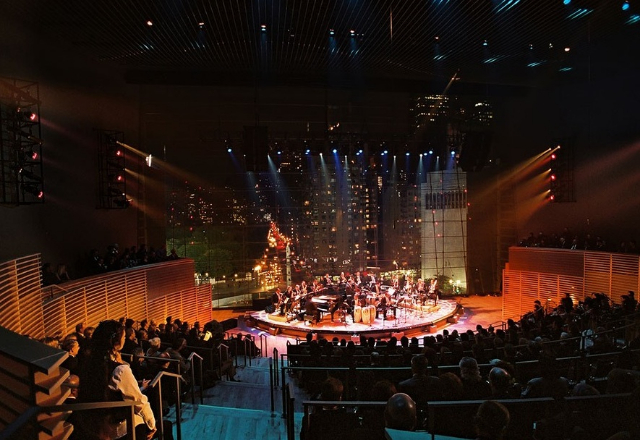 Reich had this view. 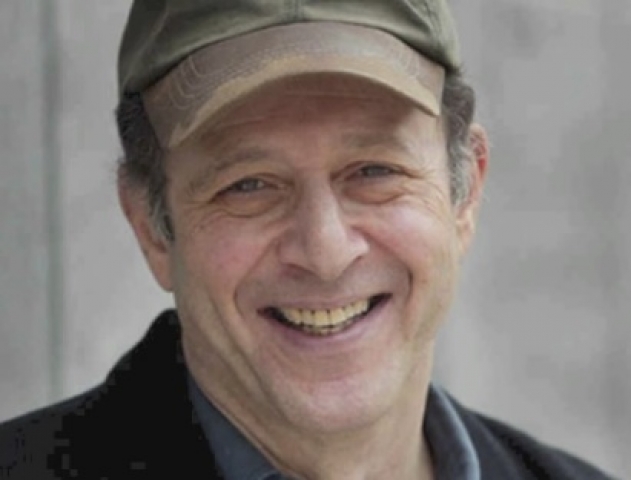 Standing at the top of the amphitheatre which is the Appel Room, the view is jaw-dropping.  In architect Rafael Viñoly's design, a 50 foot by 83 foot window opens over Columbus Circle, and Central Park South extending east as 59th Street.  The only comparable concert area I've been in is the Santa Fe Opera, where you walk into the rear of the theatre designed by James Stewart Polshek to look out on to the sun-setting over the Jemez mountaintops.

Composer Steve Reich is tucked into a rear row seat at the Appel, his baseball cap jauntily set, his athletic frame belying his 80 years.  His compositions deserve this magnificent setting.  Performances by Ensemble Signal and the JACK Quartet suit the space.

A bluish screen drops over the window just before the concert begins. White and blue lights are slashed horizontally across the curtain.  Who knows when one of the cellists in the second row dyed her fingernails blue to match the setting.

It is often said that minimal music does not depend on conceptions and their communication, but rather actualization.  In Reich, concepts inform pieces and the titles are the cue.  WTC 9/11 and Different Trains are compositions prompted by memory.  People may not take long distance train rides any longer.  The familiar "All Aboard" cry, which Reich uses as part of the pre-recorded tape which accompanies the live performance, has long since disappeared along with the old Pullman porters.

Reich interviewed a porter who would have been around when he traveled with his governess from New York, where he was living with this lawyer Dad to visit his mother, a singer and lyricist living in Los Angeles.

Also on the tape are recorded conversations with his governess, her recollections of the trips she and Reich took.  If Reich regards language as a musical instrument, and replicates the sounds of instruments, their pulse and rhythms. when he composes the instrumental parts, perhaps minimalist music does not depend on content.

Yet it is difficult not be moved by the journey of a small boy to visit his often absent mother.  Are we reading into music the rush of beauty toward the end of the piece? Are we wrong to imagine a son being wrapped in his mother's arms?

JACK is a quartet known for its superb performances of contemporary music.  Whether or not the cellist is the anchor for this group, he was the most clearly intent on keeping a rhythm and making sure he was in precisely the right place.

In the first part of the program, Ensemble Signal and the JACK quartet joined forces for WTC 9/11 and Triple Quartet.

Again, for anyone who was in New York on that cloudless blue perfectly temperatured day, the title of the piece floods the memory. Reich himself has written about being in Vermont and worrying about his son, daughter-in-law and grandchild who lived in lower Manhattan. He allows the echoes of trains carting Jews off to extinction in the Second World War and suggests a future in the phrase, WTC, Worlds To Come.

The composition opens with real tapes from Air Traffic Control and the New York City fire department, the voices of medical personnel who waited for bodies at Bellevue are again interwoven with the instrumental portion of the piece.

Like Different Trains, instrumentalists have to decide between following the rhythms of of the voices and doing something that is analogous.

Triple Quartet stands on its own.  Originally commissioned by the Kronos Quartet, recorded tapes of two quartets were to be played with the live portion.  Here we were treated to three live quartets.

As Reich was beginning to write the piece, he commented:  "What are the roles of quartets?  Are we dealing with all the fiddles and then all the violas together?  Then, how will they be seated?...The more tightly interrelated they are, the closer they should sit..."  He begins to compose:  "I feel a tug on the line.  I think I've got a good fish here and I've got to reel it in."  Triple Quartet turned into a wonderful piece as is so much of Reich's work.