At Steppenwolf in Chicago 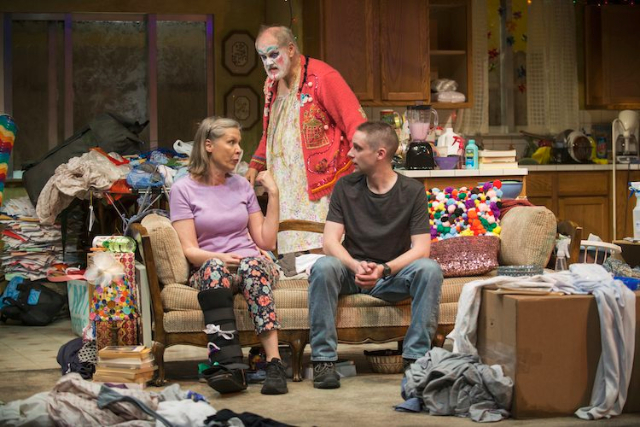 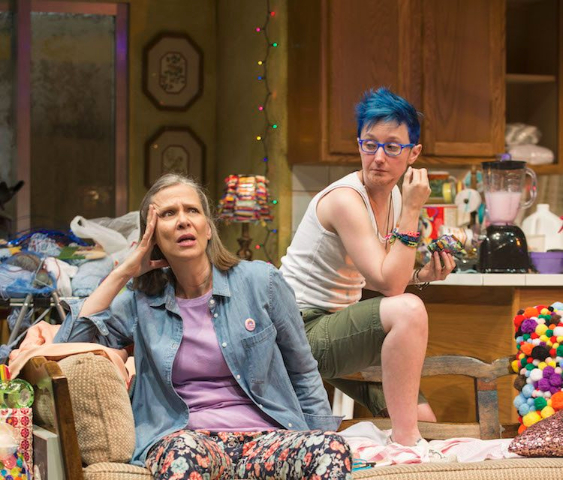 On the surface and in all its promotional materials, Steppenwolf Theatre’s startling new production of Taylor Mac’s Hir (pronounced “here”) is about transgender people, and the state of being nonbinary. But there are many layers and levels of meanings in this intensely contemporary piece of theater. They tend to overwhelm the trans/nonbinary theme. The madness is directed adroitly by Hallie Gordon.

I hardly know where to start in explaining it, just as I hardly knew what to think after seeing the play. I had to let my thoughts germinate overnight. Among other things, we have order vs. chaos, tradition vs. revolution, parental and spousal abuse, patriarchal privilege, marital revenge, air-conditioning wars, spray bottle torture, a shadow puppet-show, and teenage gender dysphoria. (That may not be the right term.)

Hir is a family story, a chaotic kitchen-sink story. Playwright Mac describes it as absurd realism, with a simple plot: The prodigal son returns home from the war and finds nothing is as it was when he left. Isaac (Tyler Olwin) has been away for three years, working on a mortuary crew in . He’s learned to respect the dead and give proper care for body parts. He was dishonorably discharged for drug use and gets a PTSD reaction to the blender.

He walks into his old family home, a tract home in ’s brutally hot central valley and finds the front door is blocked with stuff. Paige (Amy Morton), his mother, who is reeducating herself for the modern era, has deconstructed the home and family. His father Arnold (Francis Guinan in a truly brave performance), who was a cruel husband (and ordered his wife around, calling her “Rib”) has had a stroke and is nearly speechless. Paige feeds him estrogen pills in a blender shake. He wears a nightgown, sparkly makeup and a fright wig. His sister Max (Em Grosland) isn’t his sister any more. Ze is now non-binary, gender queer and uses the pronouns ze and hir. Ze is taking hormones, is growing a beard and says ze has a dick. (Paige points out it’s an enlarged clitoris.)

Soon Isaac must have pronoun training. Paige brings out a display board, which Arnie holds up, showing the correct nonbinary gender terminology: LGBTTSQQIAA. Ze and hir instead of he/she/his/her etc.

Paige and Max leave for a cultural day in the city but Isaac refuses to go. He tries to restore order to his old home. When the curtain opens for act two, he has sorted through piles of trash, folded laundry, dressed his father in a man’s shirt, and is cooking chicken for dinner.

When Paige and Max return, Isaac finds that the change he needs isn’t acceptable.

When you enter Steppenwolf’s downstairs theater, the stage is curtained in a traditional way. This is odd because Steppenwolf rarely uses a curtain; you usually see the opening scene setup and have a few moments to admire (or critique) the scene design. For Hir, Steppenwolf goes ironic—curtaining the stage with a full, deep red curtain and sky blue swoopy draperies across the top. The word “HIR” is projected on the red curtain. Hir not only breaks apart gender identity, it smashes tradition to bits.

Steppenwolf is justifiably famous for its ensemble performances and Hir is yet another example. All four performers are superb; Morton and Guinan are Steppenwolf regulars; Olwin is an experienced actor and Grosland makes his debut in Hir.

Collette Pollard gets the credit for the scenic design resulting in Disorder in the House. When the red curtain opens, it reveals the madhouse. Jenny Maddis handled costume design. Richard Woodbury created original music and sound design, while lighting design is by Ann G. Wrightson.

Taylor Mac is a multitalented performer with many acting, writing, directing and other credits. Hir was named to the New York Times’ 2015 list of the 10 best plays.

Did I like the play? You have the right to ask. It was not always pleasant to watch throughout the two-hour production. But I don’t believe it’s the mission of theater to generate pleasure. Hir is funny, sad and brutal. Now in retrospect, I believe that it’s brilliant. A brilliant piece of writing by Taylor Mac and a stunning job of acting and direction by the cast and director Gordon. I want to see it again. So if you’re a little uncomfortable during the first act, persevere. Hir is a rewarding piece of theater. Thought-provoking is an understatement.