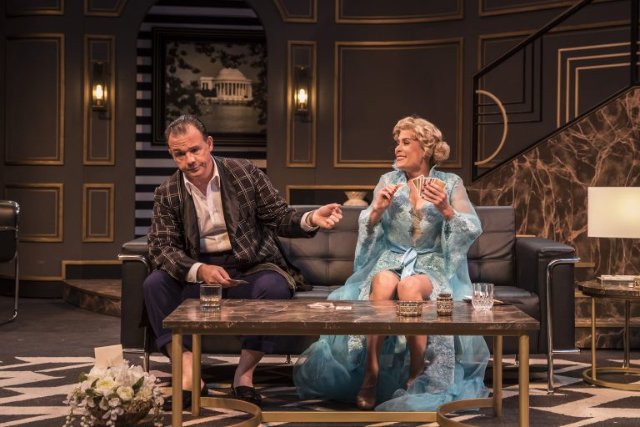 To economize, note that all of the plays critiqued below can be recommended, as APT’s productions meet standards expected by serious Bay Area theater goers. Emphasizing the company’s philosophy that words reign supreme, staging may be appropriately spare in some productions. Outdoor performances (all below except Blood Knot) are given without mics, but the natural acoustics fully envelop the 1,100 seat audience with full resonance. Acting of lead roles is consistently strong, including those in all of the photos in this article. Most supporting characterizations are equally fine.

For those who have seen the Judy Holiday and Brodrick Crawford movie version of Garson Kanin’s comedy Born Yesterday, it may be hard to imagine different realizations of the main characters. APT’s version conforms, offering a squeaky, ditsy Billie and a rough, gruff Brock.

As a production, this one hits all the marks. But a significant aspect of one’s appreciating a play may sometimes be the context of the experience – perhaps a memorable venue or the mood that one is in. This play takes on different coloration now than it would have two years ago or more. And although the main arc is Billie’s aspiration to become something more when given the chance, the revelations about Brock weigh more heavily. How can one not see him as a Trumpian character? Billie is a trophy accessory to be brilliantly adorned as a testament to Brock’s wealth. Even though he may have feelings for Billie, his actions are demeaning. Never are his interactions with others opportunities to connect with humanity. Each is a contest to be won, an opponent to be crushed. Dominance and accumulation of wealth and power are the only motivations. In earlier viewings, Brock may have been perceived simply as a brutish exemplar. Now, and through APT’s depiction, he forebodes a frightening force of historic proportions.

Playwright Athol Fugad’s intimate plays about the blatant, but particularly, the insidious aspects of apartheid in the South Africa of the late 20th century deeply sadden. In Blood Knot, he confines the discourse to two brothers, portrayed here with such consummate skill that the viewer will constantly wonder if beneath the civility an eruption between the two is about to occur.

Zac has child-like charm but childish thoughts and behaviors. Morris is dour and thoughtful, and significantly, can pass for white. The value of whiteness in the time of the play, the 1960s, is palpable, not only in providing possible access to a more comfortable life in a privileged community, but even within the black community. Indeed, tension between the two men from their earliest ages stemmed from Zac’s belief that Morris was preferred by their mother because he was lighter. But in a twist of roles, Morris can now be perceived as servant to Zac.

Presently, they live together in what is staged as a poor but dignified existence, in shabby but neat and clean housing. Their participation in fantasy as children leads them to engage in a pen pal correspondence that may jeopardize their relationship with one another and their very safety. Blood Knot unfolds at an agonizing pace but redeems itself with gripping apprehension of what disaster may lie ahead for two brothers, each wanting more, but wanting different things to be accomplished in different ways.

As is typical in Shakespeare’s comedies, the Bard explores ambition, power, envy, love, identity, and friendship. And although these themes have been central throughout the centuries, the callous self-interest of the powerful seems to resonate particularly in the present. One of Shakespeare’s most beloved plays, one distinction of As You Like It is that he wrote into it one of his most compelling, complex, and dominant female roles, Rosalind.

The play examines the relationships of brothers, lovers, and friends. The action is triggered by two sets of brother against brother. In one, a duke steals power and wealth by exiling his brother from court, while in the younger generation, an older brother suppresses his sibling to render him uneducated and without means. Shakespeare also depicts the strength of true friendship between two remarkable young women on a journey of self-discovery. Rosalind, who has been banished by the evil Duke is courageously joined by Celia, her cousin and daughter to the Duke.

As with many Shakespeare comedies, the suspension of disbelief meter has to be turned way up, as Rosalind will take on the disguise of a boy and not be discovered by any who know her. Along the way, we will be coaxed to ask, what does it mean to love? How is it manifested? Are there differences in power between men and women? Stay tuned and compare the themes with a comedy from the following century – The Recruiting Officer.

Written in 1706 by George Farquhar, this play was lavished with many firsts and mosts and celebrated as the most popular play of the 18th century. Yet it is largely forgotten today. Perhaps because of the respect for Shakespeare and his canon of well-received comedies, the later Restoration comedies that fill the same niche have not received their due.

One way to look at this play is through the lens of the saying “all’s fair in love and war.” Indeed, the analogies run deep between the recruiting of soldiers and the wooing of lovers, and in The Recruiting Officer, the actions run parallel as well.

ATP’s charming production stands tall alongside As You Like It. Replete with a Shakespearian-like idiom, it sparkles with humor, arouses with partner and loyalty switching, and titillates with gender bending disguises and action. These devices often belie the serious themes that underscore the humor. In this case, what distinguishes masculinity and femininity both within and between individuals? How is adultery defined? What should be the consequences of positive or negative behavior? What are reasonable rules in love and war? Is deception a fair strategy – for instance, inveigling prospects to leave family and responsibilities to enlist in military engagements? These matters are well exploited in a humorous manner.