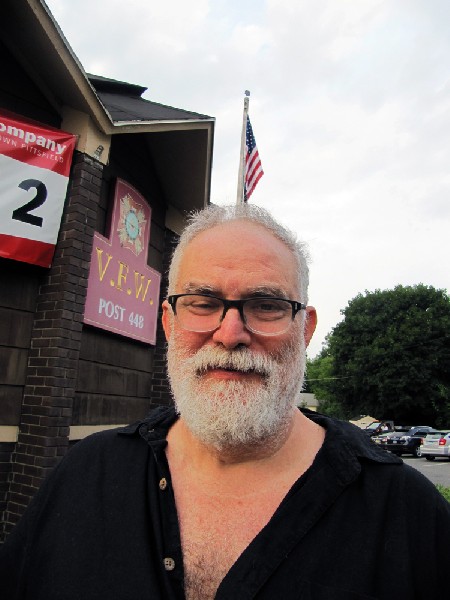 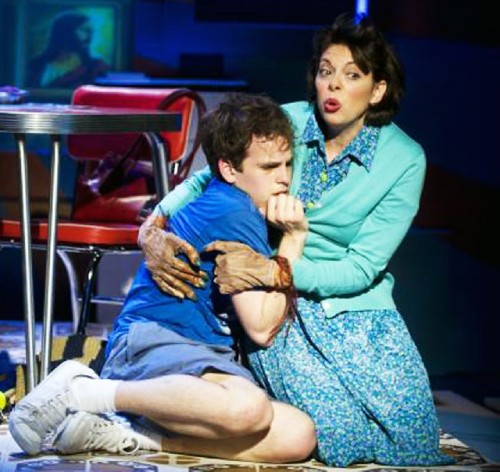 Sam and his Mom discuss and sing about farting. Kevin Sprague photos. 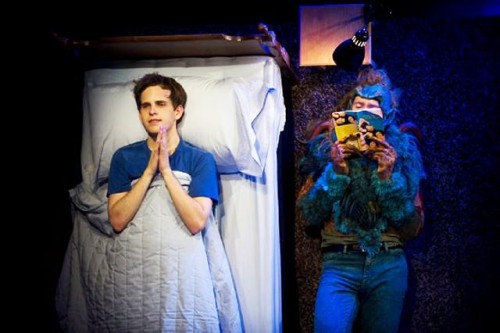 There are monsters under the bed. 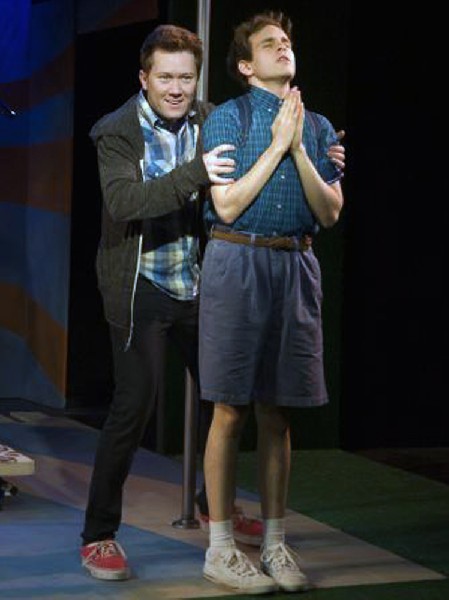 Sam and the narrator known as Me. 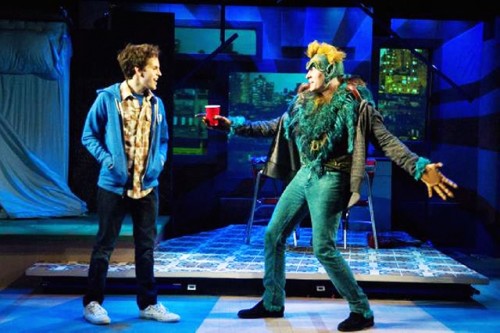 Mormonism traces its origins to the Church of Christ founded by Joseph Smith, Jr. on April 6, 1830 in Western New York during a period of religious revival known as the Second Great Awakening. Roughly a decade earlier, the young Joseph was seeking a remission of his sins. Confused by the doctrines of competing denominations, he went into a grove of trees to pray about which church to join. During his prayer, Joseph claimed that the Lord appeared to him in a "pillar of light" and instructed him not to join any of the churches. A few years later Smith claimed that an angel directed him to a nearby hillside where indigenous American prophets had buried a book written on golden plates. Smith claimed to have translated the book, and in March 1830 he published the Book of Mormon, named after Mormon, the ancient prophet-historian who compiled the book.

Mormons have not only their own state, Utah, but a state of mind.

You may have seen their young men during an obligatory period of missionary work proselytizing in your neighborhood. It is easy to spot them in pairs or small groups wearing the sensible, straight uniform of white shirts, boring ties, name tags identifying them as “Brother…” and back packs with church literature.

The church bans alcoholic beverages, tobacco, coffee, and tea. Salvation is obtainable only through marriage sanctified by the church. People of color, the Children of Cain, and gays have no hope of salvation. Early on they practiced polygamy and still do by some renegades in rural Utah.

There are Mormons all over America but in Utah, as we are informed in a new musical Mormons Mothers and Monsters at Barrington Stage Company, there are so many you can see them from space. The protagonist Mormon (Taylor Tensch) is a fragile, scared, messed up kid growing up without any other Moron kids to talk to in Pittsburgh. In Salt Lake City, we assume, he would be like any other messed up kids questioning their beliefs and sexual identity, but with a whole lot more friends.

We are never quite sure why Mom (Jill Abramovitz) ended up in Pittsburgh. Or failed to flee back to Mecca after the first of several divorces. A definite no no punctuated in song by “D.I.V.O.R.C.E.” Every time she divorces the kid is served a treat, a bowl of ice cream, and a trick “Daddy doesn’t love us any more.”

There is a parade of new dads (played by Adam Monley). The boy is first named Samuel Liam Doherty, then Samuel Liam Wood and finally, Samuel Liam Salmond. That last name, Salmond, is also that of the playwright. Oh good grief, get out, this is all like, autobiographical? It is, who would have thunk it, the, like, actual story of him, you know, growing up gay and stuff, a Mormon, in, let me get this straight, Pittsburgh?

Like, you know what I mean, why does, like evvvvverrrry young recent grad of theatre writing school, think that their messed up young life, and coming out, deserves to be set on stage with music and dance.

As a member of the audience who is straight, not a Mormon, and has passed through Pittsburg, just what is there on stage for me to care about and identify with? Give me a break.

During the past season we have witnessed both the sublime and ridiculous. There have been months and months of previews and fiascos followed by disasters (a few actors ending up in hospitals) for the still born birth of Spiderman with music by rock stars Bono and The Edge. Friggin awful by most accounts. My dentist liked it.

The sublime, get this, is The Book of Mormon. Oh my God, Oh My God, OMG.

Unfortunately, here we go again and I break my promise, forgive me Lord, this feisty little work-shopped production of Mormons Mothers and Monsters has only its faith in common with the Broadway smash. After a ton of Tonys tickets are wicked hard to come by.

Let’s try to focus. Believe me, that was a serious challenge last night during a one act of ninety minutes that dragged on forever. Boy, was I ever ready for the finale.

Actually, the evening started with great promise. The opening number “Mormons, Mothers and Monsters” was upbeat and fun. Here and there that energy and freshness kicked in again but despite the incredible enthusiasm of the cast, really terrific overall, I sank down ever deeper into my seat.

The little Mormon kid was stupid or naïve beyond belief. He has come home to Mom (Jill Abramovitz) with a troubling tale of farting. It makes him wonder about his body and its functions. This will of course conflate to later, deeper issues of sexual identity. Mom, good little Mormon that she is, has the perfect answer, and song of course, for his questions about flatulence. “God Made Everything Good.”

It seems that God, in His infinite wisdom, intended for us to emit S.B.D's. Breaking wind is a part of His divine plan. That’s good to know.

With gas dispelled, what a relief, we got into the serious stuff. Like the monster/ devil that sleeps under our bed. Yeah, I resemble that. By the end of the play everyone is a monster and even Mom has those creepy, scary scaly hands.

While we witness the trajectory of the boy becoming a man that is shadowed by an alter ego/ narrator, and ersatz one man Greek chorus, who fills us in with asides. Me, yes that’s what he is known as, how original, is played by Stanley Bahorek. He appears to be a better actor and singer than the script suggests.

There are some pretty good songs such as “Do the Same as Me” and “Hump the Pole.” My favorite however was the hilarious “BYU for Me.” Once Sam has reached college age he is destined for Brigham Young University. There to bond with other clean cut Mormon kids, and find a nice little Schickse with whom to make lots of little Mormons.

This over the top number is punctuated with Mom and Dad du jour (Adam Monley) waving pom poms and cheering madly. Give me a B. Give me a Y. Give me a U.

Almost. Sam opts for N.Y.U. which is just one letter off from B.Y.U. There he is more likely to be interested in the Goys than the Goils. Of course there is not a prayer that he will get to Mormon heaven. Too many books to read. Who has time? By now Sam is an atheist as if that solves everything.

In the workshop format of this production there is the assumption that more time and effort will go into this musical. Clearly, it is not ready for prime time. Nor, arguably, was that the intention. The tougher question is whether the premise warrants the effort. With a lot of sweat equity it might be ready for Off Broadway. In New York there are enough people who would identify with its niche themes.

Of course, a polished production would be a smash hit in Salt Lake City. But it is doubtful that the Elders would let that happen.