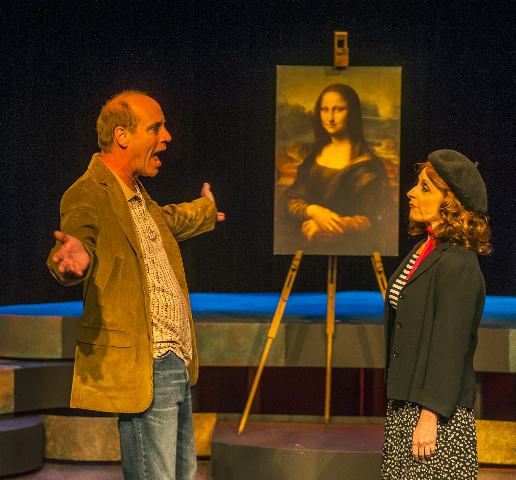 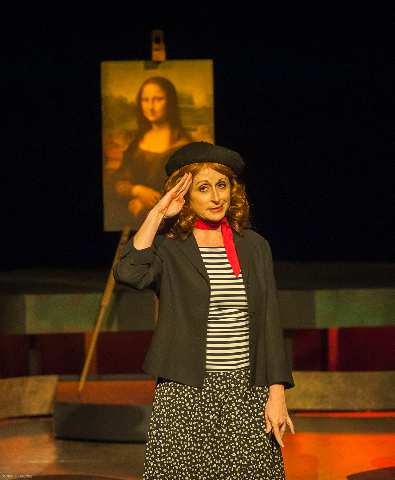 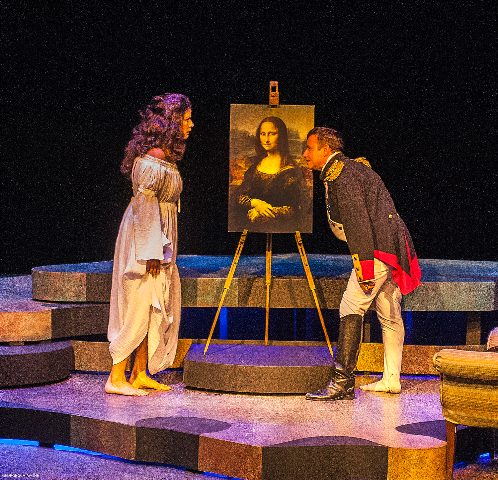 You hardly have to brush up on your art history to enjoy award-winning playwright Michael McKeever’s new play Finding Mona Lisa.

McKeever takes us on a fun-filled trip featuring stops in France and Italy and time periods such as the 1500s (when the painting was reportedly created by Leonardo Da Vinci) and early 1900s to relate the history of one of the world’s most famous paintings. It has pervaded popular culture in a variety of media; American singer Nat King Cole wrote “Are you warm, are you real, Mona Lisa? Or just a cold and lonely, lovely work of art?”

Your chance to buckle up and tag along for the inaugural ride full of colorful characters, quirky, humorous dialogue and a surprising revelation ends Aug. 13. That is when the final performance of the world premiere of McKeever’s play will end Coral Gables, Fla.-based Actors’ Playhouse at the Miracle Theatre’s 2016-17 season. The multi-award-winning McKeever’s play might trace the history of the Mona Lisa, but the piece isn’t a history lesson. Nor is it filled with art-related jargon. In fact, in one of the scenes, a scientist explaining her study of the Mona Lisa defines a term used in the art world.

What constitutes “great art?” How can a work of art affect someone? How accessible is top-notch art these days to not only the wealthy, powerful and connected, but the masses? What runs through an artist’s mind as he or she begins the creative process?

These are some of the questions audiences will likely walk away pondering once they’ve stopped laughing from McKeever’s humorous dialogue.

The play’s title has several meanings. On the one hand, the characters are finding ways to describe what makes the figure of Mona Lisa so appealing to so many. The play also tries to identify the woman with the enigmatic smile who sat for the painting. Historical accuracy, though, isn’t the most important issue here.

Another possible explanation for the title has to do with the fact that someone once stole the painting from the Louvre Museum in France. What happened to it? McKeever, rather than writing a detective story, answers that question. That, however, doesn’t make the play any less appealing. That’s because the characters, some of them real-life figures, are colorful folks who are a delight to watch, even if they’re not painted with the broadest of brushstrokes by the playwright. But crafting well-developed characters doesn’t appear to be McKeever’s aim in this play. It’s largely escapist fare with scenes taking place in multiple time periods, at times simultaneously (although the characters from their respective time period don’t acknowledge each other.)

Those time periods are brought to life mainly through Ellis Tillman’s colorful, character-defining, period-appropriate costumes. Their appealing appearance is enough to keep you riveted to the stage.

Set designer Gene Seyffer honors McKeever’s wishes. The playwright, in a note in the script, asked for minimal scenery so a production could focus on the painting. In Actors’ Playhouse’s intimate upstairs Balcony Theatre, the artwork sits mostly at the center of the stage, with tables and chairs standing in for different locales. The set’s anchor is a series of platforms arranged in a meandering fashion.

The simple, single set allows for smooth, quick transitions between scenes, which take place on various platforms. A downside to this is the set lacks variety and can make the play seem static.

Similarly, lighting designer Eric Nelson’s design is too homogenous, lacking variety. He bathes the stage almost entirely in blue, which is appropriate for certain scenes. The color lends the proceedings a cool, soft, seductive atmosphere that’s appropriate; the Mona Lisa, after all, has seduced multitudes over the years, and not necessarily in a sexual manner. One character comes close to having a sexual-like relationship with the figure in the painting without any accompanying risqué material. A man named Ugo (an intense, practically mad Daniel Capote who, like the other five actors, plays multiple roles),confesses to throwing a rock at the statue.

Why? Well, it seems the statue’s subject came to life for him and was paying more attention to other men after establishing a good relationship with Ugo. Art can affect us in a variety of ways, some of them bordering on the bizarre, McKeever seems to say.

To Dr. Lange, a scientist (played with a dignified, professorial air by Irene Adjan), the Mona Lisa is mostly an object to look at objectively, without romantic or emotional feelings. McKeever nicely contrasts Ugo and Lange’s point of view in the opening scene.

Adjan, a multi-award-winning Actors’ Playhouse regular, is chameleon-like, appearing vastly different in each of her roles. She convincingly conveys the hard-to-contain enthusiasm of an art fangirl type in one of her roles, while imbuing a rich art collector with a glamorous aura befitting a socialite.

There’s plenty of other strong acting work, from Chaz Mena’s commanding, forceful Napolean to Daniel Copte’s sly-as-a-snake bad guy who masterminds the Mona Lisa’s theft. These actors, under director David Arisco’s attention to detail, find nuance in their comic portrayals, and their timing is spot-on.

Anna Lise Jensen turns an employee in the country’s cultural world into a bit of a caricature. However, her playful, silly, teasing portrayal contrasts nicely with Tom Wahl’s nervous, business-like demeanor as an official tasked with bringing the Mona Lisa to the United States from France.

It’s been some 500 years since Da Vinci created his masterwork. Here’s hoping theaters across the globe will find McKeever’s play and give it a long life in the theater – just as the Mona Lisa has enjoyed immense popularity for so long world-wide.

Finding Mona Lisa continues its world premiere production through Aug. 13 at Actors’ Playhouse at the  Miracle Theatre, 280 Miracle Mile, Coral Gables. Performances are at 8 p.m. Wednesday through Saturday and 3 p.m. Sunday. For ticket prices and to purchase tickets, call (305) 444-9293 or visit www.actorsplayhouse.org.