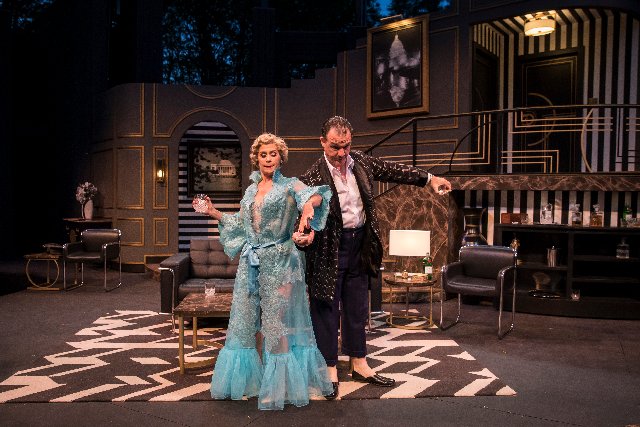 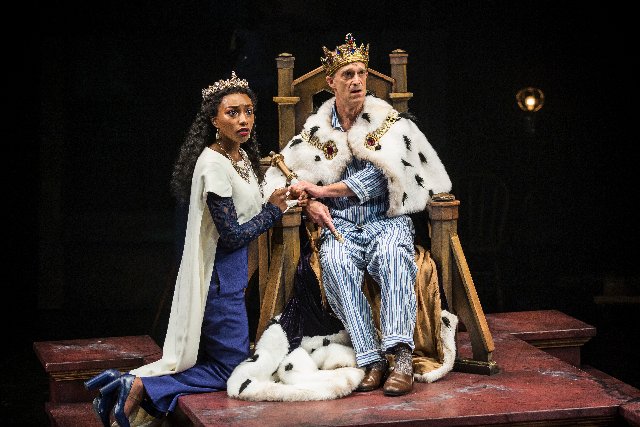 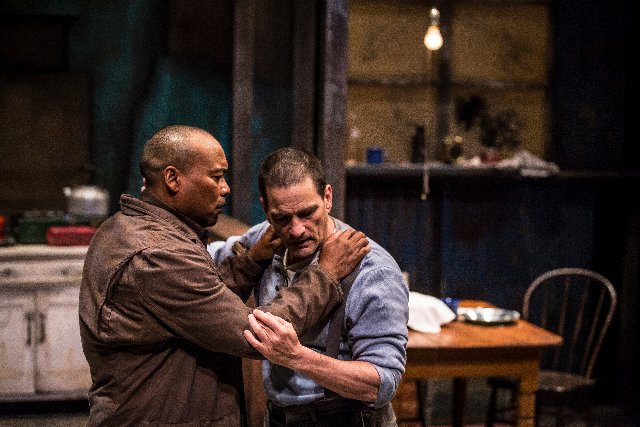 It’s tucked away amid 110 acres of hilly woods and meadows near Spring Green, a town of about 1,600 in southwest Wisconsin.

Indeed, you could easily miss it if you’re not on the lookout for the sign. It points a patron in the direction of the renowned destination.

But there’s no reason to worry: If you drive past it, there’s a good chance you’ll end up in perhaps the only store in a one-stoplight hamlet. Chances are, the clerk will guide you back on your way with a smile.

Once you spot the sign and follow it, the car will ease onto the grounds of the country’s second largest outdoor theater company devoted to the classics. You will have arrived at American Players Theatre, founded in 1977.

Today, it draws more than 110,000 people from around the country and beyond. APT operates with an annual budget of more than $6 million.

The company’s leadership draws from a pool of classically-trained actors. They battle bugs and sometimes rain to clearly, and with authentic emotion, reach the back of the 1,089-seat outdoor Hill Theatre. It’s located atop a steeper hill than the 201-seat Touchstone Theatre.

Whether the actors are slathered with bug spray and battling the elements or unexposed to them within the indoor Touchstone space, the performers are devoted and talented.

“I’m getting to work with these amazing actors,” said Ameenah Kaplan, one of this year’s directors. She’s a graduate of the Academy of Art University Film School and New York University’s Tisch School of the Arts.

This year, she’s helming Our Country’s Good. The play is adapted from Thomas Keneally novel The Playmaker.

Members of ATCA didn’t see the aforementioned. However, the critics saw five plays. Each features strong ensemble and individual acting.

This year’s line-up includes a mix of dramatic and comedic material. There is also some darker, disturbing plays.

One of the more light-hearted plays this year’s is Shakespeare’s As You Like It. The scenery consists mostly of props that actors bring on and off stage. However, one could easily say that the peaceful, natural outdoor environs serves as the setting.

While the Hill Theatre seats 1,089 people, the audience sits in a thurst, semi-cirrcular configuration. This enhances a sense of community between us and the actors. In addition, this production includes laid-back songs. They further reinforce a campfire-like atmosphere at times between characters.

Furthermore, with nature’s animal sounds and trees swaying on a clear night, the Forest of Arden perhaps never seems more inviting. And so, Rosalind/Ganymede, Celia/Aliena, Touchstone, Orlando and others escape to a tranquil wooded area.

While these characters have been exiled from the court, they escape to the perfect haven. It is one for contemplation, merry-making, self-discovery and training in the ways of romance. Also, it’s fitting that the performers enter and exit from the aisles, within touching distance of audience members. As Jaques notes in the famous “Seven Ages of Man” monologue: “All the world’s a stage, and all the men and women merely players.” Bringing the actors into the aisles reinforces that we’re all playing different roles on the world’s “stage.”

In this production, set during 1870 but featuring some questionable costume choices, Jaques is a woman. Tracy Michelle Arnold plays her with a tinge of melancholy without acting depressed. Instead, she imbues Jaques with a scholarly air. She’s a likeable person with confidence, wisdom and spirit, but one who ultimately prefers solitude.

However, Arnold’s Jaques seems comfortable in front of people while speaking the “Seven Ages of Man” speech. She enunciates it in a conversational, deliberate tone without diminishing Shakespeare’s poetry. It’s as though Jaques is trying to force us to consider how the speech is relevant to our lives.

Meanwhile, it would be remiss not to mention Melisa Pereyra’s charismatic leading performance. She gives us a spirited, bold, patient and at times vulnerable Rosalind. Pereyra offers a multi-faceted portrayal, whether she’s playing Rosalind the actual woman, or the male youth, Ganymede, whom she disguises herself as.

Pereyra speaks Shakespeare’s poetry with ease and clearly reveals the meaning and emotion behind the poetry.

Heightened language isn't confined to the Bard's work at this year's festival. Another offering is a stately, funny production of a play from a century after Shakespeare. The piece is the rarely-mounted Restoration comedy The Recruiting Officer.

This 1706 work also features gender disguises and, of course, recruitment. While military officials try to enlist soldiers, characters are trying to recruit each other for romance and marriage.

While the play criticizes the less-than-wholesome tactics of military recruiters, there's an aura of merriment in this play. It is characteristic of the Restoration period, following the long-time closing of theaters by the Puritans. The arts, including live theater, was restored, much to the joy of artists.

That sense of celebration is palpable in the production of this play, which could benefit from editing. It lasts a tad too long, particularly with a scene involving fortune telling. But the actors' command of playwright George Farquhar's language and the beauty of the Hill Theatre makes this production worthwhile.

This two-hander is set during South Africa’s Apartheid era. The play premiered in 1961 in Johannesburg and focuses on two brothers reared by the same black mother. One of the men is lighter-skinned than the other.

The play is set decades ago. However, this combustible work feels eerily familiar to the tension-filled racial climate of 2018. Race is a big, complex issue. However, Fugard zooms his lens in on a single household. By doing so, he personalizes the issue in a powerful, relatable way.

We witness how racial tensions adversely affect an otherwise close bond between two siblings, Morris and Zach. They share a one-room shack in the non-white location of Korsten, near Port Elizabeth.

To be sure, the play features moments of hyper, almost child-like horseplay between the brothers. In this production, an times explosive, at times subdued Jim DeVita (Morris) and a spirited Gavin Lawrence (Zach) convincingly impart that playfulness. These exceptional performers are convincing as siblings. For instance, they talk over one another, as though one can almost sense what the other’s going to say, based on their familiarity with each other. But there’s also a point during which Morris, the lighter-skinned brother, calls his sibling an N–.  As menacingly uttered by DeVita, you feel as though a sharp object has suddenly struck you in the chest.

Indeed, an unsettling feeling permeates the air through the entire second act. The second half contrasts markedly with slower-paced, tedious first act.

Similarly, APT’s mostly strong production of Eugène Ionesco’s absurdist comedy Exit the King feels like it’s never going to end. Vivid performances, and at least one dizzying lighting effect, are among the production’s strengths. However, toward the play’s final moments, one feels as though this piece’s roughly two hours is as long as The Iceman Cometh.

Perhaps the turtle’s pace toward the end is a deliberate choice by director Tim Ocel. Just as he stresses the absurd part of death and dying, portrayed sincerely and with great comic timing by this cast, he gives equal weight to the more relatable aspects of mortality. A clearly scared, desperate James Ridge, as King Berenger, even “asks” those who have died what it was like to leave this earth. Then, toward the seeming interminable ending, he dies a seemingly interminable death. No doubt, many of us have witnessed someone suffer for so long.

Director Ocel doesn’t slam us with a clear political message. Still, some may experience schadenfreude at the king’s painful demise. He is one of at least two Trumpian characters in this year’s APT line-up.

Another such character is the conceited, arrogant Harry Brock from Garson Kanin’s comedy Born Yesterday. The play experienced its Broadway premiere in 1946. Some may also recall the 1950 screenplay with Judy Holliday as the good-natured but not-so-bright Billie Dawn.

In APT’s elegant, comical production, Colleen Madden doesn’t turn Billie into a stereotype of a ditzy blonde with an exaggerated New York accent. With that said, Madden’s Billie, at least in the beginning, is far from erudite. But the actor imbues Billie with a dignity and a sense of self-worth that makes you care about her. This Billie’s laid-back charm and good-naturedness will win you over. So, too, will her fierce determination at the end not to give in to Brock. At this point, Billie’s more learned, thanks to her copious reading. Moreover, it’s not nearly as easy to push this former chorus girl around.

Clearly, Brock is the villain. However director Brenda DeVita keeps the proceedings from veering into melodrama.

Born Yesterday is hardly a dated play. In today’s #MeToo movement, it’s timely and refreshing to see women develop into strong characters and fight back successfully against a bully.

A hulking, commanding David Daniel, with slicked back dark hair and sporting a fancy suit, exudes arrogance, aggression and a sense that he’s in love with himself. Of course, there’s no question that he’s wealthy.

One might say that Brock is the antithesis of some of the folks who work at APT.

Risa Brainin, a freelance director, spoke to ATCA members as a panelist during one of several moderated discussions. She cited an example of how APT’s staff will help one another. Once, it was pouring and she wasn’t wearing a raincoat. A colleague took his off and gave it to her. Apparently that person came prepared for inclement weather. He had another raincoat on underneath.

Chances are, Brock wouldn’t perform such a gesture. However, he claims that he worked hard his whole life to acquire the wealth he possesses.

Similarly, there was a time when APT had scant finances.

David Frank, APT’s former artistic director and producing artistic director, called the company “one of the great miracles.” It “willed itself into existence with very little capital,” the 23-year APT veteran said. But, partly with the help of audiences willing to watch the classics, APT managed to climb out of a deficit “well over $1 million.”

“It takes so much energy to work outside,” she said.

As they battle bugs and rain, the performers might go from one five-hour practice straight into another.

“I cannot believe how prepared they are when they come into rehearsal,” Brainin said.

The Spring Green area may be remote. However, those 110 acres of lush greenery provide a haven for theater artists to prepare classic, world class productions for legions of audiences from throughout the U.S. and beyond. And judging from ATCA’s recent visit, APT’s actors work wonderfully as ensembles and individual performers.

American Players Theatre is located at 5950 Golf Course Road, near Spring Green. Its 2018 season runs through Nov. 18. For more information about showtimes and ticket prices, visit https://americanplayers.org or call (608) 588-2361.