An All Star World Premiere 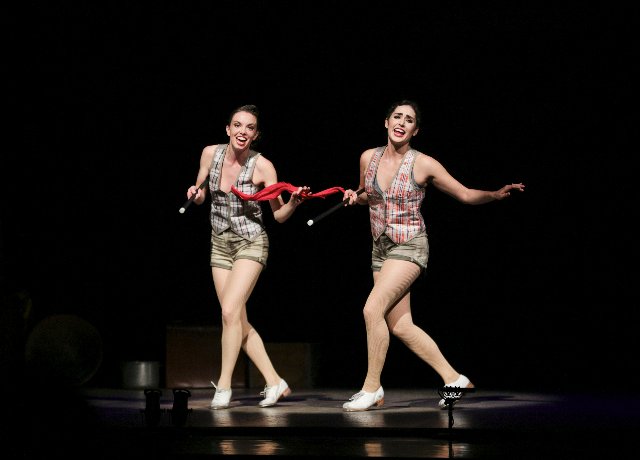 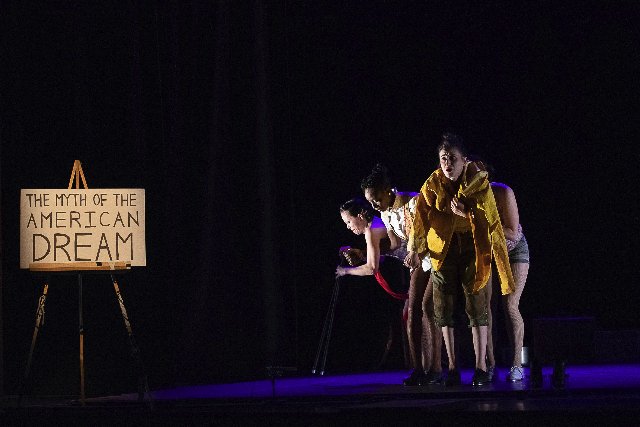 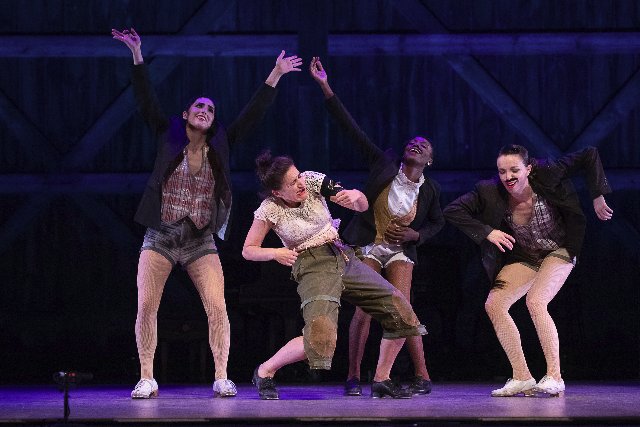 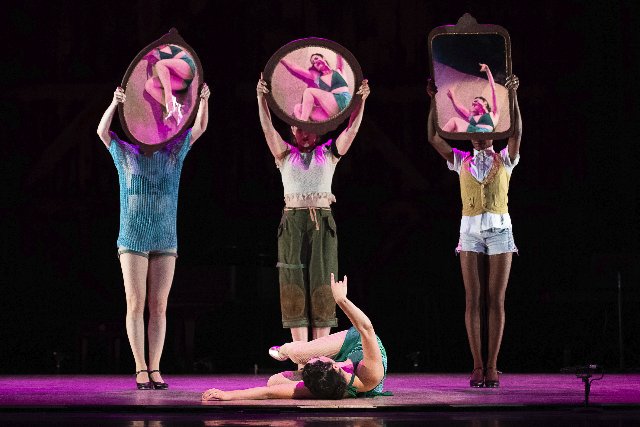 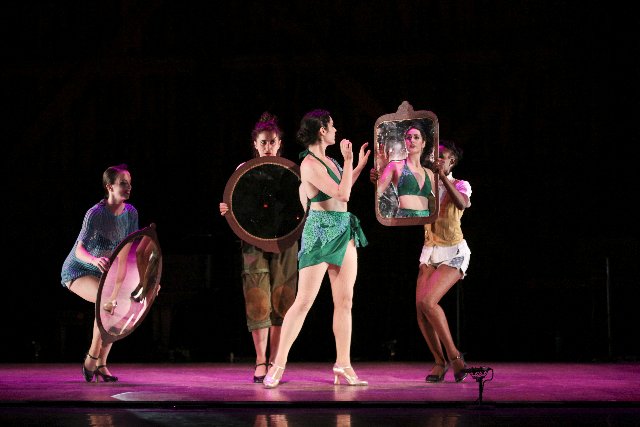 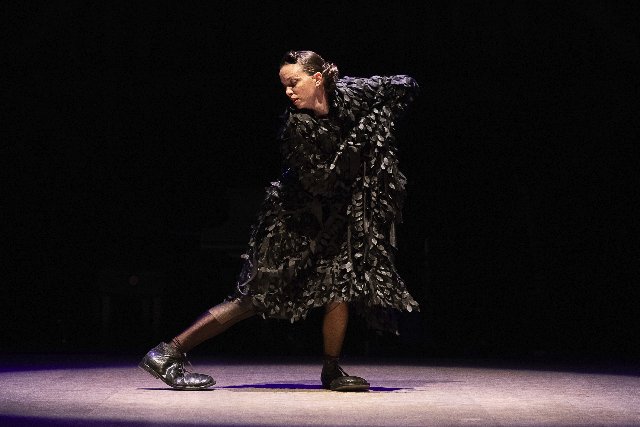 Dorrance in The Ugly Duckling. Duggan. 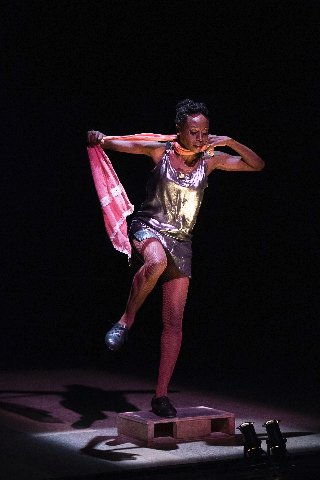 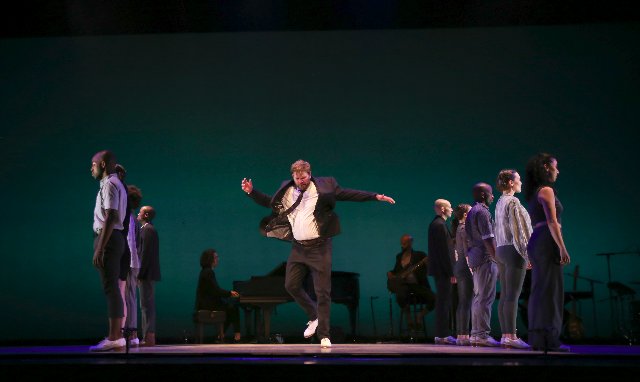 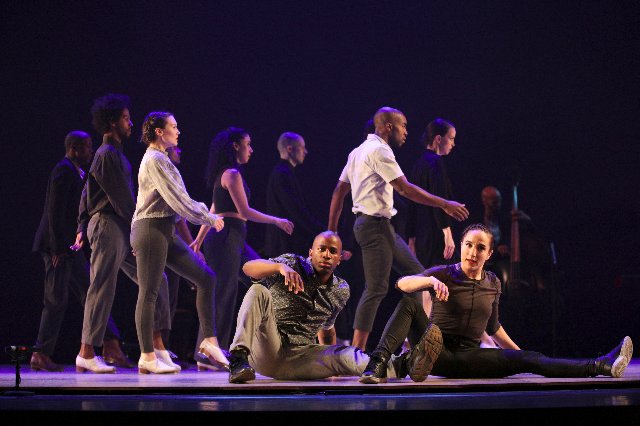 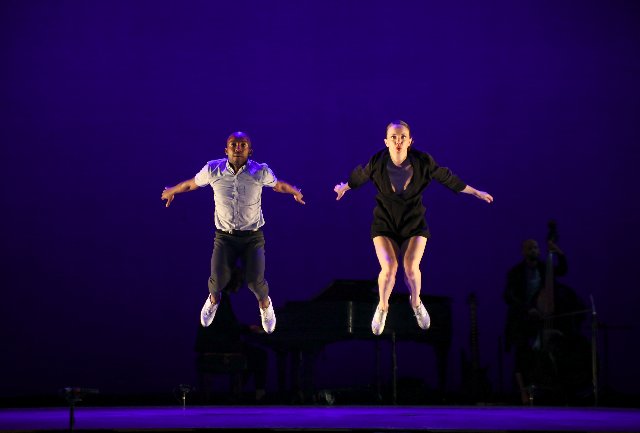 A leap of faith in tap. Eemann photo,

For the past few years the annual appearance of Dorrance Dance has been a highlight of the Jacob’s Pillow season. In 2016 there was a residence and special performance at the ’62 Center for Theatre and Dance at Williams College.

Each time we have seen the company, led by Michelle Dorrance, there have been variations of ways to present the vernacular American art form of tap dancing as high art. The vocabulary of her choreography has expanded theatricality as well as avant-garde experimentation.

Initially, we were floored by her virtuosity as well as that of the company. There was a mix of veterans of tap and emerging dancers. While Dorrance is its best known and critically acclaimed exponent there are other individuals and companies performing tap.

During the residence of the company this week, in general, it seemed younger. That suggests that dancers trained by Dorrance have moved on. That underscores her role as both the best known exponent but also as progenitor and disseminator of tap.

In the world premiere of All Good Things Come to an End that era was evoked with a narrative piece set to music briefly by Artie Shaw and more prominently Fats Waller. The latter, a master of rent parties and Harlem’s stride piano, was known for playful mirth, campy, and at times suggestive lyrics.

The piece was developed in collaboration with three guest artists Hannah Heller, Melinda Sullivan and Josette Wiggan-Freund. They are established artists and, as was richly revealed, tap masters on a par with the skill set of Dorrance.

A part of the jazz and tap tradition were jam sessions and cutting contests in which musicians and dancers challenge and attempt to top each other with ever more intricate riffs. It is well documented that touring celebrities, like tenor player Coleman Hawkins, were blown away when sitting in on after hours sessions with the local cats in Kansas City.

The playful fun started even before the performance began. Individuals in work coveralls and gas masks swept the aisles with push brooms. Passing by our seats we wondered what that was about.

The performance began with an ersatz preview of coming attractions. There were placards with large block letters spelling out the vignettes we were about to see. On the side of the stage was an easel where the signage for each sequence was placed. Earlier in the Pillow season Pilobolus used a similar device.

There was a mix of Biblical, folk tales, mythology and Americana.

The tradition of a cutting contest was vividly enacted with that classic example of sibling rivalry, the story of “Cain and Abel.” There was a gender morph as it was a deadly competition between sisters Dorrance and Sullivan. Evoking the top hat and trails tradition Fred Astaire, they used canes (not Cain) in the routine. They were attired in print patterned short pants and vests. There was a call and answer sequence as the riffs got ever more complex. The canes were used to tap out staccato beats at a furious pace. Eventually, Cain (Sullivan) killed Abel with the comical flourish of a prop that brought the house down.

In what was unusual for the company were elaborate costume changes designed most effectively by Andrew Jordan.

For a Dorrance solo of “The Ugly Duckling” she appeared in a black, feathered wrap. To emphasize awkwardness she wore cumbersome clown shoes which made tap dancing more challenging. As she morphed into a swan, the robe was discarded revealing a slinky, form fitting, black unitard. The mythical transformation was indeed complete.

Drawing on mythology Sullivan was featured as a gender altered “Narcissus.” The beautiful youth was so enamored by gazing at his image, reflected in a pond, that the gods morphed him into a flower. The story line was adhered to as she admired herself in mirrors placed on the floor by three women. It ended with her lying on the floor with the  mirrors placed over her forming the petals of a flower.

The story line of “The Myth of the American Dream” was less familiar. With several costume changes and running a bit longer it was more complex as well as oblique. There were different formations including a group huddle. With playful variations on para-military uniforms with theatrical flair there was a march beat.

The solo of Wiggan-Freund in “Pedestal” confirmed that we were treated to an all star session. Wearing a gold lame, short skirted jumper she was perched atop a very small platform. A guess is that it was two feet wide with rectangles of wood forming top and bottom with an air space between. The design appeared to amplify the beat of tap dancing.

We were astonished to experience the stunning range of complex moves she executed on such a confining space. This included a broad, sweeping stride sequence while, with uncanny skill, remaining in place. The sequence left the audience in stunned awe.

Of course we were perched on the edge of our seats ready to burst to our feet with a richly deserved standing ovation. On stage Dorrance donned that prequel worker’s jump suit. Rather than take bows, in a puzzling and totally in character move, they opened the barn door at the back of the stage and slipped out into the night.

We sat for a moment as the lights came up. The notion settled in that we had seen something rare and special. Give that it was performed by guest artists and all stars it may not often be performed. At Pillow it was supported by a residency made possible by Josh Hilberman, Stephanie Detry, and the Claquettes Club in Liege, Belgium.

The second piece of the program Myelination (2017) featured the company with live jazz.

Here we noted the ever more theatrical and expansive vocabulary of Dorrance. Previously we saw the company in The Blues Project with the remarkable Toshi Reagon. As with the music of Shaw and Waller, Dorrance was designing dance to existing music.

There was also an unuual interaction between dancers and musicians. Van Young, oddly attired in jacket and tie, occasionally joined the ensemble and was also featured in an off kilter performance. While a tap master he is less than paradigmatic and may even be described as awkward and eccentric. It enforced the notion that there is no one cookie cutter definition of tap style.

The tallest dancer in the company, Craft, was used in different functions. In addition to the ensemble he was twice featured in solos. The first was disarmingly slow, poetic and understated. It revealed another style and approach to tap. Then he joined the musicians on guitar contributing a long sustained, ethereal line. There seemed to be no discernable movement of his fingers on the guitar. I tried to focus and isolate the sound he was creating.

A feature of the dance was flux between ensemble work, with a dozen or so dancers creating a barrage of rhythm, and then solos of varying length. The emerging members were confined to a brief strut.

From past appearance we recognized the break/ hip hop/ b girl Ephart “Bounce” Asherie this time paired with Matthew “Megawatt” West. They wore sneakers instead of tap shoes. Both emulating movements of the company they also provided acrobatic street moves. It was a way of noting how Dorrance incorporates, celebrates and is inspired by other contemporary, vernacular forms. It represents a manner in which Dorrance aspires to keep tap fresh, expansive and compelling.

While the ambition of  Myelination was absorbing it seemed stretched out and repetitious. There were too many reprieves of its elements. When all of the individuals in the ensemble crossed the stage in brief highlights, that seemed like the natural climax of the dance. Continuing beyond that with more and more taxed our attention span. It violated a show biz rule to leave them hungry.

Considering that Dorrance has not yet reached mid career one marvels at future possibilities. I couldn’t help but imagine what might happen in a dream collaboration with Lin Manuel Miranda. Just imagine Miranda’s rap combined with Dorrance’s tap.

It just seems inevitable that the next breakthrough for Dorrance will be to conquer Broadway. America deserves this.