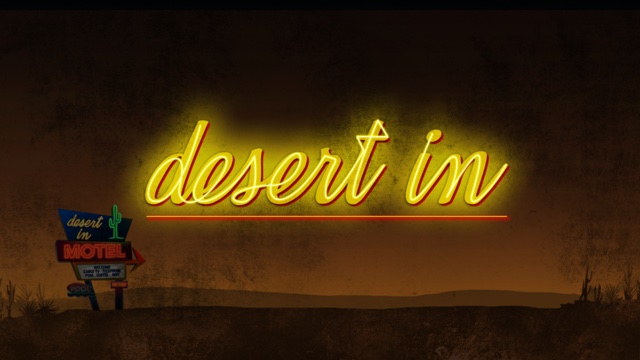 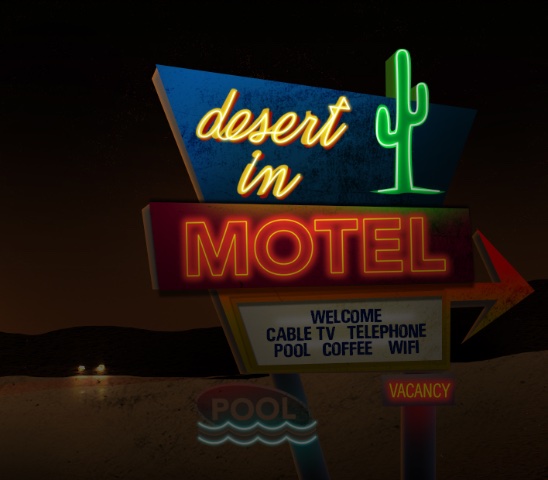 An Inn in the desert is the setting of "desert in" 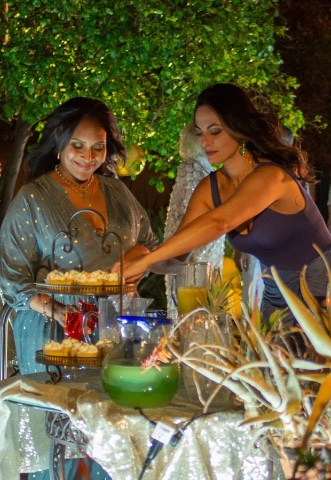 Talise Trevigne and Isabel Leonard, married innkeepers who conjure up the dead in "desert in." 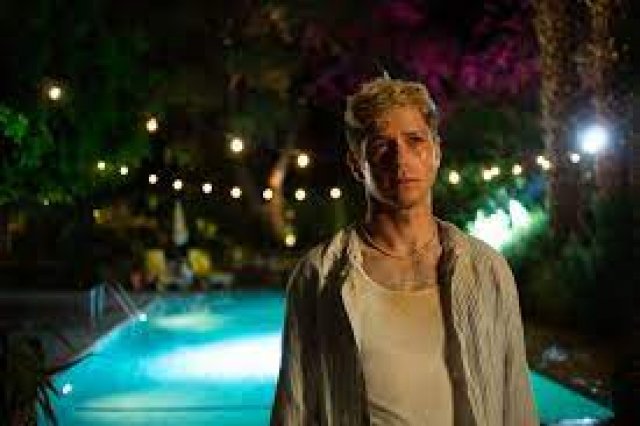 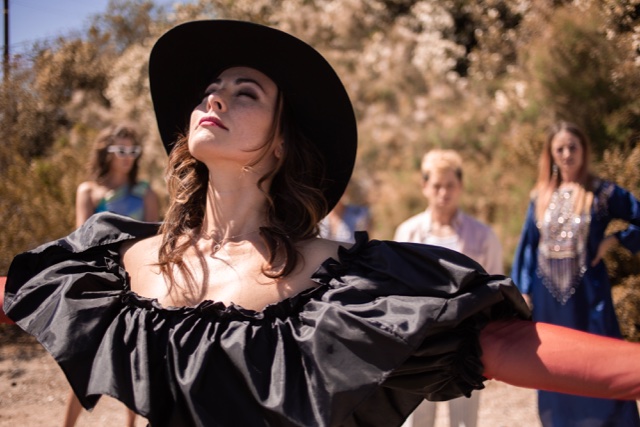 Isabel Leonard stars as an innkeeper and sorceress. 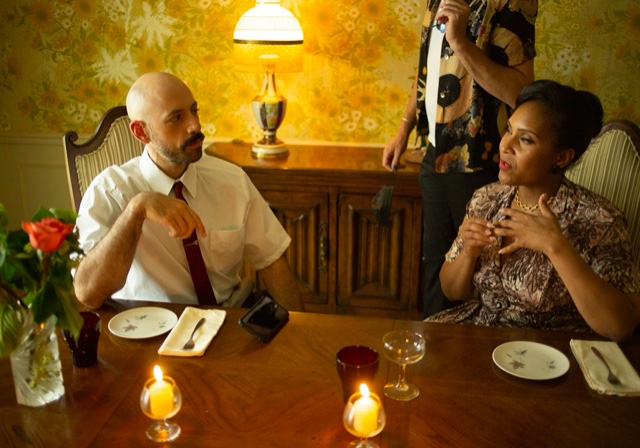 Anthony Michael Lopez is touching and menacing as a handyman at the Inn. In discussion with Talise Trevigne 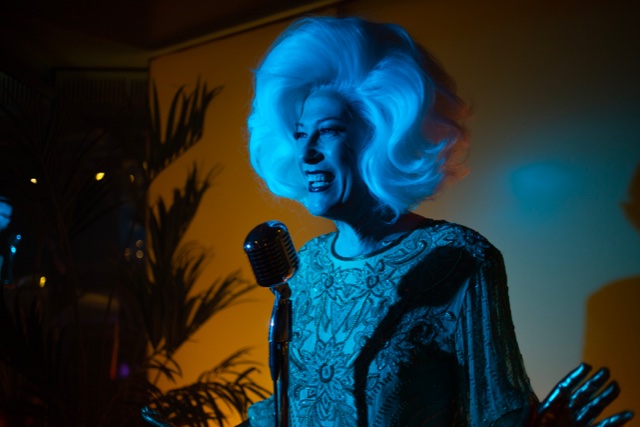 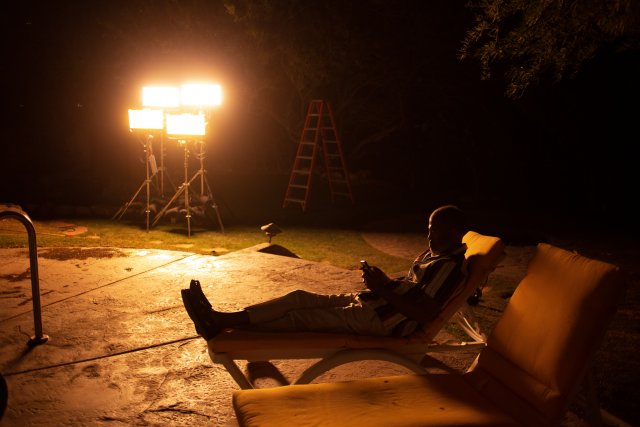 What makes Darrah’s work distinctive is his deep film background. His staged opera productions have the organic quality of film. His production of David Little’s Soldier Songs, collaborating with Johnathan McCullough (who also starred), was an intriguing filmed adventure.

Boston Lyric was brave and savvy to commission this series. Like conventional TV series, many writers, composers and directors contributed to the eight episodes. While the texture and style of each episode is unique to the artists, Darrah’s oversight and the incubating writer’s room supervised by veteran television producer Joy Keckin, give the work overall unity. The style is steamy.

The story and the characters are over-the-top--in characteristic opera form.  Cass and Sunny run a desert in, whose sign is faltering, like the Bates Motel in the Psycho TV series and the kinky Chelsea Hotel. These Inns were inhabited over the years by characters who you will meet again in desert in.

This Inn has a special purpose: to bring to life loves past who have died. Like Ouija communication, for a moment reunion is possible. Or is this a hoax?

Dramatic new techniques are used to visualize music and story. The list of tools and effects employed by Darrah is endless. Actual film loops with sprockets showing give us glimpses of Ion and Rufus, his dead lover. Transitions often have the camera whirling to the beat of the music. Soft focus (a conventional but not entirely satisfactory description) shimmers, as rivulets of music underscore the movement. TV screens show action at the Inn, storytelling and also serving as ‘security.’

The TV models are vintage 1950s. Images are from the early 50s are often striated and muddled. No technique disturbs the closeups of expressive faces, and particularly expressive hands. Hands of singing stars Isabel Leonard and Talise Trevigne entwine to make gripping accompaniments. A Vapor spreading all ten fingers has a like effect.

Vapors are a chorus, seldom seen. The orchestra conducted by David Angus, provides a rich texture, a surprise when there are only seven instrumentalists.

The music rarely drives the drama, as it does in the best of opera. It is mixed with storytelling, and sometimes used as accompaniment. Nico Muhly’s score for episode 7 is the most conventional. His lines sit particularly well in the voice. His colors set the mood. Musical lines are made up of spoken voices, sung ones, the chorus of Vapors and also the breath, the sniffles the guttural sounds of the characters. None of this is simply noise.

Isabel Leonard is a revelation. She speaks about trusting Darrah, and she appears to have been correct in this judgment.  She has never put on a better performance, vocally or dramatically. Playing a lesbian innkeeper, married to soprano Talise Trevigne, Leonard is a surprising film star, whose great beauty is exceeded by her talent as an emoter. At the end of episode 7, Leonard lets out a bloodcurdling scream, which transforms on a dime into a menacing glare. Darrah has unleashed her deep reservoirs of feeling, and, in turn, the richness of her voice. She is both moving and camp. Fun and wicked too.

Leonard talks about reducing her streaming fare to Netflix during Covid. This period of reflection has given her this chance to break out. Like many of her young fellow artists, Julia Bullock and Davóne Tines among them, she may choose both a more adventuresome and more self -protective path in the future.  She deserves one.

Davóne Tines appears as the off-screen voice of an old man, played tenderly by Ricco Ross. Tines is one of many singers in this luxury cast.

Raviv Ullman, the central actor, is Ion, which means both “God is Good” and also  refers to “John the Baptist."  He does not have his head cut off literally, but he is put through difficult paces. His performance is captivating.

Episode two introduces transgender Mx. Justin Vivian Bond, advertising the Inn, and the center of attention at a pool party. Darrah gives us a touch of Busby Berkeley, Esther Williams, and foreboding at the party. It is  a visual masterpiece.

Small touches add to the work’s pleasure. When Leonard becomes a sorceress, she wears a hat, which although it is not pointed like Margaret  Hamilton's in Wizard of Oz, reminds you of the Wicked Witch of the West.

So many hands in the pot might suggest that this is a pot pourri. Yet Darrah’s involvement from the start as conceptualizer, and throughout, overseeing production, help each episode fold into the next. gives the piece a unified style. Producer and writing supervisor Joy Keckin gave an overarching line to the series.

The inventive and passionate opera director Graham Vick, who died of complications from Covid, was determined to close the space between the performance of opera and its audience. He would have appreciated this new steamed miniseries.  Leonard speaks about attracting a new audience and then having them come and see her in Cosi Fan Tutti.  While this may not happen, opera companies would do well to keep producing streaming productions which draw in new audience. These are not video records of operas’  past, but inventive new multi-media opera.

For their daring, for the excellence of the production and for giving contemporary composers and singers new opportunities, bravo Boston Lyric Opera.

desert in is available here.