Anna in the Tropics By Nilo Cruz 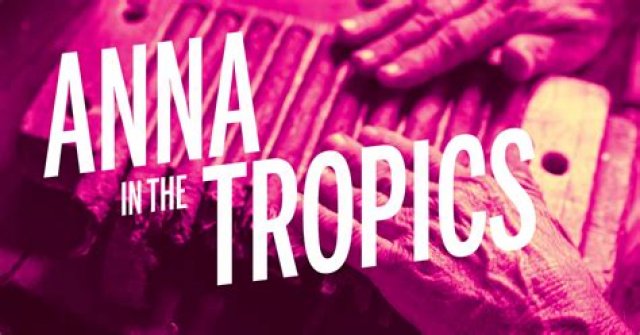 Anna in the Tropics by Nilo Cruz is the 2003 Pulitzer winner for drama, making Cruz the first Latin American to win the award. Taking place in 1929 in a cigar factory, the play tells a story of workers who would listen to a lector read a story as they roll cigars.

It is set in Tampa, Florida at the end of Prohibition. This doesn’t prevent the Patriarch, Santiago (Gilbert Cruz), from drinking and gambling. In a split level opening scene he is literally in the pit betting on cock fights. He is losing to his half brother Cheche (Alexis Cruz) from whom he begs a loan to stay in the game.

Lacking paper he carves an IOU, a share in the family cigar factory, into the sole of his shoe. The luck of Santiago never turns.

Above the pit fight on the main stage the three women of the family- the mother Blanca Camacho (Ofelia), older Marina Pires (Conchita) and younger Gabriela Saker (Marela) daughters- await the arrival of a ship from Cuba with the new lector Alex Rodriguez (Juan Julian).

A lector is a hired reader who entertains and educates workers during tedious shifts of hand rolling cigars. The last lector ran off with Cheche’s wife. With just a photo to ID him among the debarking passengers he is described as handsome. Marela, played as juvenile, shrill and silly by Saker is so excited that she, literally, pisses her pants.

Conchita is more reserved but locked in a loveless marriage to Palomo (Wilson Jermaine Heredia) she soon takes the handsome lector as her lover. That sets up an interesting dynamic with her husband who has a mistress. They still love each other, and through discussion of their affairs, grope back into each other’s arms. There is a bit of voyeurism entailed.

Rodriguez, who projects less than the galvanic charisma entailed by the role, proposes to read from the tragic Tolstoy love story Anna Karenina. Intimate intricacies of the novel insinuate into the plot of the play by Cruz.

Could the director Elena Aaroz have evoked more from Rodriguez? And perhaps better handled Saker who morphed from giddy to introspective and morbid. It is ill-defined what went down when she was abducted by her uncle. She just shows up at the factory wearing the Anna costume from the night before. Is it Cruz or Araoz who renders her mute?

Close attention is required to follow the play, its sub plots, and the explosive surprise ending which catapults a quotidian tale of infidelity, passion and revenge into a tragedy.

There is the time specific setting of the end of prohibition but also a moment of the demise of hand rolled cigar factories. They have suffered hard times and cutbacks. The factories that are left have fired their lectors.

The pressure on the cigar business is twofold. On the one hand is mechanization which Cheche proposes. On the other, the undeniable truth that Americans prefer to smoke cigarettes. There is discussion of Hollywood movie stars who are taste makers. How to get them to smoke cigars?

Inspired by the enthusiasm for the novel Santiago develops a cigar of the finest quality to be called Anna Karenina. Marela is suitably attired to be photographed as the logo. With bootleg rum they smoke the first cigar and celebrate its launch.

Triumphantly, Santiago declares that the new product will cost ten cents each. Do the math and you see the problem of why the industry is doomed.

While Cheche is demanding more control he is brushed aside by Ofelia who is firmly played by Camacho. She is the glue in the family propping up her weak husband and insisting that they stay with their tradition that dates back to indigenous people.

While Santiago is weak he manages a loan to pay his debt to Cheche (an adequate Alexis Cruz)  now fuming and vengeful, and maintain control of the disintegrating family business.

The play is framed by a generic, drab set by Justin Townsend. There are the large beams of a factory, individual work tables, and at the back of the stage a mural blowup of dark clouds.

The costumes by Christopher Vergara are of the period with a Latin flair. He has fun dressing the ladies in fancy attire for the celebration scene. The men wear vintage suits including white linen for Julian.

The key role is the lector and its tepid performance by Rodriguez blunts the drama. Not just the romantic lead he is also intended as a mentor and educator. Consider, he is bringing Tolstoy to factory workers. While Cheche sees him as a waste of money the women argue that he represents literature.

For the most part, the characters are predictable and one dimensional. The difference is Conchita, the embodiment of a deeply conflicted Anna. The Russian character gave up her family and security to live as a social outcast with the dashing Count Vronsky who eventually abandoned Anna and returned to society.

That’s not how it resulted in this play but Tolstoy defined the issues of infidelity, jealousy and revenge. We feel that most clearly through the strong and nuanced performance of  Pires’ Conchita. Heredia partnered well with her as the estranged, conflicted, cuckolded husband who, in a way, still loved her.

An uneven, tepid production came, as we said, to an explosive conclusion. That bolted us up in our seats. Based on what we knew of Tolstoy, it came as a surprise when Cruz played that card. Arguably, it’s what earned him a Pulitzer.