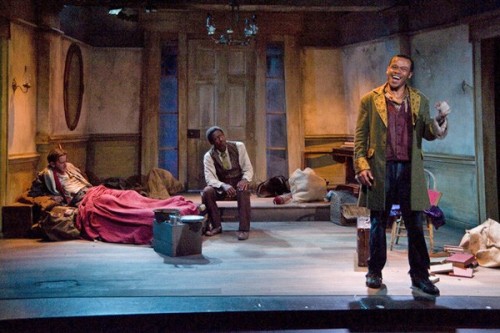 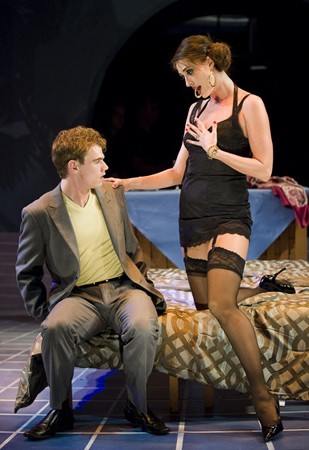 Sex with Mrs. Duval (Sara Gettelfinger) is the price for a meet between Nick (Jay Armstrong Johnson) and her record producer husband. 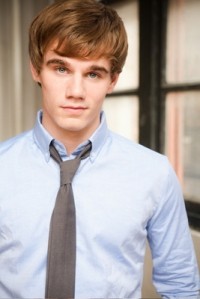 Johnson lacks the chops and sex appeal to carry the leading role. 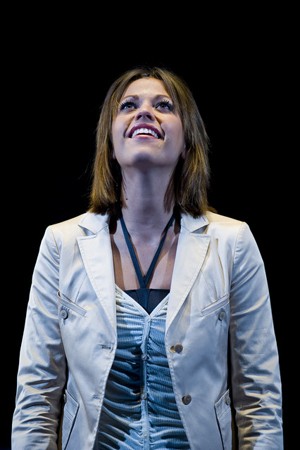 Nick is smitten with April (Cortney Wolfson) who passes herself off as an actress.

The musical Pool Boy by Nikos Tsakalakos and Janet Allard, had a fast paced, zesty, wham bam thank you ma’am world premiere last night on Stage 2 of the Barrington Stage Company in Pittsfield.

Under artistic director, Julianne Boyd and William Finn, the Musical Theatre Lab Artistic Producer, BSC has been noted for developing musicals. Some have had legs and made it to Broadway and back.

The premiere of Pool Boy has been much anticipated which is reflected in strong advance sales. Certainly its premise is young, fresh and enticing. There may indeed be something here to resuscitate but based on the tedious and uneven two hour performance, in two acts last night, in its current form Pool Boy is going nowhere.  This play, a work in progress, is destined for intensive care and an extreme makeover.

Well, start with the miscasting of Nick (Jay Armstrong Johnson) as the Pool Boy. While sincere and energetic he has none of the charisma, looks, talent and sex appeal to drive this tale of aqueous ambition. Everything about him is so generic that it renders all too literal the notion that his rising star is going nowhere. It takes two hours and a ton of songs, with a bit of banter in between, to watch him crash and burn.

Which may be harsh on a production that featured enormous energy and some terrific moments but just not enough of them.

Flashing seems to be all the rage this summer in the Berkshires. Last week we saw an actor streaking at the Williamstown Theatre Festival. Then,  last night, topless in Pittsfield. What next? Seems we are ripe for a revival of Hair. Is this the redawning of the Age of Aquarius?

The prudish, portly and uptight Mr. Lopes (Clif Bemis) orders the Pool Boy to entice Mrs. Duval to cease exposing herself. It appears to offend the guests of the upscale Hotel Belair in LA of which Mr. Lopes is the manager of the past 25 years.

During this exchange Mrs. Duval, a stunning woman with legs that don’t quit, taunts, entices and seduces the shy Pool Boy. She is the wife of a successful record producer (John Hickok). And the Pool Boy hopes to cut his first CD. Duh, plot.

The fact that the sophisticated, sexy, bored and jaded Mrs. Duval is so eager to bed the Pool Boy, given the material, is hardly credible. Why bother? At best he’s a twink. Surely there may be more enticing prey for this slinky predator skulking about the pool.

By then we are assaulted by a non stop barrage of songs. Oddly enough the audience was not given the song list. But the press was. What was that all about?

In addition to showing her boobs it seems that Sara Gettelfinger is a terrific actress and compelling singer. It is nice that she took one off for the team but this was hardly necessary. Not that we didn’t enjoy the view. But there were less obvious ways to convey that she was a wanton woman.

It set up the competition for the Pool Boy with her younger, and oh so cute, assistant April, nicely played by the very talented Cortney Wolfson. Considering that they are competing for a dork the play just unravels.

It seems that when April and Nick first meet they are both lying through their teeth. He just assumes that she is a famous actress which he kindah recognizes. Which prompts him to claim that he’s a rock star, big in Japan, returning from a world tour to cut a new album in LA. Of course they both finally trip up and get outed. Like, she discovers him in bed with her boss. That sure put a damper on their budding love.

After that April is off to the Galapagos with her new lover the Sultan of Nubai, played hilariously over the top by the wonderful Sorab Wadia. He has nine wives but wants to add April as his mistress. Nick it seems has been promoted to his go to guy/ bitch. The former Pool Boy is forced into serving his girlfriend and boss during an intimate dinner. He even serenades them on marimba. Are you following this?

There is a somewhat racist subplot. Which may just be very LA. It seems that the hotel manager insists that his name is Lopes. In fact it is Lopez. But as a Mexican he will get no respect. Or so he tells us when his heritage is revealed. Nick’s manager is Jack (Jon Norman Schneider) who does his Charlie Chan riff with Mr. Lopes. Jack is the Asian Fusion chef for the upscale hotel. He then turns to Nick, whom he is attempting to manage, with “hey dude.” Sorab Wadia’s smarmy Sultan is straight from central casting.

So Pool Boy is really a musical cartoon. Every character conveys a broad stereotype. Nothing subtle here. The play is redolent with post politically correct racial profiling. Some of it is funny, like the hilarious rich and abusive Sultan, while most is not. Schneider’s Jack is  weak, embarrassing and ineffectual. We have compassion for Cliff Bemis as Mr. Lopes.  Concealing his ethnicity as a career decision is all too credible. Bemis was the most accomplished actor and best singer on stage.

One senses that this play would get a better reception in New York or LA. In the Berkshires it is a bit tough to feel drawn into all those celebrity references and blind ambition. In our bucolic mind set it is hard to relate to the hard ass talent manager Mr. Duval (John Hickok). Post coitus Mrs. Duval, who has set up a meeting as a perk for servicing,  advises Nick to drop the tennis match with her husband. After Nick slams home game, set, match it’s a wrap on his career. After that?

Well, you guessed it. Back to being the lowly Pool Boy. Having lost it all, including April, he has, be still dear heart, found himself.

By then, frankly my dear, I didn’t give a damn. Well, tomorrow is another pool day.