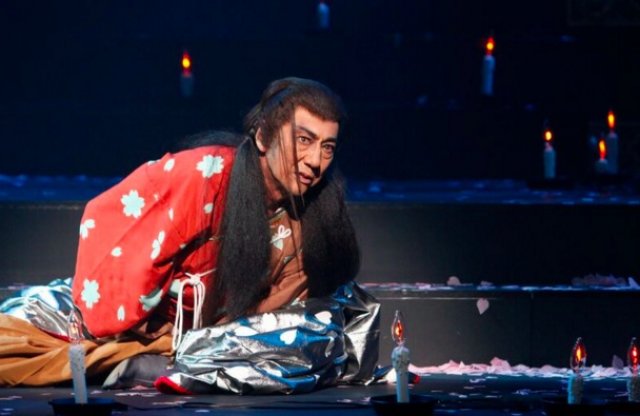 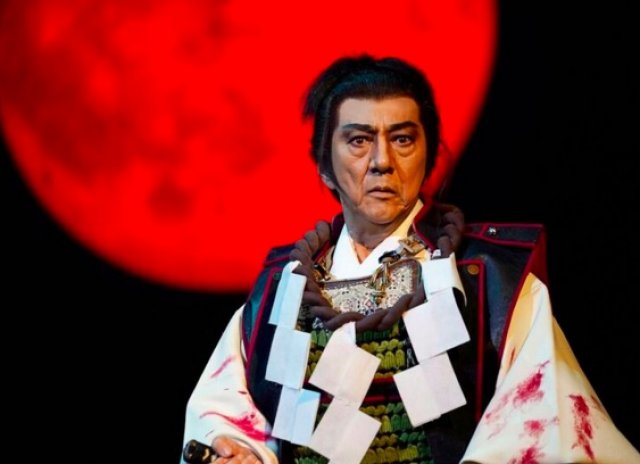 In the feudal days, the Japanese flag was centered on the red sun. ? There are many traditional shades of red. The Japanese gave each shade of red its own elegant name in the old days. Shuiro (vermilion), akaneiro (madder red), enji (dark red), karakurenai (crimson) and hiiro (scarlet) are among of them. 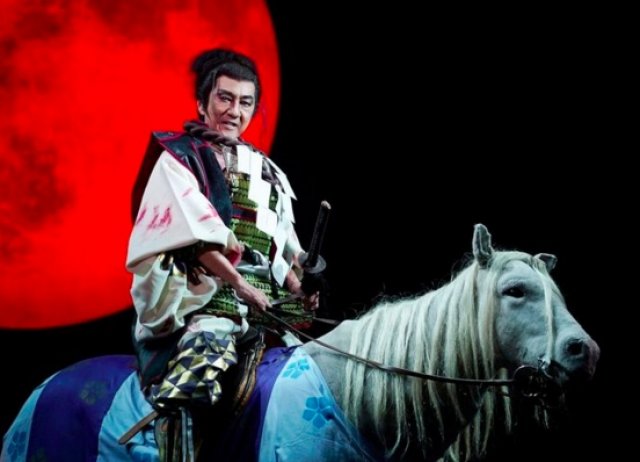 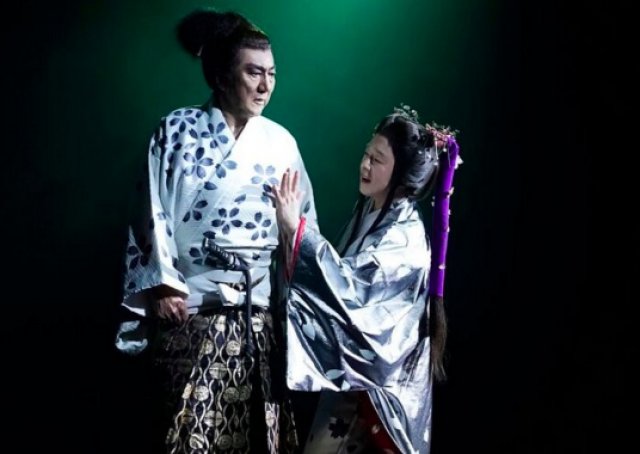 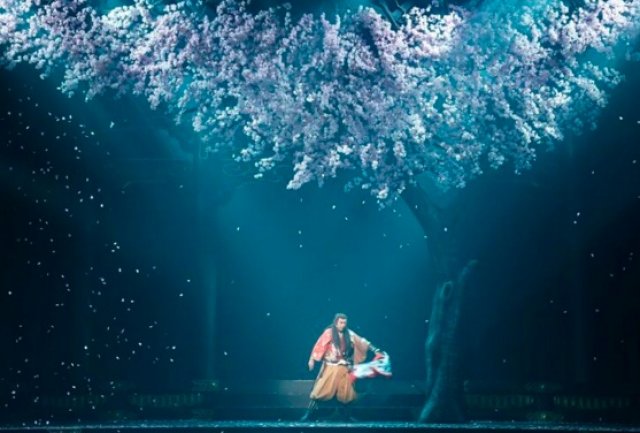 The cherry tree and its blossoms are central to Japanese tradition.

Ninagawa’s Macbeth packs a wallop at the Koch Theater. Presented as part of the Mostly Mozart Festival, Shakespeare in Japanese sits well in the highly dramatic Gabriel Fauré Requiem, and other music of the classical West.

Famously director Ninagawa was struck by the insight that his Macbeth should be performed in a Buddist household altar, which in miniature version houses the ancestors of residents of Japanese homes. For a Japanese audience, Macbeth becomes a play within a play. Before us is the drama of a bad king and his wife. Peace cannot be restored to the kingdom until Macbeth is replaced.  Behind him parade the ghosts of everyone we have come from.

Two old women push back the screens of the altar at the beginning of the drama. They sit on the sides of the stage during the performance, eating as audiences did at the Globe.

One exciting and impressive stage tableau follows another. Visual delights abound. Cherry trees suggest ephemeral nature in Japan, and the passing Macbeth regime is symbolized by them.

Set during the feudal period at a time when Shakespeare was writing 10,000 miles away, the costumes are richly textured and lush.

The few spotlights which light the stage seem to move through particulates into nothing.

For English speaking people, Shakespeare is about text. What to make of the Japanese translation when you are lucky to know ten words in Japanese?

Leaning back I listened to sounds that are harsher than English, and suitable to this tale. For the Japanese, the words are meaningful because they are cast in modern idiom.

Although Japanese style is polite and does not readily expose deep emotion, gesture can. Noh drama has a long history of gestural expression. Ninagawa takes full advantage of reaching arms, splayed hands and a frozen knee dip. Taken together, these dramatic movements resonate emotionally.

Embedded in music of import from the Fauré Requiem and Samuel Barber, among other composers, you are filled with feeling.

The ghostly witches double, double, toil and trouble. Banquo’s ghost is invisibly terrifying. The mix of reality, dream and imagination takes place on one plane, yet each one is clearly distinguished in tone.

When the two old women get up to close the screen at the plays conclusion, we are exhausted and exhilarated.

Just before his death in May 2016, Ninagawa was rehearsing a revival of his Macbeth. He wrote that h hoped this interpretation would “knock out the world. As I am now approaching…the end of my life, I wanted to confirm if I had really created a production that expressed my vision of the world and if I had been able to display a definite ability.”

The extraordinary performance of his Macbeth will have a lasting impact on theater.

This production at Lincoln Center is the final one of Ninagawa's Macbeth.  It deserves to be remembered and celebrated.