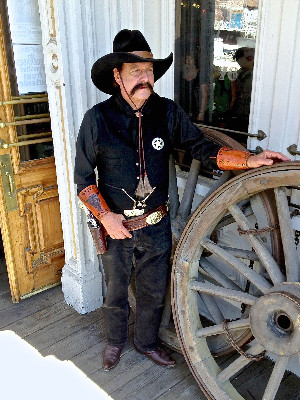 LONG MAY HIS STORY BE TOLD: WYATT EARP HELPS KEEPS THE WEST ALIVE AT THE BUCKET OF BLOOD SALOON IN VIRGINIA CITY, NEVADA.

By the time he took part in The Gunfight at the O.K. Corral in Tombstone, Arizona Territory, Wyatt Earp was already famous; after that October afternoon in 1881, he was a legend. In the years that followed, he and his beloved wife, Josephine Marcus, moved from boomtown to boomtown, seeking fortune and adventure, and their travels naturally brought them to Nevada. In 1897, Wyatt and his close friend Bat Masterson were in Carson City for the momentous Corbett-Fitzsimmons prize fight and were seen, armed, escorting the fighters to the ring the day of the fight. In 1902, Wyatt was in Tonopah, running a saloon, prospecting for gold and working as a deputy marshal. Now, Wyatt can be found most Sundays at the Bucket of Blood Saloon in Virginia City, where he mixes easily with locals and visitors and happily engages in conversation about his life and all things western.

Wyatt makes his appearances courtesy of reenactor Michael Curcio, an actor, artist, and former Western Fast Draw Association top-ten competitor. Curcio originally researched the lawman’s life in connection with a theater role, and then was drawn in. Curcio said, “I was in a re-enactors’ group called The Guns and Gals of Old Virginia City. The group wanted to do the O.K. Corral to music. To do this properly I needed to research who shot who, how many times, etc. This is when I became enthralled with Wyatt’s life and his adventures. The more I read, the more I became fascinated with this fellow. He was not afraid to try anything.”

THE BUCKET OF BLOOD SALOON AND DAVID JOHN AND THE COMSTOCK COWBOYS.

Wyatt’s current haunt, the Bucket of Blood Saloon, built in 1876, anchors “C” Street, the bustling heart of Virginia City. A National Landmark, the town includes five hundred buildings dating to the time of the great bonanzas. Virginia City, the first silver rush town, owed its first success to the 1859 discovery of the Comstock Lode, and at its height in 1863 had 15,000 residents. These days, the Bucket of Blood is packed on the weekends with crowds drawn to the wonderfully high-spirited western music provided by David John and the Comstock Cowboys, the official house band. Many in the audience dress in period garb, (cowboy, gunfighter, gambler, saloon girl, schoolmarm) and nearby stores sell western wear (Stetsons, boots, ladies’ Victorian clothing) that helps the newly arrived get into the spirit. John said, “When Virginia City visitors (from all over the world) walk through the doors of The Bucket of Blood on a Saturday or Sunday afternoon, they immediately step back in time.” A number of the Cowboys’ songs reference Wyatt himself; be sure to request “Let My Soul Pass Through Tombstone,” written by David John himself.

The Bucket of Blood Saloon is located at 1 South C St., Virginia City, NV. For information about the performance schedule of David John and the Comstock Cowboys, visit http://www.comstockcowboys.com. If you want to arrive in Virginia City in style, ride the historic Virginia & Truckee Railroad (“Queen of the Short Lines”) from Carson City and step off near the original 1870 V & T passenger depot, just three blocks from Virginia City’s main street. http://www.virginiatruckee.com.

PAYING YOUR RESPECTS TO WYATT IN COLMA.

During all his years of law enforcement and gunfights, Wyatt Earp was never so much as grazed by a bullet. He died at home in Los Angeles on Jan. 13, 1929 at the age of 80 with Josie at his bedside. The pallbearers at his funeral included western film stars William S. Hart and Tom Mix, both of whom were his close friends. Josie, who was of Jewish heritage, had Earp's body cremated and buried his ashes in the Marcus family plot at the Hills of Eternity, a Jewish cemetery in Colma, CA. When she died in 1944, Josie's ashes were buried next to Earp's. His grave is visited frequently by admirers, who often leave coins, poker chips, badges and unsmoked cigars as tokens of remembrance. ??

"Of all possible subjects, travel is the most difficult for an artist, as it is the easiest for a journalist." W.H. Auden.