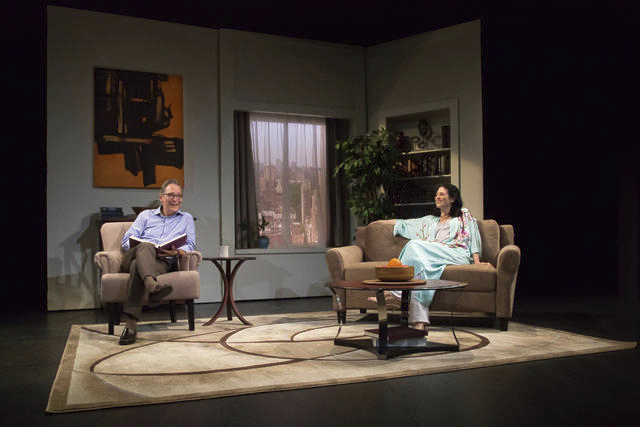 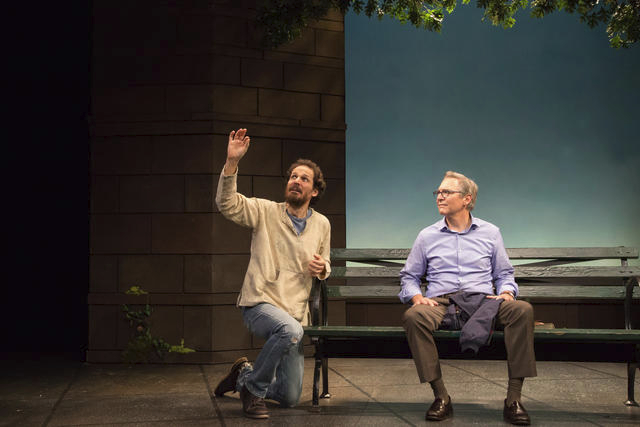 Jerry (Joey Collins) and Peter meet in the park.

Directed by Eric Hill in the Unicorn Theatre, Edward Albee’s powerful but vexing and  perplexing two act play, At Home at the Zoo (Zoo Story), is being given a riveting production by Berkshire Theatre Group.

Originally a one act play The Zoo Story was Albee’s (1928-2016) first success in 1958. Turned down by New York producers it premiered in Berlin paired with Krapp’s Last Tape by Samuel Becket. His play was later produced off Broadway with mixed reviews but a few raves that indicated an emerging talent in American theatre.

In a 2011 interview Albee said “ ‘The Zoo Story’ is a good play. It’s a play that I’m very happy I wrote. But it’s a play with one and a half characters. Jerry is a fully developed, three-dimensional character. But Peter is a backdrop.”

He added a prequel or first act Homelife. It resulted in a full length play running at some two hours  with an intermission. Initially titled, Peter and Jerry, since rebranded as At Home at the Zoo it premiered at Hartford Stage in 2004.

After that, Albee refused permission for all but non equity and college productions in the original form as a one act play.

While Albee felt that the confluence of acts was seamless there feels like a disconnect. Starting low key and understated with somnambulance entailing enervating chit chat between husband and wife it ratchets up in a burst of emotional dénouement. It is meant to reach the intensity of the surprising and violent conclusion of the second act.

The bookends of first and second acts are supposed to prop up the slim volume that is Peter. It is a revealing gag that he publishes text books which he is shown reading. Cripes, how boring is that? As outed by Jerry in the second act it pays well.

If the first act, set in the high rise Manhattan apartment of Peter (David Adkins) and Ann (Tara Franklin) is a bit of a crawl, the second act builds and ultimately crashes over us with the intensity of a tsunami.

It is know that other than a bit of tweaking Albee did not rewrite his work. He might have fixed his concerns with Peter but preferred to flesh him out by writing a first act. The result feels disjointed. The original Zoo Story was an outburst of sanguine youth. It is a product of unchecked and outrageous energy. The addition, coming  at the end of his career, has wisdom, craft and calculation but takes us to a place we may not enjoy visiting.

The curious result is that Peter remains an emotional enigma now burdened with an awkward backstory.

There is an intended symmetry which is a stretch. Now in the prequel, forced into a discussion of their enervating sex life, what bursts out, after decades of marriage with two daughters, a cat and a pair of parakeets, is a youthful violent sexual encounter in which he was as much victim as perpetrator. This is precisely like the chance encounter with the vagabond Jerry (Joey Collins) in the park.

In Albee’s makeover Peter still emerges as a half character compared first to Ann and then Jerry.

Peter, given a super performance by Adkins under the artful direction of Hill, still lacks depth and dimension. He is a successful executive in a publishing house, a good provider and loving father and husband, but there is no there there. He is a milquetoast who receives and meekly responds to the assaults and agendas of others. Only when cornered do we get any sense of him mostly in flummoxed shock, remorse and degrees of panic.

There is little wonder that the other characters are more interesting. Albee invested emotional energy in them to the neglect of Peter. Although Albee, and now his estate, have forced that expansion on us the brilliant and iconic Zoo Story still stands on its own. It is so unique and compelling that the playwright was ill advised to fiddle with Peter.

In his own reckoning it may have been troubling but, as they say, if it ain’t broke don’t fix it.

We feel sorry for Peter, he’s such a spineless sap, but it’s just sympathy and this production fails to create empathy. That lies with Albee not Hill.

BTG threw a lot into it. Paired with Adkins the character of Ann, superbly played by Tara Franklin, is a snarling fangs and claws slashing tigress. This also our take on Zoo Story. The title derives from Jerry having just come from the zoo. That explains the title. There is a double entendre that Albee wrote Ann and Jerry as animals. Dramatic extremes bring out the law of the jungle in them.

In the first act the design by Randall Parsons evokes the domestic tranquility of a comfortable but bourgeois apartment. The sound design by J Hagenbuckle has us listening to low volume Miles Davis. That signified something more edgy to follow but it might just as well have been Mozart. An abstract expressionist painting on the wall also raised false hopes. Given Peter’s low key, defensive, conservative world view, yet again, it might have been a framed bullfight poster.

Albee gives us a caricature of Peter’s lack of manhood. In an exchange with Ann that ratchets up he complains that his circumcision is failing. Cripes, what an image for a guy with no balls. Unable to stop laughing she cracks “And you’re not even Jewish.”

For Ann that gets the ball, or shall we say balls, rolling. That quickly escalates into an emotional shit storm. While bored in bed she insists that she loves him. Beyond obvious domestic security we can’t figure out how in hell why.

At the end of the holy mess of the first act, being Sunday, he announces that he is headed for his favorite secluded bench in the nearby park. Point, set, match.

Which puts him on a collision  course with the amazing Jerry  with over the top, slam-dunk power as played by Joey Collins.

This folks is the Albee who went on to become one of the great playwrights of his generation. It’s what we came for and the two actors stand and deliver.

You may be surprised by that comment, since I have described Peter as such an empty suit, but Adkins does terrific work as the straight man. He is perfect as the foil and setup for the every escalating, runaway freight train of Joey. They are locked into a collision course. Just like that coed he hurt during a drunken fraternity hazing, Peter never sees it coming as his life is ruined in a flash.

While BTG is presenting, shall we say, one and a half plays it’s a too rare opportunity to see Albee in the Berkshires. Praise the Lord for that. Amen brother.