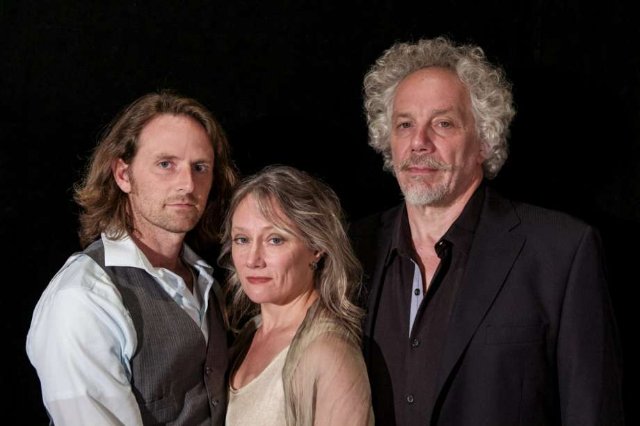 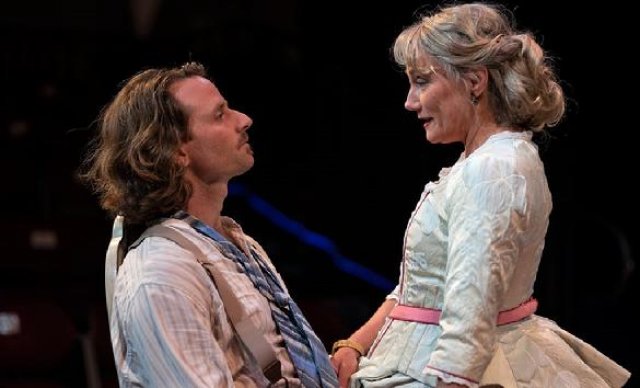 For the first time Shakespeare & Company is presenting the Swedish realist/ naturalist playwright, August Strindberg (1849-1912) adapted by David Grieg. The ninety minute, one act, three hander Creditors was published in 1889 and premièred the following year.

Billed as a dark comedy it is hardly light summer fare. So there is some risk taking on the part of artistic director Allyn Burrows accenting to a request from the gifted director Nicole Ricciardi.

That bold move and calculated risk has resulted in one of the short list, must see productions of the Berkshire theatre season.

Under the skilled and nicely paced direction of Ricciardi the S&Co. veterans are presenting a master’s class of the very finest of classical acting. We have seen them in numerous productions of Shakespeare but here they tackle and conquer the challenges of paradigmatic modernism.

As the initially mysterious, arch and domineering Gustav there is a powerful, riveting and nuanced performance by Johnathan Epstein. He willfully sabotages the marriage and well being of the vulnerable and naïve artist Adolph. We have often seen Ryan Winkles in comic roles and here we enjoy enormous growth and technique in his range. Kristin Wold, as Telka, is another member of the company taking her skill set and virtuosity to a new level.

While the three actors provide superb individual performances in this instance the whole, truly, is far greater than the sum of its parts. They interact with each other in such synchronicity that the end result is quick, ever in flux, dynamic and truly astonishing.

Were one to conflate Strindberg, Norway’s Henrick Ibsen (1828-1906), and the Russian, Anton Chekov (1860-1904) with Norway’s artist Edvard Munch (1863-1944) one might describe a Northern European Dionysian sensibility. There is a psychological introspection and intensity leavened by bloviating, quirky, ironic humor.

The occasional moments in Creditors when the audience laughed were with relief and guilty pleasure. There was the contradiction that this drama was serious, intense, catastrophic and not at all a laughing matter. Which is why outbursts of relief are obvious and necessary. We must have light the better to illuminate darkness. One thinks of  analogies of shadows in Plato's The Cave.

Given progressive changes that were to follow it is usual for critics to dissect Strindberg and his fellow artists as proto feminists. A trope is to focus on strong, struggling and independent women. Both Nora, in Ibsen/ Hnath’s “Dolls House Part 2,"  and Tekla write roman a clef novels that ridicule their former husbands. They make a comfortable living from proto feminist writing.

With Creditors, according to the thesis of a high school teacher and pedant, Gustav, Tekla has sucked the life out of Adolph. He has literally become a cripple. That’s a theme in the works of Munch like his versions of “The Vampire” where docile male victims are exsanguinated. Images by Munch often reflect his tormented relationships with women.

The skill of Strindberg is such that in the masterful writing of  Creditors we go back and forth in our feelings about the characters. The vengeful Gustav may be evil and manipulative but in the dénouement of ersatz apologies he is not without justification.

Although Gustav is a teacher rather than professor Strindberg, perhaps mockingly, uses him as a vehicle for aesthetic theories. Referencing Tekla's scathing novel about their marriage he observes that it is easy to write in autiographical mode for a first book. This is the low hanging fruit. But one only truly becomes a writer with the second and subsequent books.  There was a discussion of the illusionism/ impressionism of ephemeral painting compared to the solidity and thingness of sculpture. Here one equates the absurdist but true advice of Polonius.

While Adolph evokes empathy for his weakness and suffering he is also petty and too willing to trust a manipulative stranger and conjurer rather than the woman he married. It takes just a bit of conversation to mistrust and plot to entrap her.

The interaction of Gustav and Adolph is so long and absorbing that we don’t know what to expect when we finally meet Tekla. The performance of Wold unfolds gradually as she plays her hand with consummate skill.

We are aghast when she crawls onto his crippled lap in disarming role play. She insists on a game/relationship of brother and sister. She is written as older and more sophisticated. Did she leave Gustav because of love for Adolph or for a less oppressive companion? Is she indeed responsible for his psychic demise and physical infirmity. He no longer trusts his success as a painter which requires skill at illusions. Following the lead of Gustav he has turned to sculpture.

The play hinges on the emotions and responses of Tekla. She is accused by the jealous Adolph of being an aging flirt. No woman likes to hear that. Her defense is that she is attracted to all kinds of men including younger ones. That was a revolutionary declaration in the 1890s and may well have turned the audience against her.

But she is a woman on a second marriage and that has advantages. That gives Gustav a line “That’s why one ought not to marry anyone one hasn’t been already married to — at least once.”

The explanation of Creditors comes from him. Going back to the Biblical notion of chattel divorce means that something has been stolen from him. The thief, Adolph, must pay and he wants revenge on Telka. Adding insult to injury her book ridiculed him among friends and students have laughed at his expense. Like Mephistopheles he has come to collect on a devilish debt.

Toward that end he is a serpent seducer. Alone with Telka he reveals his charm and lingering hold on her. In a moment of weakness she invites him to her room when Adolph will leave the island on the 8 PM ferry.

The subsequent reversal leaves him triumphant and Telka outed as a whore. She has been tricked/ seduced into cheating on her husband. There is complex writing that shows her ambivalence.

“I feel you’re trying to steal my soul,” Tekla says. “There is no soul,” Gustav responds.  To that archly Nietzschean notion she responds “I know, I know, I know.”

Since God has been dead for a very long time that exchange surely meant more to an audience in 1890.

It underscores the many aspects of how Creditors was so prescient that it plays as contemporary in 2018. It is so powerful and provocative that S&Co. took 128 years to feel safe enough to produce it. To be sure it’s high time and worth the wait.