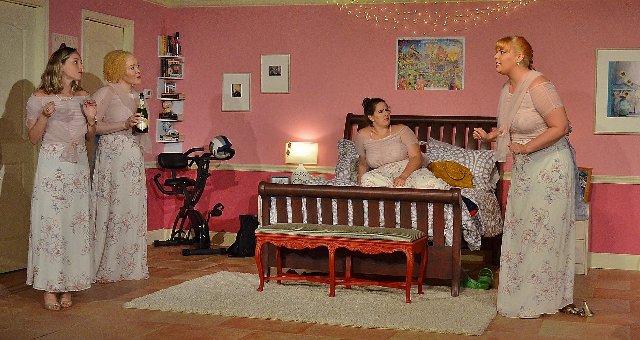 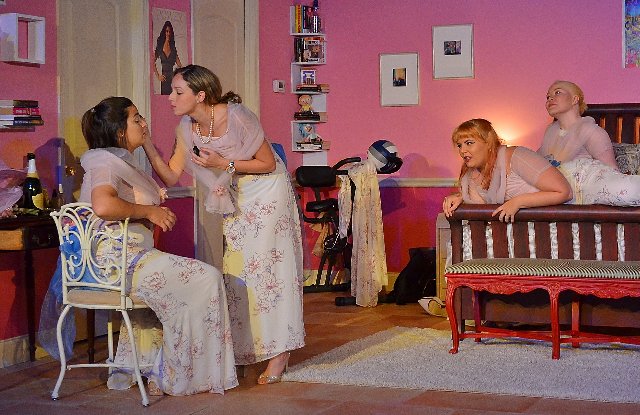 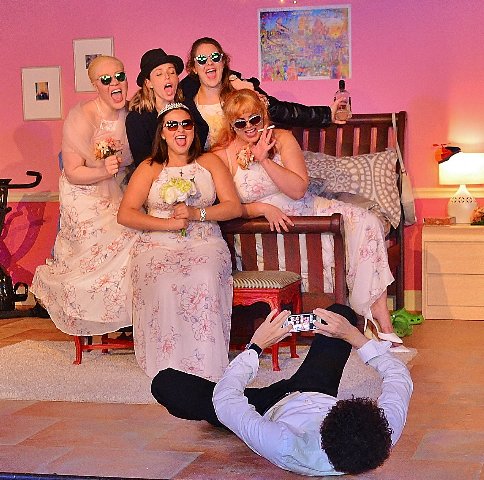 Photo by Dennis Lyzniak Tripp (Kevin Rubi) gets himself into what he feels is the best position to snap the perfect photograph of the reluctant bridesmaids. 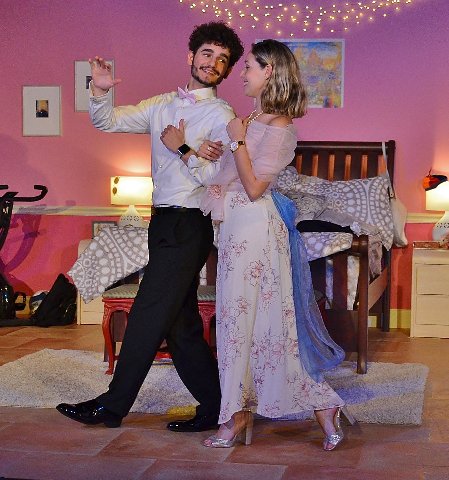 Photo by Dennis Lyzniak Tripp (Kevin Rubi) and Trisha (Amanda-Lynn Williams are a romantic couple at the end of the play.

Five Women Wearing the Same Dress may not be the most original play in the feminist/female power/sisterhood genre.

But if you’re a woman who feels limited due to society’s expectations of females, this Alan Ball piece will embolden and make you laugh frequently.

The women who populate the world of Ball’s comedy-drama aren’t going to take it anymore.

They’ve had it with a male-dominated society that, even in 2018, retains remnants of the Victorian age. Sure, we’ve made strides. Still, members of the female sex lag behind their male counterparts. Moreover, some say that expectations our society holds for women don't give them the same chance at happiness that men enjoy.

Certainly, the characters feel this way in Ball’s play. It runs through Aug. 12 in a solid production by the Miami Lakes-based Main Street Players.

The women are bridesmaids on the day the play is set. For different reasons, each would rather not participate in either the wedding ceremony or the after-reception held in a mansion. So, they hang out in the bedroom belonging to Meredith, the bride's sister.

Sure, the plot is thin and the play can feel static and talky. However, there are deliciously juicy, hyper moments of gossip and spilled secrets. In fact, one hushed incident from the past would no doubt enrage anyone – especially #MeToo activists.

Director Tatyana-Marie Carlo has moved Ball’s play from Knoxville, Tenn. to Miami in order to convey a south Floridian character. In addition, she’s dispensed with architectural details that lend an historic character to the mansion. But none of this detracts from the playwright’s intentions.

A sense of female power, pride and defiance fills the air of Meredith’s bedroom. It’s rendered cozily and spaciously by scenic designer Amanda Sparhawk. Pink is the dominant color.

That choice, at first glance, might seem natural and obvious. But in a way, it’s curious. For instance, consider that the playwright seems intent on changing people’s perceptions of what women are supposed to prefer and how they’re supposed to act.

To be sure, pink is often associated with femininity. But Meredith is a not your typical female. Consider, for instance, her $500 motorcycle jacket.

While Meredith may be different, she's one with the other characters. It’s no accident that each of these women wear the same dress, representing the work of costume designer Ingrid Ojeda.

This outfit might metaphorically suggest our male-dominated society’s belief that all women are the same, and therefore adhere to uniform expectations and principles. But if you look closely at the costume, contrast and tension exists. The white dresses, which sport flower patterns, include pink roses and blue sashes. While these characters might be unhappy having to wear the same dress, it unites them in their desire to enter a male-centric world.

Meanwhile, director Carlo's staging reinforces the women’s solidarity. For instance, she positions them close together during certain scenes. Carlo also finds ways to suggest that society will not silence these women. At least one of them, during at least one scene, stands atop Meredith’s bed, as though speaking for everybody to see and hear her.

Despite the characters’ commonalities, they're divided. For example, Frances, a fundamentalist Christian, notes that she’s an ardent follower of the Bible.

“Frances, has it ever occurred to you that the Bible is a book that was written by men?” Trisha responds.

This question spurs a brief debate about freedom of speech and religion's connection to values. The normally sweet Frances even has a temper tantrum, leading to an ultimatum. Curiously, she’s tolerated the women’s behavior this long without at least threatening to leave.

"I will not tolerate you making fun of the Bible, she stresses.”

These characters sometimes suggest stereotypes. But, at least Ball has written them as people capable of exhibiting more than one characteristic.

Frances undergoes one of the biggest changes, from introverted and quiet to more open and part of the group. In fact, the playwright metaphorically suggests this change at the opening of Act II. It begins with the others performing a makeover on Frances. Eventually, she even dares to drink alcohol, albeit “to holy matrimony!”

For the most part, these performers, several of whom are recent college graduates, deliver strong, energetic performances. They veer into rowdiness when necessary, without forcing it. They also nail Ball’s snappy dialogue, dry wit and more dramatic material.  However, sometimes cast members appear to be anticipating their responses to lines. As a result, spontaneity is lost.

Nevertheless, these young, talented actors demonstrate an ability to disappear into a character.

For instance, Lorena Estevez seems born to play Meredith. She invests her with a domineering, rebellious streak...and a rudeness that might even shock Trump.

Surely, if these characters were an orchestra, there wouldn’t be much variety. Loud and defiant sounds would dominate

One of the exceptions is Frances. Icela Marliese plays this shy woman with a sweet countenance that belies her rigid, dogmatic religious beliefs. Still, the performer makes it loud and clear that there are some things she won’t tolerate.

Speaking of tolerance, Georgeanne’s level seems to be low when it comes to emotional pain. She’s strongly hurt by her failed marriage. Unfortunately,  Thiana Berrick sometimes doesn't authentically convey the extent of the pain.

On the other hand, Rei Capote is a believable force as Mindy, a wisecracking, stereotypical lesbian with a loud mouth and a commanding presence.

By contrast, Amanda-Lynn Williams tackles the more understated role of Trisha. She invests the character with an eye-rolling, cynical attitude, especially toward men. To her credit, Williams softens Trisha’s stance when she falls in love with usher Tripp. Kevin Rubi plays him as a charming, suave young man with a fun-loving streak and a hint of bad-boy naughtiness.

Obviously, not every theatrical production will be flawless. Still, as a professional company after decades as a community theater, Main Street Players continues to prove its prowess in producing quality live theater.

Five Women Wearing the Same Dress continues through Aug. 12 at Main Street Players’ venue, 6766 Main St. in Miami Lakes. Tickets cost $25 for students and seniors as well as $30 for adults. Curtain times are 8 p.m. Friday and Saturday as well as 2 p.m. Sunday. For tickets and more information, visit mainstreetplayers.com or call (305) 558-3737.