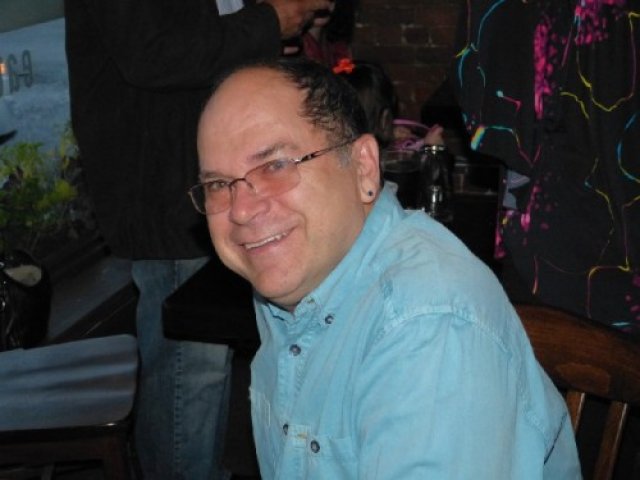 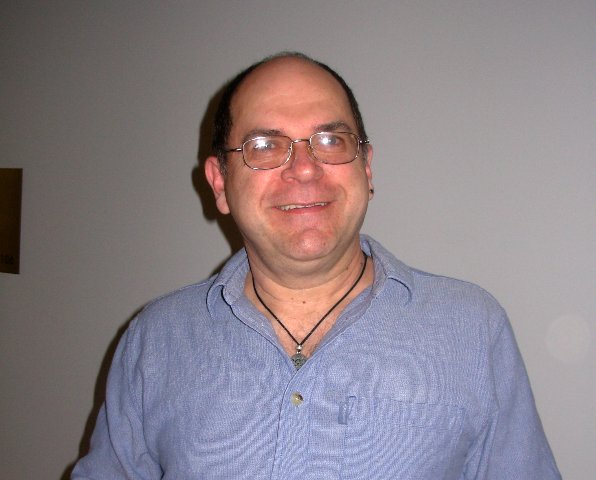 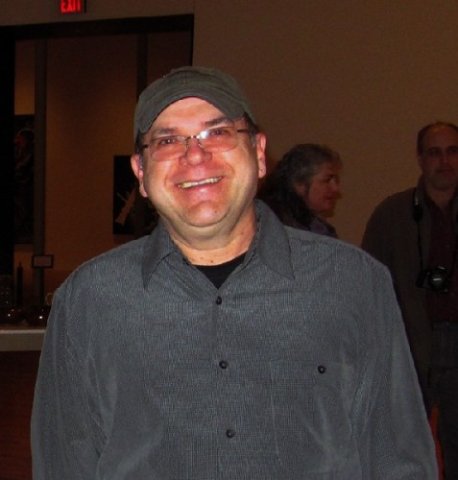 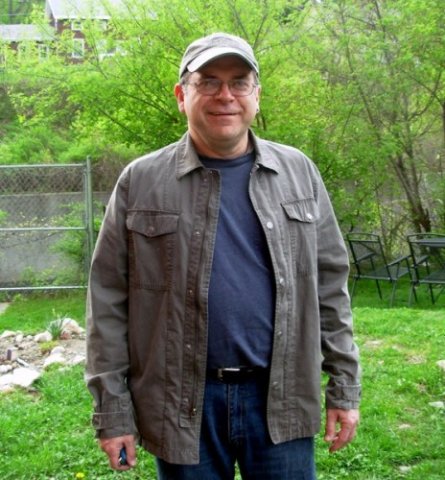 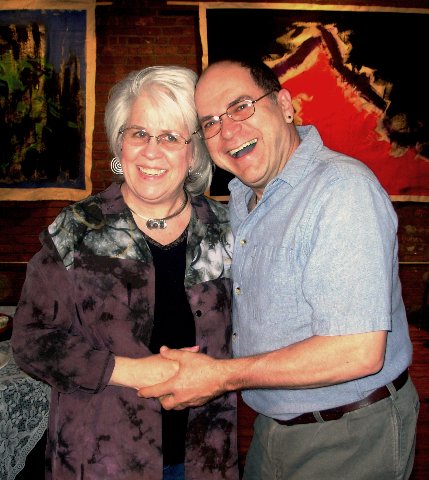 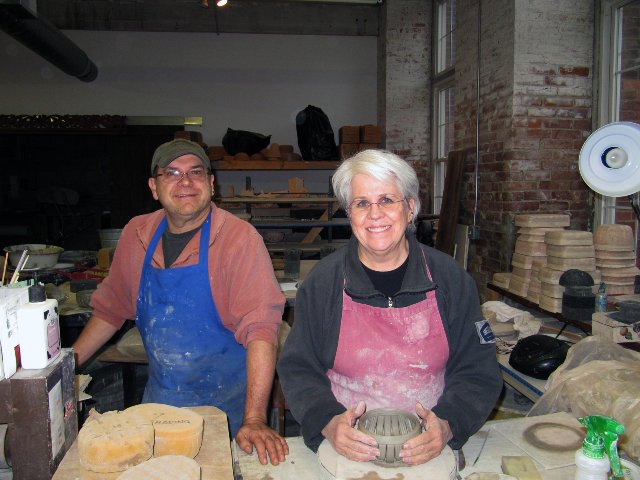 Together in the studio. 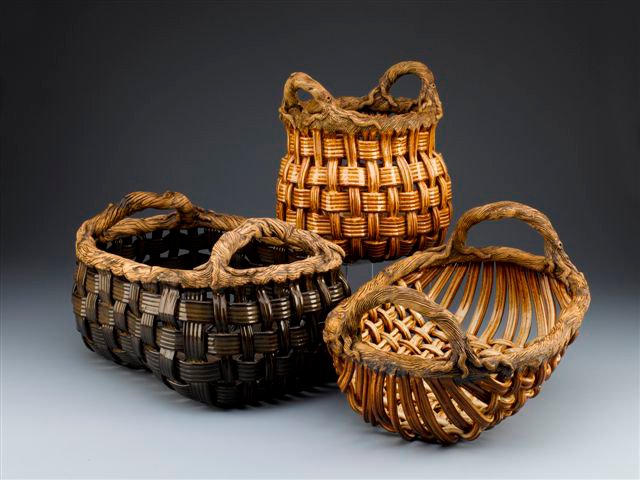 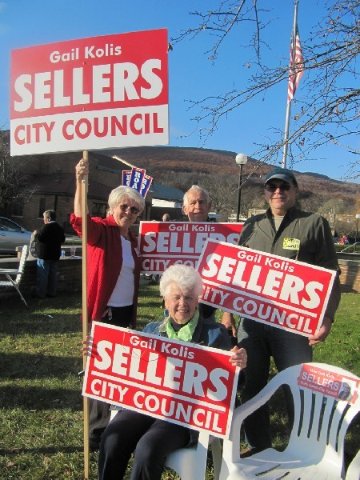 When Gail ran for City Council. 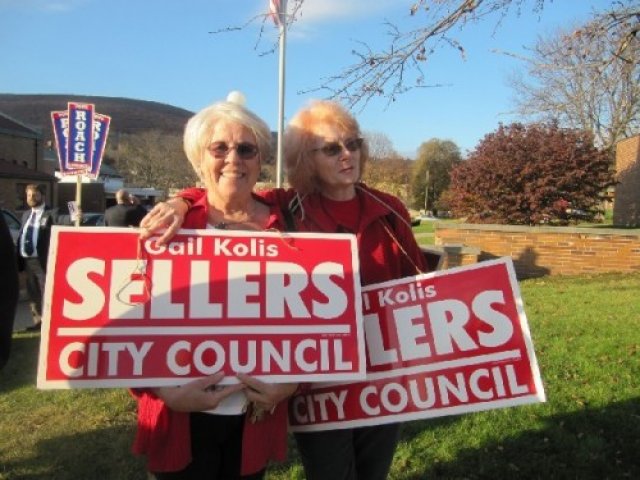 Gail and Astrid on election day. 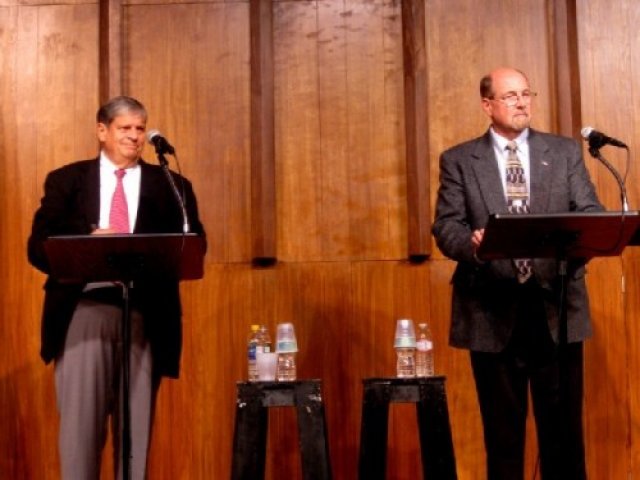 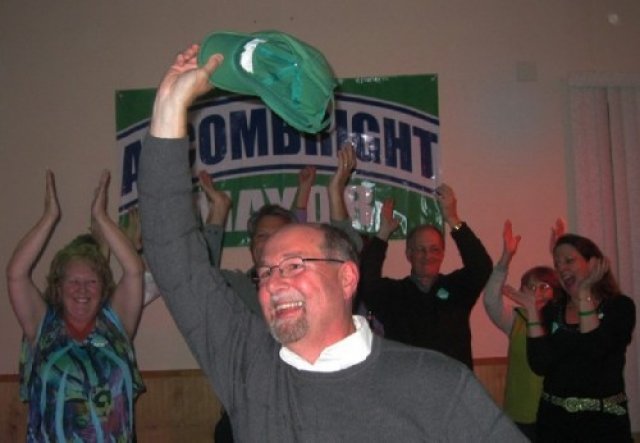 The night when Dick won. 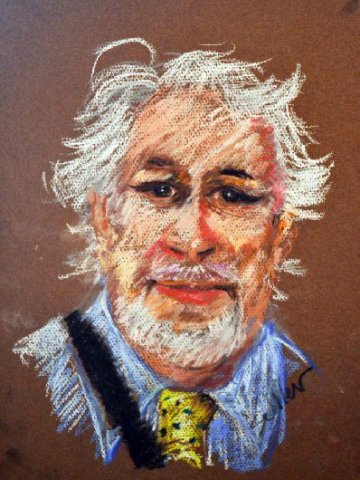 Phil created a pastel portrait of me. 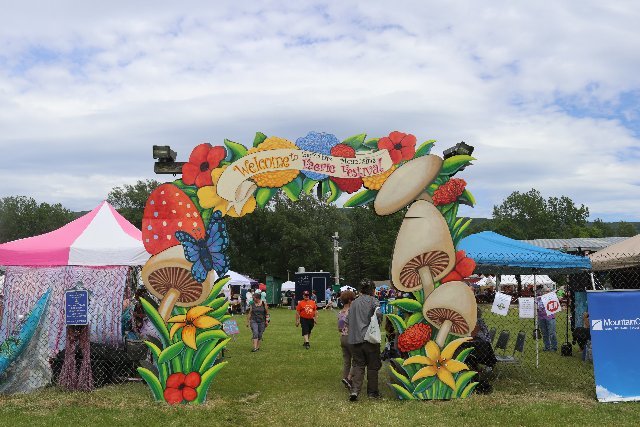 Entrance to the annual Faerie Festival in Adams. 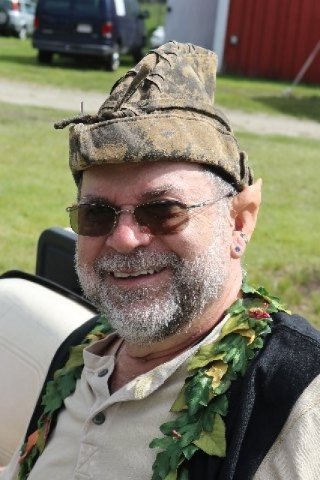 Phil entertaining kids as an elf. 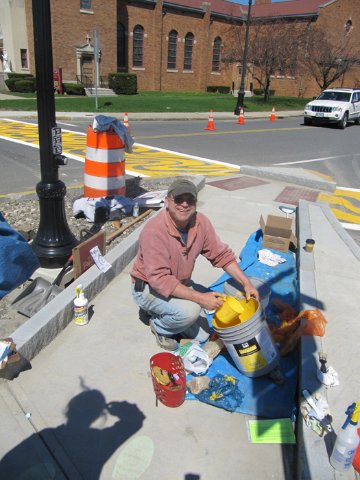 Phil at work on a public art project. 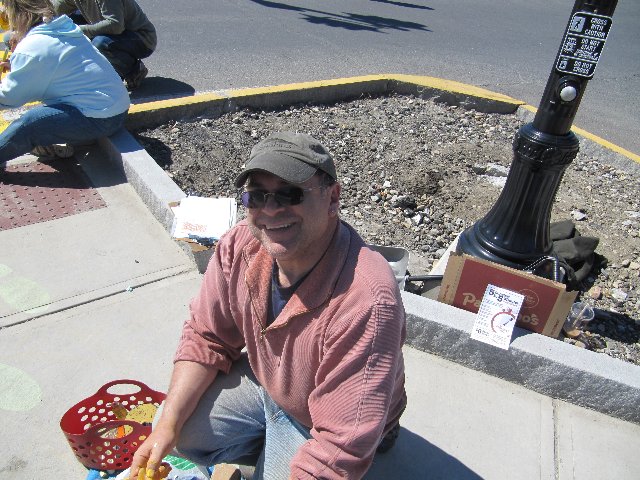 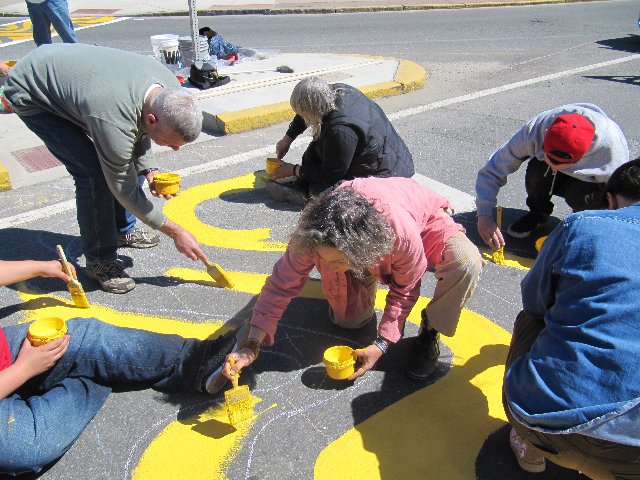 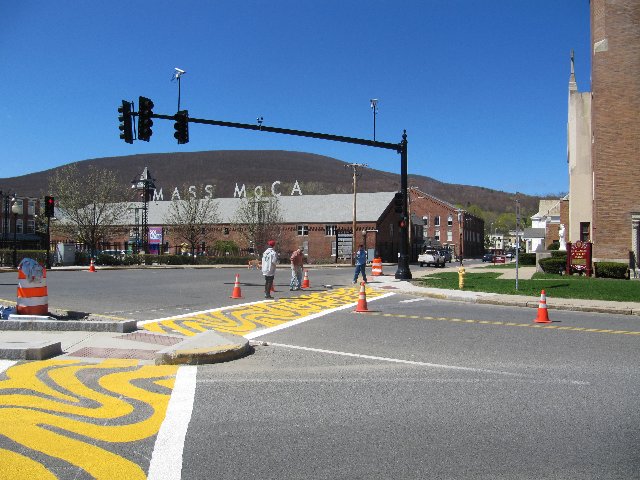 Cross walks next to MASS MoCA. 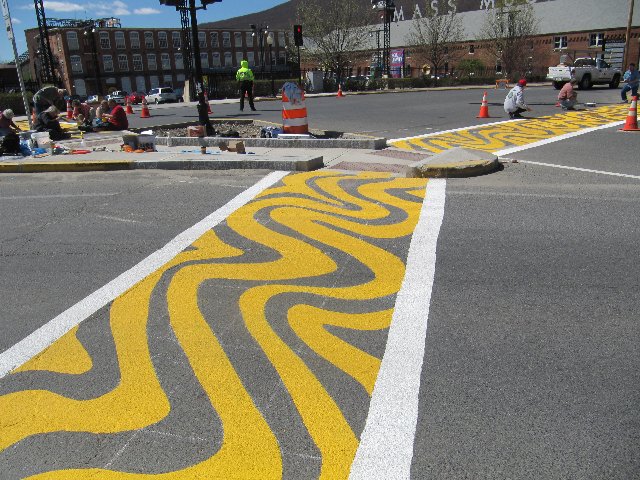 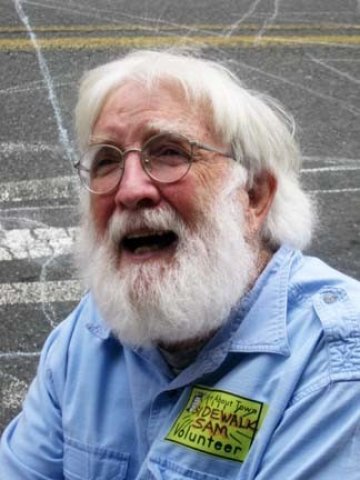 A project with Sidewalk Sam. 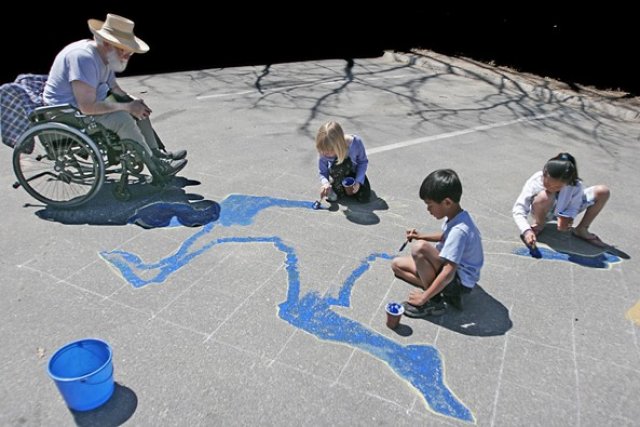 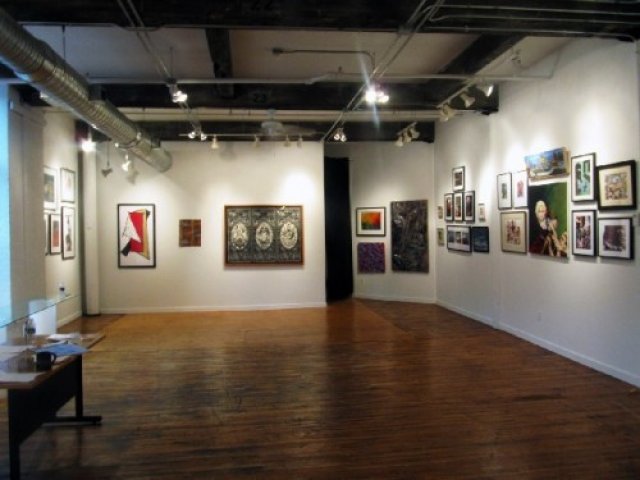 Installation of an annual Berkshire Salon. 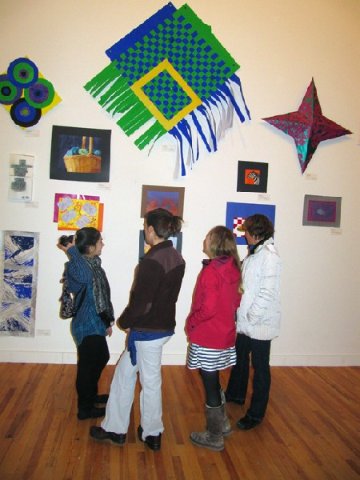 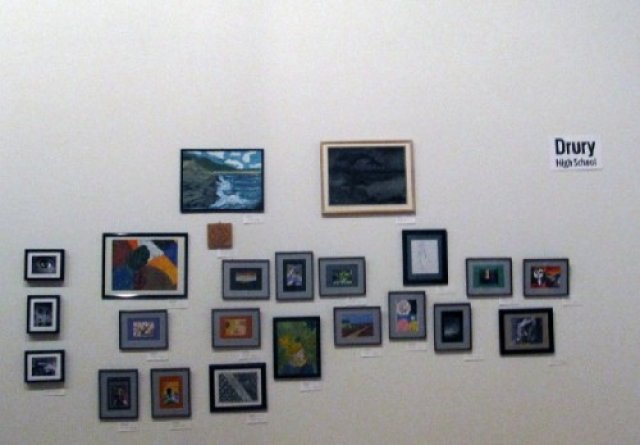 Clusters or works by students. 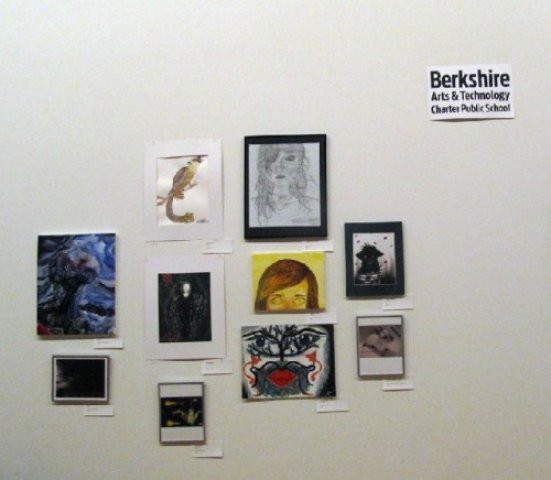 Another school on view.

On Wednesday, July 22 we lost a neighbor and friend, the artist and activist, Phil Sellers. One rarely referred to him as Phil. It was more common to say “Gail and Phil” as he was hyphenated with his wife Gail Kolis Sellers.

Together they operated River Hill Pottery out of a studio and shop just inside the entrance of the Eclipse Mill in North Adams. The door was always open and it was a norm to drop in and chat. Sometimes to sit with them in the studio while they wove clay baskets.

In addition to selling their wares to visitors they also participated in a circuit of summer craft fairs. Gail engaged visitors and promoted the merits of the arts in busy North Adams.

While working artists they were also community participants and activists. They seemed to attend a great many meetings and initiated arts and political events.

They were at the forefront of unifying artists to oust long-term mayor John Barrett, III. When he was defeated by Dick Alcombright, the former mayor was vocal in blaming artists for his removal.

Phil often referred to the mayor as Dick. They formed a personal bond and the mayor helped them with ambitious public art projects. Organizing a crew of friends, they painted downtown crosswalks with ersatz Sol LeWitt geometric patterns. They recruited the Boston artist, Sidewalk Sam, to create a design for a closed street. The plan to create a huge parking lot near MASS MoCA never came to fruition.

They alternated drives to Ohio and Phoenix to be with their family and grandchildren. This past winter, a trip to Phoenix lasted longer than planned because of the pandemic. They finally got a flight home in June.

Because of quarantine, however, we didn’t see much of Phil and Gail. While in Phoenix they often posted on Facebook. Phil was getting back to painting and posted a number of colorful, abstract, expressive works on paper.

They were active in the Eclipse Mill community. Phil served a term as board president and they for a time headed the gallery committee. They initiated a very successful spring local student art exhibition. It was later shared with and then appropriated by MASS MoCA. They juried a national exhibition of mugs that was very successful. For that project they recruited many of their potter friends. There was a fundraiser in which neighbors and friends visited the studio to paint mugs which were sold. They helped to organize the Berkshire Salon a non-juried show that launched the gallery season on Memorial Day weekend. That event drew a strong representation of local artists with a huge opening. A fun annual event entailed carving Thanksgiving pumpkins.

For the past few years their primary focus has been on the ambitious Faerie Festival in Adams. In the spirit of the occasion Phil wore pointy ears as an elf. The event is cancelled this year because of the pandemic.

Phil was born on September 21, 1948 in East Cleveland, Ohio. He graduated from the Kansas City Art Institute, in 1970, with a BFA. Phil met Gail at the Institute. "It was one of the few schools in the '70s that offered a BFA in a four-year program. Most of the art schools just offered diplomas. Six of us went for interviews and they accepted four of us. I went with my friends. We had a great high school teacher, Al Beck, with whom I later reconnected. He didn't teach us techniques so much as learning to think outside the box. To realize that art is in everything you look at. I would love to go back to painting. I hope that being in the Eclipse Mill eventually allows that. In high school I was very good at drawing portraits."

Some time ago we discussed his life and career over a beer and burger.

At first, he struggled in the portrait classes on Saturdays at Cooper Art School in Cleveland. When he came back for the next semester there was a change of instructors and he thrived under the teaching of Jose Cintron. "We drew the scull" he said "So you understood the structure under the features. I haven't done portraits since 1977 but would like to go back to it."

For a time, Phil was an art teacher. He enjoyed teaching but not the administrative aspects and creating lesson plans. Gail taught for many years. I asked about Gail and was surprised how they got together. "While living in Ohio my family vacationed on Cape Cod" he recalled. "I thought the Massachusetts girls are so beautiful that l'm going to marry one. I feel that fate always grabs me and gives me what I want. I have always believed that. You have to keep your eyes open. If you snooze you lose." Gail was that Massachusetts girl from the Kolis family in Adams.

Their business started in Ohio. Phil worked with a couple of assistants, creating a production line of pottery. For many years Gail taught school. He described having little social contact. That changed with the move to North Adams.

"Because many of the visitors are on their way to MASS MoCA we have met people from all over the world" Phil observed. "They come in wearing their MASS MoCA admission stickers. We have a remarkable ratio between visitors and sales. Now that we are living full time in the Mill, we have seen annual sales double each year as more people know of our work. We do five major shows each year and also wholesale to a number of shops and galleries. Originally, we did about 75% wholesale but now it is more like 50% with the other half of sales out of the studio and through shows."

I asked about the motive behind their activism, the months, for example that go into events like the annual Open Studios which have seen and ebb and flow over the years.

"I'm not sure why I'm doing it" was his response. "Partly, I didn't think anyone else would step up to the plate. I came here from Ohio where I never got involved in anything. In Ohio taking on a job like this I would be so nervous and scared. Here, my response is 'Let's do it.' My vision for Open Studios is; what would happen if it was a whole weekend long event. We are trying to see if we can have something happen on Saturday night after the studios close."

For the most part Phil was an understated, laid-back kind of guy. In social and political situations Gail generally spoke up. Over a beer he was surprised by my probing. "You are finding out a lot about me." We laughed about that and it is how I will fondly remember him.